Power to the people.

A regular Off Grid Ham reader tipped me off about an effort to privately-fund shortwave broadcasts to Ukraine. After a little fact-checking, I have determined that this is not just whimsical talk. It’s going to happen. 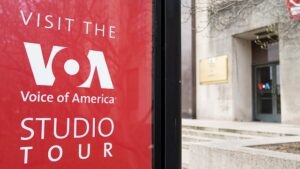 A lawyer in California has launched a crowd funded effort to buy airtime on USA-based shortwave station WRMI to rebroadcast Voice of America programming to Ukraine and Eastern Europe. As the VOA is a Federal government entity, any material it produces is public domain so there are no licensing or copyright conflicts.

An online campaign has already exceeded the $10,000 initial fundraising goal, but as the war drags on they are going to need more money. According to an article on the political website TheHill.com, organizers hope to add languages and broadcast hours as the funds allow.

The grassroots effort has the support of some former VOA staffers, who are providing technical assistance to the project. Shortwave Broadcasts to Ukraine

Regular readers of this website know I’ve been beating this drum for a long time. Due to international events, wars, and foreign government leaders who do not have the slightest shred of decency or respect for personal liberty and human rights, the need for democracy-based shortwave broadcasts has never been more urgent.

Unfortunately, as most of you also know, democratic governments have for the most part abandoned the international HF bands. Even as the need is so glaringly obvious, many of these governments, including the USA, refuse to turn their transmitters back on. The end result are entire populations who have no option but to get their news from censored websites (if they have internet connectivity at all) or state-controlled local media.

My libertarian proclivities tell me it’s great that people are willing to put up their own private money to pay for this effort. On the other hand, communicating the ideals of democracy to other countries is a legitimate function of the Federal government. Private money should not be needed for this. It’s nowhere near to filling the entire need, but I hope we are in the nascent stage of a shortwave revival.

I have personally donated to this cause and encourage Off Grid Ham readers to join me in supporting these broadcasts. If you believe in radio, if you believe in freedom, then here is your chance to play an active role in sending a message of liberty out across the world that cannot be stopped or censored.

This is probably not the last you’ll hear about this on Off Grid Ham. Stay tuned.

You can help. shortwave broadcasts to Ukraine

Donate to the campaign by clicking here