Where I live in the upper Midwest USA, we were unusually lucky to have an extended warm Fall season. In early November we were still seeing highs over 70F (21C). I was raking leaves wearing shorts and a t-shirt! But ahhh yes, everyone knew the luck would not last. In literally a few hours the temperature dropped into the 30s (1C). We likely won’t see 70 again until next Spring. It’s time to go over what cold temperatures do to lithium batteries and what you can do to mitigate the negative effects.

There are several types of lithium batteries. The internal chemistry is different between the types, but they all more or less act the same as the temperature drops. To keep things simple, I will use the generic term “lithium battery” to refer to all variants.

As a lithium battery cools, the chemical process that creates electricity slows down and the internal resistance of the battery goes up. This results in a lower capacity and longer and more frequent charge times.

To be clear, even with these shortcomings lithium batteries still vastly outperform their conventional cousins. For example, at 0F (-17C) a lithium battery will still retain greater than 90% of its capacity, while a sealed lead acid (SLA) battery will have only 45% capacity. To lose over half of your SLA battery power solely from the cold is a huge deficit that is hard to make up.

There is a range of temperatures lithium batteries prefer for proper operation. It’s important to know that the temperature ranges for charge and discharge are not the same.

When researching data on operating temperature ranges I discovered the numbers varied a little across different reference sources. Generally, a lithium battery can be safely discharged when it is between -4F (-20C) and +135F (57C). I’ve found other on line specifications that extend these limits to -14F (-25C) and +165F (73C). In either case, it’s is a very generous range, especially at the high end. These parameters should work for nearly any off grid amateur. 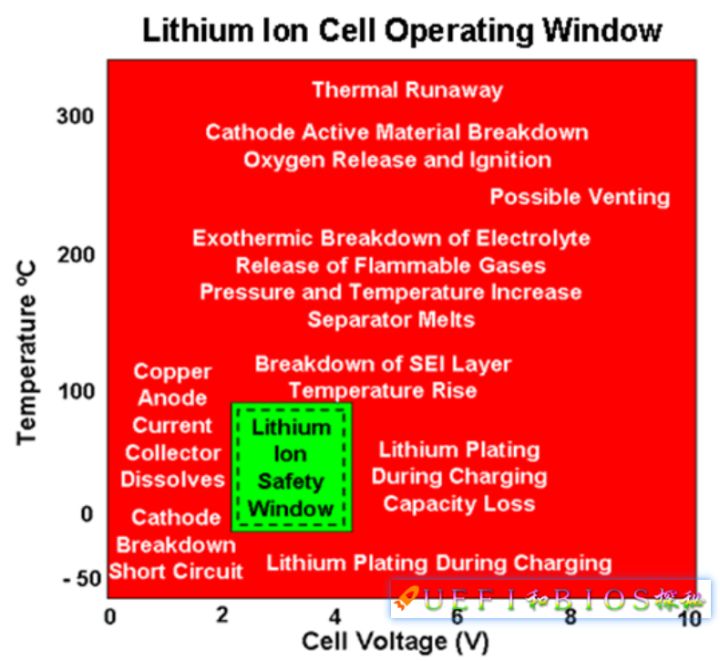 Charging a lithium battery is another matter. The window is much tighter, and the data was consistent over several sources. Lithiums should never be charged if over 122F (50C) or under 32F (0C). Although that 122F upper limit sounds generous, it is well within possibility of an enclosed car on a hot day. At the low end, 32F is somewhat restrictive.

Technology does most of the thinking for us.

Fortunately, there is no need to monitor battery temperatures or worry too much about anything. Lithium batteries have an integrated Battery Management System (BMS). The BMS is a microprocessor complex that performs several important functions: Protection against overcharging, excessive discharging, and overcurrent. It also manages cell balancing, prevents damage from short circuits, and excessive temperatures. If you try to charge a battery that is too hot or too cold, the BMS will not allow it.

Important note: Not all BMS systems have all functions. At a minimum they should handle cell balancing, charging, and protection from shorts. The other functions may or may not be included. Next-generation BMS systems are on the horizon. They will provide very detailed real-time data on battery characteristics and performance. Right now advanced BMS systems are used mostly on electric cars and industrial applications; let’s hope the tech trickles down to the smaller hobbyist batteries soon.

Technology makes lithium batteries a “set it and forget it” device. The only required maintenance is to keep the terminals clean & tight and charge them at least every few months. As long as they are are not physically abused and operated within their design parameters, they will run trouble-free for a long time.

Keeping them going when the temperature drops.

There are several ways to keep your lithium batteries from letting you down in the cold, or at least mitigate the effects. Keep in mind that temperature limits apply to the core temperature of the battery, which is not necessarily the same as the ambient air temperature.

For small batteries, tucking a spare in a jacket inside breast pocket should provide enough body heat to keep the battery happy. If you have access to a heated tent, trailer, or other shelter, then that should be adequate. A car parked in the Sun is a great source of heat.

Suppose you can’t keep your lithium batteries warm, such as with a handheld radio. The good news is you can still use your batteries down to -14F (-25C). They will have reduced capacity as we already discussed, but you will not damage them. The bad news is that you cannot charge the batteries until and unless they can be brought to at least 32F (0C). It leaves you in a difficult situation. You’ll need to change out batteries more often due the reduced capacity, but you cannot charge batteries if they are too cold. The only solution is to carry enough extra batteries that are already charged.

The other consideration is the lifespan of the lithium battery. They are good for a finite number of charge cycles. If you are charging them more often because of reduced capacity in the cold, then you are using up your charge cycles more quickly. This isn’t such a big deal if you operate in the cold only occasionally, but if you regularly partake in outdoor winter operations then expect to replace your batteries sooner than you might otherwise expect unless you can find a way to keep them from getting cold.

We’re in a Renaissance.

We are fortunate to live in a time when batteries are going through something of a Renaissance. For decades, there wasn’t a lot of innovation. Amateurs traditionally had to live with nickel-cadmium, nickel metal hydride, and various forms of sealed lead batteries. Of course, we can’t overlook wet cell batteries, which have been commercially available for over 100 years. All of these batteries, while very good in their time, do not even come close to the performance of lithium. When legacy technology batteries get cold, their shortcomings over lithium becomes even more profound.

With some basic understanding about how lithium batteries work and how they behave in cold weather, radio amateurs can operate through the winter with few battery troubles.

7 thoughts on “Lithium Batteries In The Cold: A Guide.”