Charging, discharging, watts in, watts out, current, voltage, and other values can tell you what your off grid system is doing. Having data helps you plan your power usage and forecast problems before being caught short. A DC power monitor addresses all these issues and is inexpensive and relatively easy to install. They definitely add a stylish cool look, but it’s more than just vanity and bling. A DC power monitor is a practical and useful accessory. This is not going to be a product review or buyer’s guide. Our goal is to explain DC power monitors and some basic operational principles.

A quick search on Amazon and eBay returns dozens of options, most of which are less than $50.00 USD and many are are less than $20.00 USD. Renogy and Powerwerx offer a line of branded DC monitors, although the popular names cost more.  As an added bonus, modern units have features that place them far ahead of previous generations of DC power monitors.

The downside to cheap electronics is, well, they’re cheap, as in cheaply made. I usually recommend against buying junk, but in this case Off Grid Ham readers will quickly find that sourcing a quality DC power monitor is difficult even if you are willing to spend more. It’s is not a “mission critical” item. If it fails, you’ll still stay on the air. Furthermore, they’re so inexpensive most hams can afford to keep extras for spares.

There are two basic types of DC monitors: shunt-based and in-line. We’ll go over the difference between the two shortly. 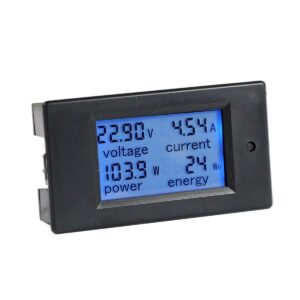 What should a DC power monitor do?

The new breed of DC power monitors do more than measure voltage and current. Many of them display watts, watt-hours, percent of battery charge and more. While individual needs vary, at a bare minimum you’ll want to know the voltage and current going out of your battery. It’s also useful to know how much power is coming in from your solar panels. Doing all this may require more than one DC power monitor.

In my case, I set mine up to monitor volts, amps, watts, and watt-hours going into and out of my battery. I already had a monitor keeping track of what comes in from the solar panels. However, I may also replace the solar panel monitor. I paid over $100 for it years ago as an accessory to my Morningstar charge controller and it is sorely lacking compared to the newer, much cheaper units. Maybe it’s time to upgrade that too. 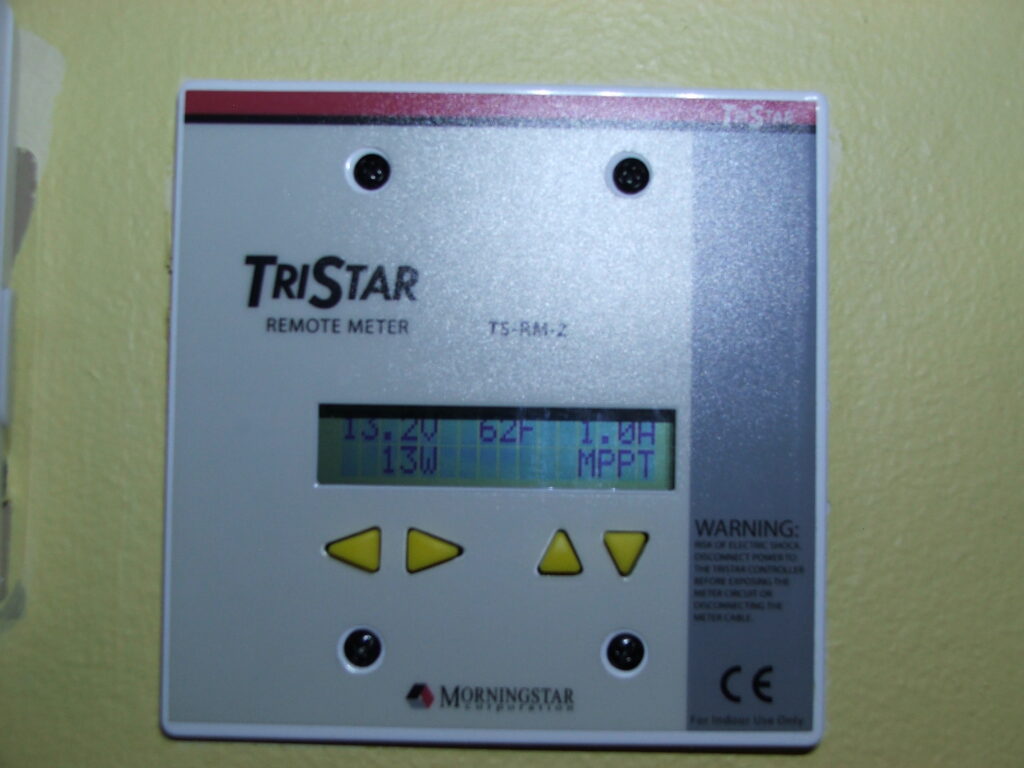 This Morningstar device monitors power coming in from my solar panels.

I didn’t know I needed it.

DC power monitors give a good picture of short and long term power consumption and how your energy is being used. I did not think I was going to care about watt-hours, but now that I have that capability, I find it helpful. The goal is to have more watt-hours going into the battery than coming out of it. If it gets to a point where there are consistently more watt-hours leaving the battery than entering it, I’ll have advance warning that I’m running out of juice. A watt-hour deficit implies several possibilities: 1) The battery is defective or approaching the end if its service life, 2) it is too small for the load it is pushing, 3) the system does not have enough off grid electric generation capacity, or 4) a combination of any of these issues. 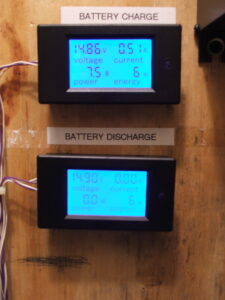 I noticed at one point I had over 300 watts of power coming in from the solar, but only about 60 watts of it was actually diverted to the batteries, and the batteries were not discharging. Energy does not magically disappear, so where were the extra 200+ watts going?

The answer was simple. The 200+ watts were being used to power radio equipment and other devices around my house. What this told me was, at least at that moment, the batteries were coasting along on a float charge while the solar carried the entire load. Monitoring these values over time can provide a real-world picture about how well your system is performing. Some monitors have data ports that will interface with a computer and do all the math for you. Others  do not have a physical display; they connect to your smartphone via Bluetooth and you can manage your system from there.

How can a small, cheap microprocessor device measure high currents without itself becoming a safety hazard? DC power monitors work around this problem by using a shunt. A shunt is just a fancy resistor with a very, very low value, usually in the 50-200 micro ohm range. The shunt is calibrated to drop mere millivolts across it. The drop is so small it will not effect the circuit but is still enough to be measured. Since the voltage drop across the shunt will vary according to the amount of current going through it, this variation is picked up by the meter and displayed as current. By the way, this is the same principle used in analog multimeters.

A shunt allows the user to place the display in a convenient location and connect it with light gauge wire. In theory it is safer because no high current or voltage is flowing through the instrument itself. The shunt can be located in a safe place away from the operator. One disadvantage to a shunt-based system is the physical size of the shunt itself. If you are using a portable “go box” type of system, a shunt will probably take up too much space in your kit. Also, it is an exposed conductor. When using a shunt, locate it so that accidental contact cannot occur. Having it in an enclosure is even better.

The shunt should be included with the monitor when you purchase it. If it is not, don’t worry. Shunts are inexpensive, easy to find, and come in standardized values.

In line power monitors do not need a shunt and all the circuit current flows through the device. Powerwerx sells this type of monitor, and there are others. In line DC power monitors come with their own pros and cons. For starters, installation is really simple and the device takes up very little space. As for the bad points: They must be physically located near the power source,  and since all the current runs through the device itself, the operator is exposed to a potential safety hazard.

As always, apply some critical thinking to manufacturer claims. For one type of in line monitor I researched for this article, the manufacturer states it will handle (continuously) 75 amps at 60 volts. That’s 4500 watts. Maybe someone out there is more gutsy than me, but there’s no way in hell I’d dare run over 4 kilowatts of juice through that thing!

As with anything involving electricity, use your head or you may end up in the emergency room. If it does not seem plausible, it probably isn’t.

Wiring your DC power monitor is fairly simple but methods will differ depending on what you want to monitor and the design of the device. Battery charging, discharging, and solar output will all have a different wiring protocol. Because of this, you will likely need a separate monitor for each value.

For shunt-based monitors, light gauge doorbell type wire can be used to connect the monitor to the shunt because no high current or voltage runs through the monitor itself. For my application, I used 22 gauge telephone central office frame wire. You’ll need at least two and possibly up to four wires from the shunt to each monitor device.

Monitoring  battery charge and discharge requires two devices, but they can be connected to the same shunt. The data sheet should show you how to wire each device to get the desired measurement. To measure charge/discharge with in line monitors, simply connect one monitor between the charging source (solar, wind, etc.) and the battery, and one monitor between the battery and the load.

DC power monitors for solar panel output cannot use the same shunt as the charge/discharge monitors. So, if you want to keep track of all aspects of your system, you’ll need three monitor devices and two shunts, or three in line monitors.

For those with go boxes and portable systems, an in line DC power monitor will best meet your needs. Its simple hookup and compact size make it an obvious pick. The typical go box setup will never get even close to a power level that would be concerning, so suspicious manufacturer specifications are not as much as a factor in these applications.

If you have a fixed home system or the physical accommodations in your portable station, choose a shunt-based DC power monitor. They are less expensive, arguably safer, and there are many more choices available. The connection procedure is a little more complicated than in line models, but once you’re over that hump you’re good to go.

One thought on “Add a DC Power Monitor To Your Off Grid System.”