Prussian-German scientist Gustav Kirchoff (1824-1887) was a pretty impressive guy. His research led to a series of electrical principles collectively referred to as Kirchoff’s Laws. Those of us who endured electrical engineering school or technical college are very familiar with Kirchoff. Yet, he’s not particularly well known among hams. We will change that by reviewing Kirchoff’s Current Law, what it is, and how it can be can applied to off grid amateur radio.

In engineering/science/math, there is no recognized criteria a concept must meet to be declared a “Law”. Generally, a genuine Law is a concept, statement, or equation that cannot be invalidated. Many of the scientific & mathematical Laws in use today have been around for hundreds or even thousands of years and have never been proven wrong. The Law of Gravity, the Pythagorean Theorem, and Ohm’s Law belong in this category.

It’s worth noting that simply calling something a “Law” does not make it so. For example, Moore’s Law is the principle that describes the rapid development of semiconductors. It is only 57 years old and it’s already been busted. If a Law can be invalidated, was it really a Law in the first place? That question is outside the mission of this blog, but it’s something to think about.

Kirchoff is the real deal.

Gustav Kirchoff rightfully earned his place in the pantheon of scientific Laws. We can use Kirchoff to analyze all sorts of circuits, but today we’ll focus on how it applies to off grid power. It is a practical, working concept useful to radio amateurs who want to better understand their off grid power systems.

Scientists describe Kirchoff’s Current Law (KCL) in many ways. The most popular are:

KCL is also known as Kirchoff’s First Law and The Law of Conservation of Current. KCL applies to parallel circuits too, but we’ll get to that later. It all makes logical sense. Current does not just magically disappear. What goes in must come out.

Meanwhile in the “real world”…

For the purpose of our analysis, remember that a “12 volt” solar panel actually produces 15-18 volts. To keep our math accurate we will use the highest rated voltage and current. The numbers used in the following examples are real. They were taken from the specifications of common solar panels available from numerous retailers.

If you are familiar with Kirchoff’s Current Law you will immediately know why without doing any math or taking any measurements. Let’s walk through it. Kirchoff says that in a series circuit, the current will always be the same at all points in the circuit. Meanwhile, Ohm’s Law states that in a series circuit the total voltage will equal the sum of all the source voltages.

The details on why it’s a bad idea.

Both “12 volt” panels are really 18 volts, so according to Ohm, the total voltage will be 36 volts. This is not a problem. A proper MPPT controller will very efficiently convert the 36 volts into 12 volts with almost no loss. But here’s why you’ll never see 150 watts: Your 50 watt panel is will not go higher than 2.69 amps no matter how much sun shines on it. Since Kirchoff says the current will be the same everywhere in the series of solar panels, the “speed limit” of the entire system will be 2.69 amps even though the larger panel is capable of more than double that.

The only way connecting solar panels in series works is if all the panels are the same voltage and wattage. In this form, they all create the same current and one panel is not “holding back” the others.

Think of it like a convoy of ships. The convoy cannot go any faster than the slowest ship. What can we expect from this poorly planned system? That part is easy. Thirty six volts times 2.69 amps equals 96.84 watts. You are gaining absolutely nothing by adding the 50 watt panel in series. Kirchoff explains why a full third of your potential wattage is off the table.

An off grid ham would have to connect the panels in parallel to access the 150 watt potential of this setup. The system voltage will drop to 12 volts, but each panel can produce full current independently of the other.

A parallel circuit is really two or more series circuits stacked together. In the illustration below, Branch 1 and Branch 2 are series circuits in relation to the controller, but not to each other. If we were to remove either branch/panel, there is still a complete circuit for the remaining branch/panel. Each branch will have its own unique current value; the sum of all the current in all the branches will equal the total at the controller. It would work the same way if there were 3, 5, or 100+ branches. Another way of looking at it, as current passes each node, the current is split off in two directions. The added total of current of each divergent path will always equal the current entering the node. 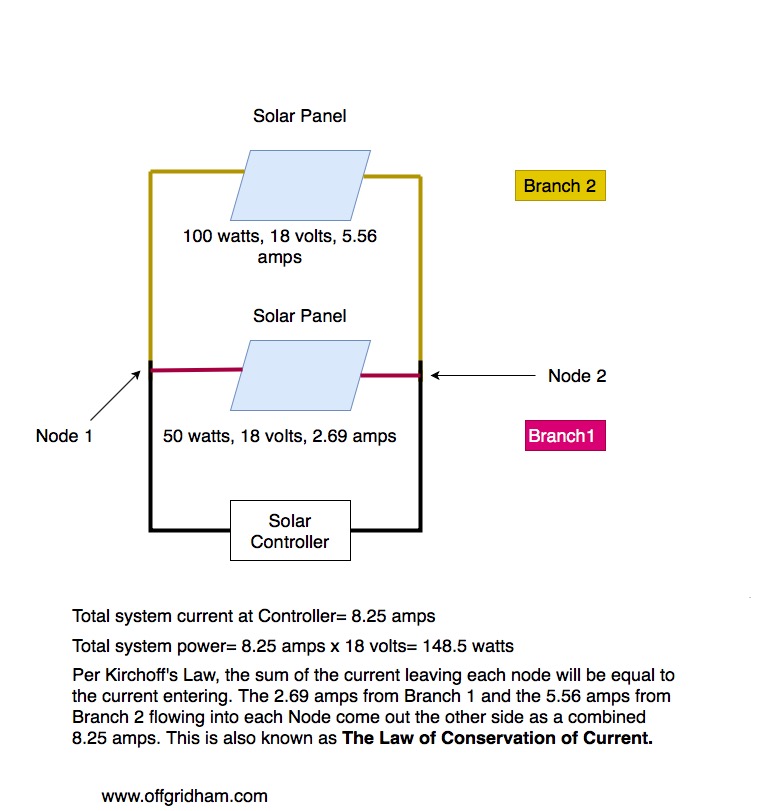 There’s another method to look at this. Any circuit can be represented by a single resistor in series with a single power source. This representation is known as Thevenin’s Theorem. It’s deeper and geekier that we need to go here, but if you’re game there is an ocean of information about it on line.

Since all solar panels have an absolute maximum current capacity, there is an inherent margin of safety (Disclaimer: This does not mean you don’t need to be mindful of safety protocols!). When working with batteries, power supplies, and commercial electric, things get a little more vague.

Batteries will not stop producing current at a firm ceiling. They have the potential to crank out current far beyond their design (as in a dead short circuit). If the current demand of a load exceeds the ability of the battery, one of two things will happen. 1) The battery will very quickly go dead and stop producing current. Or, 2) The battery or other circuit components will overheat and fail, or even start a fire. There is a third possibility that both 1 and 2 will happen. These scenarios can also occur with AC power supplies and commercial electric, although built in safety features reduce the risk.

Use Kirchoff’s principles to determine if the battery connection wire is appropriately sized. Also, make sure your system is fused. Lastly, mixing batteries of different capacities is a really bad idea. The smaller battery will be discharged before the larger which will ultimately drag down both. In a worst-case situation, the smaller battery can be overloaded while the larger battery operates below its capacity.

Gustav Kirchoff also developed a voltage Law that is similar to his current Law. While we’re not going to get into it now, it basically states that the sum of voltage differences in any loop circuit is always zero. This is a fancy way of saying that the sum of the voltage drops across all the loads in a series circuit will equal the voltage of the power source. Most hams already know this, even if they don’t know what it’s called.