2019 has been a great year for Off Grid Ham! We racked up twenty-two articles (including this one), tens of thousands of page views, and a growing reader base from all over the world.

It’s not lost on me that you readers are what make this website awesome. Without you I’m just some schlub talking to myself. Because of your engagement and feedback, it keeps getting better. Most bloggers simply describe their latest projects. I’m not knocking that…the blogs I follow are interesting and well done. But when I started Off Grid Ham back in late 2015, I wanted to go in a different direction.

I decided to address the topics that my readers wanted to talk about. That’s kind of hard when you’re just starting out and have no readers! The first year or so I had to come up with my own topics, planting the seeds, so to speak. Today, almost everyting that appears on Off Grid Ham has its origins in a reader question or comment. Off Grid Ham is one of the few amateur radio blogs where the readers have a great deal of control over what topics are covered. 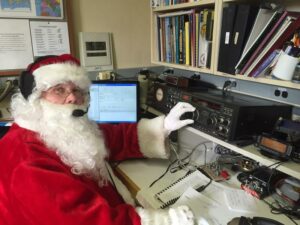 So before we go any further, I want to thank all the Off Grid Ham readers. Your support and encouragement is personally meaningful to me. It’s the main reason I keep doing this.

It is my hope that everyone who visits Off Grid Ham leaves as a more knowledgeable and competent radio amateur.

We went dark for a while.

2019 started off pretty rough. In February what was supposed to be a simple WordPress upgrade went way wrong and took the entire site down. Not only was the public-facing website completely offline, I could not even access the back end control portal to figure out what went wrong. GoDaddy, my webhost, was very responsive. As a result of this incident, Off Grid Ham now has extensive cybersecurity features including a firewall, SSL, security scans, and daily full site backup. If your computer picks up a virus or malware, you sure as heck didn’t catch it here! Total downtime was about three days, and it took another few days after that to get reestablished in the search indexes.

Once the “one click disaster” was in the rear view mirror, we quickly moved on. Batteries were a hot topic. Three articles were battery-related, and I’m planning another for early 2020. Its not surprising, since batteries are what makes off grid amateur radio happen.

The ham radio rumor mill was busy in 2019. Two big ones, “they’re taking two meters away!” and “California kicks hams off their towers” kept many otherwise sensible people running their mouths long after the gossip had been busted as fake news. Off Grid Ham called out these stories for the complete bullshit they were. I hope I’m never given a reason to go down that road again, but if needed, I’ll be there. Unlike the clickbait junkies who will cheerfully sell out their credibility to generate traffic, this website is committed to not posting anything unless it has been carefully vetted and fact-checked.

In 2019 OGH had a fair number of commentary and what I like to call “inspirational” articles. These articles are not technical in nature. They are either opinion/commentary on some relevant issue, or are intended to motivate amateurs to be better amateurs. One of these pieces, The Transmitters of Freedom Should Be Turned Back On! generated the biggest response of any 2019 post. I’m on the fence on whether or not to do more of these types of articles. They are well received but don’t really teach any new skills. Please let me know how you feel one way or the other.

This year Off Grid Ham also partnered with a reader to launch a google.io forum page. The google group is open to anyone, and it’s a great place for readers to connect and exchange ideas. Stop over there are join in. Special thanks to the reader who set up and runs the page.

If you’re interested in a used radio and don’t know what to look for, then there’s some help for you. Back in April I posted an article describing how to shop for a used radio. Most amateurs are honest, but sometimes even they don’t know what they have. Knowledge is power, so make sure you know how to tell between a diamond and a dud for before you go shopping.

Why are there so few on air nets for off grid hams? A reader asked this very question, and Off Grid Ham investigated. For many reasons, there just aren’t that many.

2019 was a good year for site growth, but it should have been better.

This year I was really hoping to exceed site traffic from 2018. As of this writing, Off Grid Ham is on track to increase page views and unique visitors over 2018, but just barely. Back in June, site traffic suddenly took a dive! This remarkable drop corresponded with WordPress doing a major upgrade to their platform. I’m not sure if it was just a coincidence or if something WordPress did goofed up the numbers, but it definitely hurt. That plus the opportunities lost to the website crash in February squished my goal of beating 2018 metrics.

By the end of the summer, traffic volume bounced back to normal. I’ll never know if it was just a slow period or if WordPress underreported my metrics for three months. In either case, Off Grid Ham is growing thanks to the goodwill of its thousands of loyal monthly readers.

And the winner is…

The most-read article of the year was actually from 2016. This post about portable antennas by itself accounted for about 10% of all 2019 site traffic. Not bad for a three year old article! It was #1 last year too. For whatever the reason, hams are seeking information about portable antennas. I’m happy to accommodate them. Due to the popularity of this article, I might do a follow up next year.

And speaking of next year…

I’m looking forward to taking Off Grid Ham into its fifth year. As for what topics will be covered, well, that’s up to y’all. My vision of having a reader-driven amateur radio blog is producing results, and I’m excited about what comes next. Please keep the ideas and suggestions coming. Contact me either by making a comment on an article or sending an email via the contact page. I personally read every single comment and email. I don’t always respond, but I promise that your thoughts will be seen and considered.

The readers are what really make Off Grid Ham what it is. Off Grid Ham does not do any paid promotion. In fact, there is very little promotion at all. Every time an OGH article is reposted elsewhere on the internet, or passed along in a club newsletter or on-air net, the circle gets a little larger. It’s a grand compliment, and I’m grateful. Thank you very much for the encouragement and support. We’ll see you in 2020.