A lot of great info in one easy click.

I find a lot of information about off grid amateur radio on the internet. Unfortunately, I have to sift through a great deal of mediocre content to find one worthwhile item. This article from the Dialtone Blog  about buying a used radio is that rare “worthwhile item”. It was written with scanners in mind but it can apply to any used radio. The article includes some great photos and is an excellent investment of your time.

I do have a few things to add to the Dialtone Blog’s excellent used radio buyer’s guide.

Batteries can be tricky.

Bringing known good batteries is a good idea but many radios have proprietary batteries. Unless you know you will buy a specific used radio, bringing a battery may not be a realistic option. To further complicate matters, if you are shopping at a swap meet you may not find your specific used radio. Maybe you’ll see a an entirely different rig you like better. Swap meets are a hit or miss affair. You don’t know what you’ll find, and you may end up with something that wasn’t on your radar.

Unless you have very high confidence in the seller’s honesty, then assume that you’ll have to replace the battery. As Dialtone very correctly points out, a new battery may cost more than what the used radio is worth. Carefully consider the cost-benefit factors.

Give it a shake, and look for signs of DIY “surgery”.

Give your used radio candidates the “shake test”. It’s exactly what it sounds like: Shake the radio and listen carefully for loose parts rattling around inside. Hearing any noise warrants further investigation. 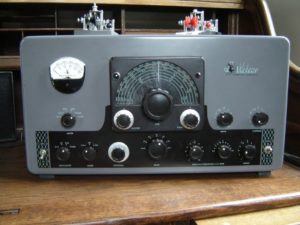 PHOTO COURTESY OF THE ARRL.

Examine the enclosure for extra jacks, switches, drilled holes, or other signs of DIY aftermarket modifications. If possible, open the enclosure and look for components that appear to be added to (or taken away from) the factory circuitry. Some modifications, especially on older Radio Shack scanners, are done internally and there is no outward appearance that anything was messed with. Check for burning, discolored or leaking components, and funny smells.

Back in the 1980s-1990s, a guy named Bill Cheek (now deceased) wrote a wildly popular (and at the time, controversial) series of books on how to hack scanners to operate out of band, boost the audio, increase the scanning speed, add internal surge/lightning protection, and all kinds of cool tricks. I bought his books and modified many scanners for myself and all my friends. His tricks really worked and we had a serious blast.

There are probably many thousands of scanners still out there with Cheek mods on them, and it’s certainly possible the current owners don’t even know it. There are hacks for a lot of other rigs too, not just scanners. If the modifications were well planned and done right, they were effective performance enhancers. At the other end of the scale, you might be stuck with a rig that worked well enough to convince you to buy it but inside it’s a butchered mess.

It’s not always practical to inspect the inside of a used radio, but to the extent that you can, check for obvious modifications and ask questions. Keep in mind that a modification is not necessarily a deal breaker and may even make it more desirable.

Before buying a used radio, ask the owner if they still have the original box, manual, and any other accessories. Actual hardware, like a battery charger, make the radio a more attractive buy because it’s one less thing you have to come up with on your own. Having the original box and manual seldom makes a radio more valuable (and don’t let a seller BS you into thinking it does), but it will tell you something about the owner.

Anyone who bothered to save these non-essential items probably also took pretty good care of the radio. I am not saying a lack of these things means the owner was careless or should be looked at with suspicion; I’m only suggesting that having the extras is a bonus clue that owner is worth taking seriously.

Consider the “hassle vs. dollars” factor.

What a used radio costs should have a lot of influence over how carefully you perform your inspection. You might insist on opening the enclosure and spending time looking for problems in a $500 HF rig, but would you do the same for a $3 weather radio? I wouldn’t. A few summers ago at a swap meet, a big pile of CB radios caught my eye. Before I could even pick up the first one, the seller said I could have everything for $5. Sold! I didn’t bother looking though the box. I handed him a Lincoln and took off with my bounty. Most of what was in there was crap, but buried at the bottom were two beautiful A+ condition Cobra base stations with microphones.

The point I’m making is that yes, you should carefully look over a used radio before you put down any real money. But at the same time, if it does not involve “real money”, then why not take a chance? Don’t dedicate a lot of effort to vetting small time deals.

Ask for a takeback.

So you did your due diligence and found the perfect used radio. As with any used item, there is always a chance something was missed. If you want to buy but still have concerns, ask the seller if they would agree to a trial period where they would take back the rig and refund your money if it does not work out. Most sellers will decline, but some will go for it and it’s worth asking if there is a lot of money involved.

Radios sometimes do not show symptoms of trouble until they have been powered up for a while. Sellers will freely disclose when a radio has not been used in years and they’re not sure what it will do. The phrase, “it worked last time I used it” is often heard in amateur radio circles, even if they will not admit “the last time” was 1983. By the way, a sellers’ refusal of a takeback agreement is not a red flag that they are dishonest. They are thinking about the “hassle vs dollars factor” too and might rather sell the radio for less money to someone else who is not as demanding. It’s ok to ask for a takeback, but don’t read too much into it if they say no.

5 thoughts on “Buying A Used Radio.”