For all the choices, it’s surprisingly hard to find a portable antenna for HF that is affordable and practical. A portable antenna does not have to be an epic quest. In this article I’ll discuss a few options and then give detailed instructions on how to make a super-easy, super-cheap  HF antenna-to-go that really works.

How it came to this.
My last portable antenna was two hamsticks in a dipole configuration (here is a great general overview article about hamstick dipoles, from my buddy over at Prepared Ham). Hamsticks are monobanders, so I had to lug along a separate set of sticks for each band I wanted to use, plus a tripod and mast. A band change involved taking the whole deal down, changing out the sticks, and hauling it back up. Although it worked quite well as an antenna, all that hardware took away from the “portable” aspect of the project.

I then tried some home brew dipoles made with thin 22 gauge wire (which is fine for QRP). They also worked very well and lightened the load, but I still needed an antenna for each band and a tripod/mast to hold it up. There had to be a better way.

Why not just buy a commercially made portable antenna?
There are literally dozens of “plug and play” portable antennas on the market, and the path of least resistance would be to buy one and be done with it. I did consider a manufactured portable antenna until I dug a little deeper and was turned off by the details.

Most of the the portable antenna kits such as Chameleon and Buddipole actually do work fairly well. That’s not the problem. My issue with these antennas is that they use proprietary plugs, cords, and parts that cannot be readily repaired/replaced, or are easy to loose. I could be knocked off the air at a really bad time because some weirdo nonstandard part of my portable antenna is busted or lost.

It does not stop there. An off the shelf portable antenna can be expensive! One particular model really impressed me and had good reviews…but it would cost close to $900 for everything I need to operate 10-40 meters. There was also the “tactical dipole” for $480, and another $211 antenna that consisted of sixty feet of wire and a matching transformer.

Almost $500 for a freakin’ dipole? Seriously? Who buys this stuff?

Making the wish list.
It became clear that to get what I want, it would need to be a DIY project. The criteria was straightforward:

A solution is found.
After digging through numerous antenna books and online resources, I decided on the good old fashioned random wire. It fits all the requirements on my wish list and has an efficiency at least equal to an expensive factory portable antenna.

The random wire antenna has been around as long as radio itself; what I am going to show you here is by no means a brilliant new invention. The basic design is the same as it was 100+ years ago.

The fine print.
A random wire is a compromise portable antenna. In exchange for simplicity and low cost you give up operational space, meaning, the antenna is small and lightweight for storage but when deployed it will take up a lot of linear feet. You will need an open area large enough for the entire run of the wire. Also, an antenna tuner is required.

A tripod/mast is not required if there is a tree or other structure to support the antenna. Positioning the random wire portable antenna may be challenging depending on what is available to hold it up.

In my setup, I have two tripods to hold up each end plus a slotted PVC pipe to support the droop in the middle. When I can get away with it, I leave that stuff behind and just string the wire up in a tree.

If you will be using your random wire portable antenna at a known bugout location, campsite, summer property, etc., it would be worth your while to scout out an installation spot ahead of time.

When using high power (100 watts or so), the exposed metal on the radio and connected equipment may have RF “hot spots”. This is normal. Hot spots are very uncomfortable to the touch but are usually not a serious safety hazard at the standard 100 watt power level. Hot spots can be mitigated somewhat by a good ground and/or counterpoise.

If you are operating QRP (low power), then hot spots should not be an issue.

Should random wires really be random?
There is disagreement over how long a random wire should be. Some sources claim that certain specific lengths should be avoided due to resonance issues. But if a wire is cut to be a certain size, or to avoid a certain size, then it’s not really “random”, is it?

I believe the data is inconclusive. The only criteria I suggest is that your random wire should be at least 50 feet or greater than ½ wavelength at the lowest frequency you plan to use. The goal is to get enough copper in the air to send and receive a decent signal. My portable antenna is somewhere around 75 feet (I don’t know exactly) and works great from 40 to 10.

Parts & materials list.
There are three versions of the random wire antenna. You may not need all these items depending on what version you are making.

14-16 gauge stranded wire (minimum 50 feet or ½ wavelength at the lowest frequency you will use), plus extra for a counterpoise. If you will be running QRP only, you can use wire as small as 22 gauge.

Details about the parts & materials.
Stranded wire is strongly recommended. There is nothing functionally wrong with solid wire, but it is stiff and hard to work with. You’ll be sorry when you want to pack it for transport.

An antenna tuner is required for all versions of the long wire antenna. If your radio has a built in antenna tuner, it’s possible that it will be unable to load up a random wire.

Basic external antenna tuners available for well under $100. The MFJ 16010 is specifically designed for random wire use and they offer a QRP-specific antenna tuner too. I personally use an LDG Z-817. It costs a little more but it is fully automatic through the accessory port on my FT-817. I push one button and within seconds I have a perfect match to the antenna.

A unun is a matching transformer used to convert the unbalanced impedance of the long wire close to something the antenna tuner can work with. It is not the same as a balun (more about this in a moment) .

Putting it together.
Version 1 of the random wire portable antenna (below) is the easiest and cheapest, but it’s also the least effective and the most likely to create “hot spots”. Using the male banana plug, terminate the wire into the center contact on the output SO-259 of the antenna tuner. That’s right…there is no coax, the antenna feeds directly into the antenna tuner. Then, connect the ground lug of the tuner to your ground rod.

All you need to do now it load up your wire and go. The reason this antenna is inefficient and not recommended is because there is no RF ground or counterpoise. The earth ground is not an effective ground for transmission purposes, so you literally have only half of an antenna. This antenna should be your last choice of the three options presented here. 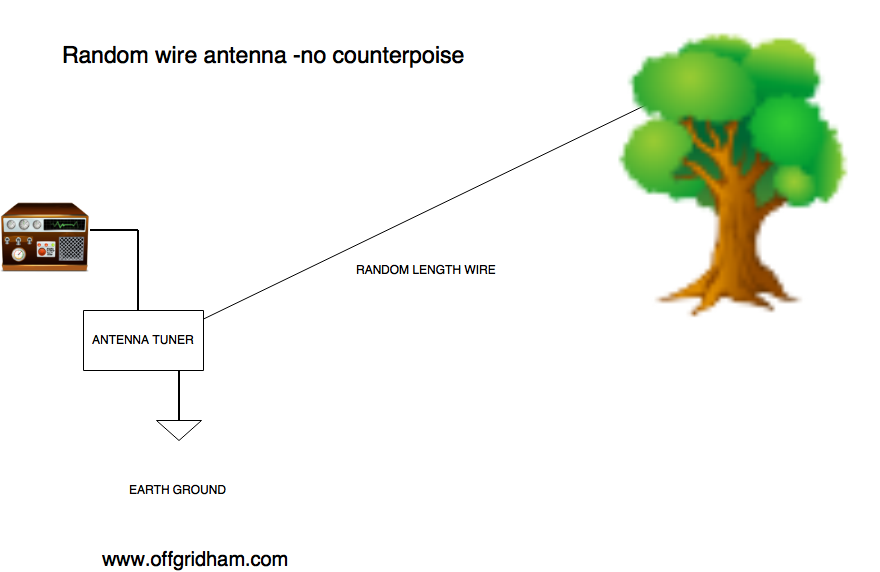 The second version of the random wire portable antenna (below) is the same as version 1, except the earth ground is replaced by a counterpoise. The counterpoise simply lays on the ground underneath the antenna and is also a random length. It does not have to be the exact same size as the antenna, although it helps if it is. 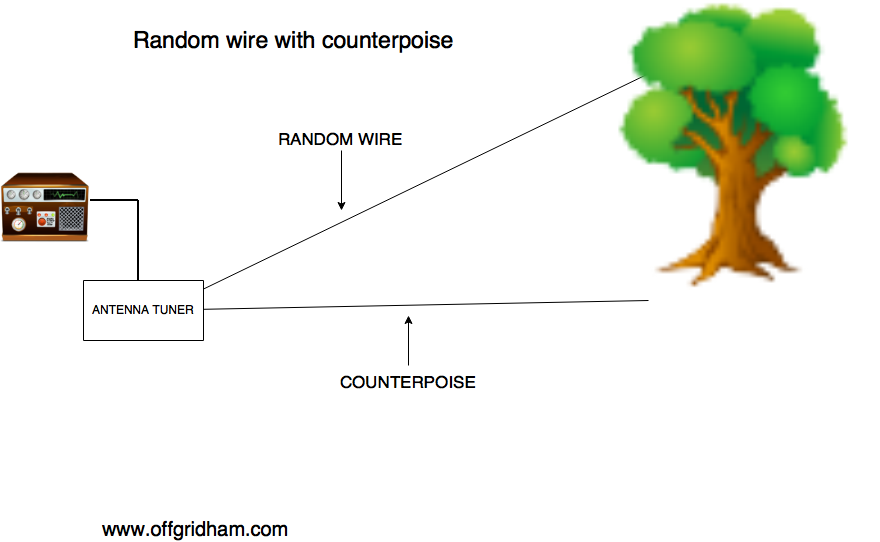 The third and last version of the long wire portable antenna uses a unun so that you can connect the antenna to the tuner with coax. This is especially helpful when it is not convenient to have the radio located near the antenna. The counterpoise connects to the ground side of the unun and lays on the ground parallel to the antenna wire, just as in version 2.

This is the antenna I use the most and it works great. My counterpoise is about 50 feet (for an approximately 75 foot antenna) and I can reliably work domestic DX and occasionally foreign DX with only five watts output from my FT-817 radio. 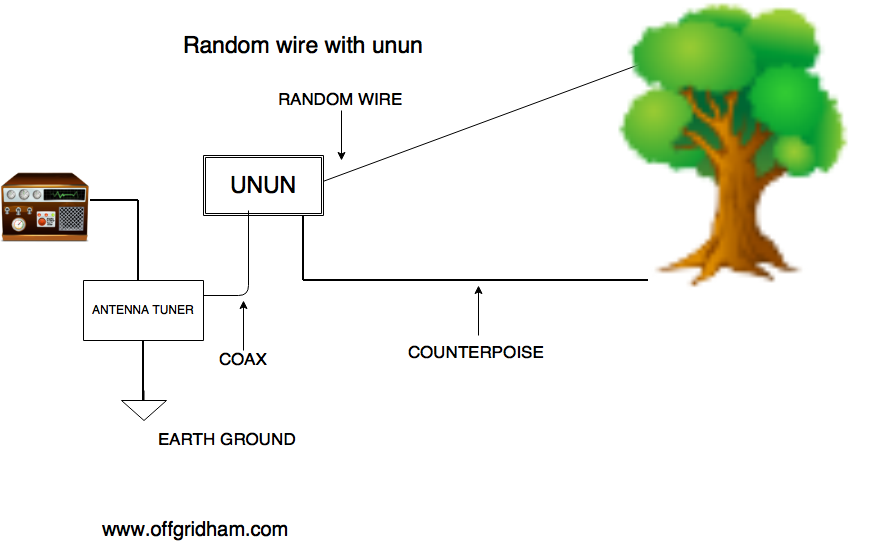 A unun is a simple transformer (photo 4) that matches an UNbalanced antenna to an UNbalanced feed line. This is not the same as a balun, which matches a BALanced antenna to an UNbalanced feed line. Digging into the particulars of ununs and baluns is more than we need to deal with right now; this topic will be covered in a future Off Grid Ham article. Suffice it to say that you need a unun to match a random wire antenna to a run of coax. Ununs are not expensive, and there are lots of plans out there if you want to make your own. 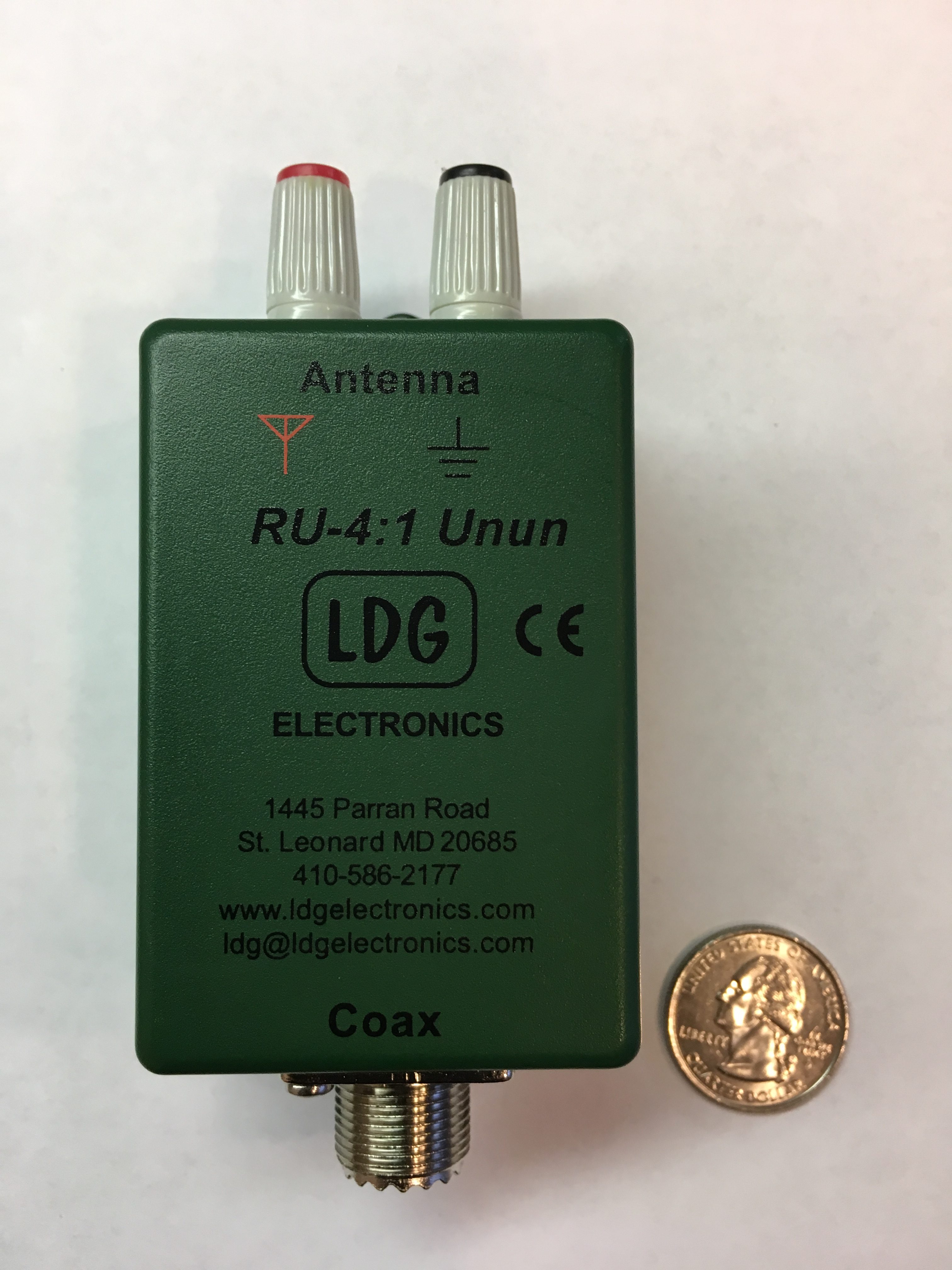 Going on a power trip.
Think about this: Running full power (100+ watts) in a portable application means you will also need a way to produce the power: A generator, lots of batteries, large solar panels, or whatever. If you’re going to drag all that stuff along, then you may as well bring a full size “real” antenna too. Why have all that power just to compromise on the antenna?

To put it another way, a lightweight portable antenna is kind of pointless if all your other gear is clunky and heavy and hard to haul around. One of the reasons I like QRP is that the equipment is a fraction of the size and weight of full power radios with only minor givebacks in communications ability.

Of course, you can push full power into the random wire portable antenna as long as you operate within the limits of your tuner and unun (and watch out for those hot spots!). Although Off Grid Ham is a strong advocate of QRP, I’m not here to talk anyone out of running however many watts they want. I’m only suggesting that radio amateurs carefully think through their priorities and decide if it’s worth the significant weight and space just to have a lot of watts.

What you need to know.
Few radio amateurs have only one radio, and so it is with antennas too. The random wire with a unun is my favorite, but I still use the hamsticks and wire dipoles in some situations because they offer better performance.

The random wire with counterpoise (version 2) is a great option for backpacking/camping because it eliminates the need to bring a roll of coax but still gives good performance. The basic random wire (version 1, no counterpoise) is an “only if you must” choice. Commercially made portable antennas do work if you can afford them. Keep in mind that all portable antennas come with compromises.

Regardless of what type of portable antenna you ultimately settle on, you’ll still want to have a random wire in your inventory. The flexibility and low cost make it an easy option. In an emergency, that simple wire may be your only link to the outside world.