Solar panels greater than 20 watts or so generally cannot be directly connected to a load because the voltages they produce are not compatible with most batteries and equipment: A “12 volt” panel can go as high as 17-19 volts in bright sunlight. And an obvious problem exists when you have a 24 or 48 volt solar array and a 12 volt load. A proper solar charge controller will take care of all these issues.

Why can’t they just make solar panels that produce the correct 12 volts? The nature of solar panels are that output can change quite a bit according to light levels, temperature, and many other factors. With current technology there is no such thing as a solar panel that will produce a stable voltage at all times, under all conditions. To get around this problem, solar panels are designed with a lot of extra wiggle room to allow for poor operating environments. Just as it would not be practical to have a car with the engine connected directly to the wheels, solar panels need a go-between to smooth everything out. The solar charge controller is to your off grid power system what the transmission is to your car.

Pulse Width Modulation (PWM) is the most common, least expensive, and easiest to deploy solar charge controller technology. Often incorrectly referred to as DC to DC converters, they are really switches similar to a switching power supply that match the source voltage (solar panel output) to the load voltage (usually a 12 volt battery).

PWM is relatively simple and has been around for decades. One disadvantage is that under most conditions a PWM solar charge controller will not take advantage of the full capacity of the panels. Ohm’s Law states that current is inversely proportional to voltage. Yet, a PWM solar controller will not do anything with current. When the high voltage from the panel is converted down to a useable 12 volt form, the current out will always be equal to or lesser than current in. This results in an unavoidable net loss of power. Here is an example of this idea from my own home solar power system:

However, 17.7 volts is not useful to the amateur radio operator. The voltage needs to be converted down to approximately 13.5 volts to support a 12 volt battery and run amateur radio gear. Keep in mind that on a PWM solar controller, the output current will never exceed the input current:

In our real world example above, a standard PWM charge controller will give up over 30 watts of otherwise useable power. That is an immediate 24% loss before any other factors are included.

The chart below for a 12 volt system shows the main disadvantage of PWM devices. Notice that the maximum power point (MPP) of the panel is well outside the voltage range of the controller and is too high for amateur radio use. The strip of space between the left edge of the greyed area and the vertical dashed line represents throwaway power. 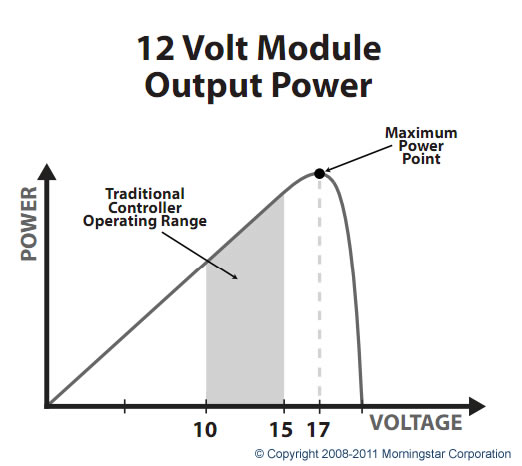 Even though a PWM solar charge controller will have an inherent inefficiency, they are very affordable and by far the most popular choice for amateur radio operators. Their simplicity and price make the energy tradeoff an acceptable compromise.

So if a solar panel’s MPP is at a voltage that is not useful, and we don’t want to give up wattage as the consequence of pulling voltage down, what are the options? What if there was a way to “move” the MPP down into the working range of the system? Since we are bound by a fixed voltage of around 12-14 volts, the only way to slide the power point down is to raise the current up (Ohm’s Law). MPPT is the solution.

Maximum Power Point Tracking (MPPT) solar controllers are more than just a passive switching circuit regulating a voltage output. MPPT devices have on board computers controlling a complex system of semiconductors and gates that convert solar-produced DC to high frequency AC and then back to DC. As the sunlight changes, the MPP is constantly changing; the microprocessor does the math and adjusts in real time. MPPT solar controllers typically pass on to the load over 90% of the incoming energy. In an MPPT solar controller it is possible and even desirable for the output current to be much higher than the input current.

If you want to set your solar panels up in a 24 or 48 volt configuration (the excellent reasons why you would do this will be addressed in a future Off Grid Ham article) but still need 12 volts for your ham station, the MPPT solar controller is the answer to your prayers. Most MPPT units can make the conversion with very little power loss. This makes MPPT far more scalable than PWM. This chart shows how MPPT works versus PWM on a 24 volt system:

Example: The Morningstar Tri-Star 45 MPPT solar charge controller can handle 45 amps. At 12 volts, that’s a maximum of only about 540 watts. However, if we reconfigure our panels for 24 volts, we immediately double the capacity of the controller to over 1000 watts. Remember that current is inversely proportional to voltage, so if the voltage doubles, the current is cut in half. This is one way MPPT gets the most out of your panels.

By reconfiguring the solar panels for 48 volts, the current is cut by another half and the capacity approaches 2400 watts, the maximum the solar charge controller can handle. This whole time the output to the batteries is the same 12 volts that hams need. You cannot do this with a PWM solar charge controller. PWM has fixed voltage and current values. Once the limits are reached, you are done.

MPPT does have its share of drawbacks. First, the expense. An MPPT solar controller will cost double or more than its comparable PWM version. If your solar panel capacity is less than 350 watts and you don’t foresee expanding, you will not get enough out of an MPPT solar controller to make it worth the money. It would be more cost effective to go with PWM and use a larger (or additional) panel to compensate for the power loss.

MPPT controllers are also typically less mechanically robust than PWM models. They are, after all, computers with circuit boards and tiny surface mount components. They are meant to be mounted in an indoor stationary location with some degree of climate control. I recommend against using an MPPT solar controller in a motorhome/trailer, boat, or any environment where vibration, heat, or humidity might be an issue. The technical complexity that makes MPPT efficient and flexible is also a point of failure. PWM controllers aren’t as fussy. Many of them have the internal circuitry encased in epoxy resin; to physically break them would almost require willful abuse.

What You Need To Know -Key Points:

Maximum Power Point (MPP): The maximum voltage and current that can be produced by a solar panel under any given conditions. On a graph, this would be where the x axis (voltage) and y axis (current or wattage) intersect. MPP can change constantly according to environmental factors such as sunlight and temperature.

Maximum Power Point Tracking (MPPT): An active controller technology that uses algorithms to compute the MPP of a solar panel at any given instant and through software drive a series of switches and gates to maintain the MPP within a defined voltage range even as the input varies.

I have PWM and MPPT solar charge controllers and both formats are excellent performers when used within their intended design parameters. There is no clear good or bad option, just a series of choices and trade offs.

20 thoughts on “What You Need To Know: PWM and MPPT Solar Charge Controller.”