It’s been a while.

It’s been quite a while since I did an inverter article. Inverters have not changed a lot since then, but there’s still some new material to go over. It’s also a good opportunity to review older concepts.

Most hams know what inverters do but don’t know any details about them. Briefly, there are three types of inverters: Square wave, modified sine wave, and sine wave. There are significant differences between them.

Square wave inverters are the simplest. A series of transistors switch DC current between positive and negative to approximate a 60 Hz AC signal. The output is pulsing DC, not actual AC. As you can guess, this can cause problems for equipment, particularly electric motors.

Modified sine wave inverters use the DC input to generate a “stepped” output that roughly follows a traditional AC waveform. The term “modified sine wave” is descriptive but somewhat inaccurate since they do not produce a true mathematical sine.  It is still just a form of pulsing DC. These inverters are acceptable for most applications. They are less likely to cause the problems square wave versions are known for.

Sine wave or “pure sine wave” inverters are the only devices capable of creating  true 60 cycle power. This is done through a series of oscillators. Better quality sine wave inverters also have microcomputer-controlled voltage regulation and circuits that maintain a clean 60 Hz output while under heavy current loads.

What is sine and why does it matter? inverters

I promise I won’t go deep into math or spew out complex equations here. Frankly, I’m a long way away from technical college and I wasn’t particularly good at it even back then. However, knowing the basic concept of the trigonometric sine function will help the off grid amateur better understand their inverters and and how it effects their equipment.

Sine exists in triangles. It is a ratio of the length opposite the subject angle to the length of the longest side (or hypotenuse) of the triangle. When the angle is constantly changing, such as in an AC circuit, the sine function can be plotted on a periodic graph that will produce the familiar sine wave. In this case, the period (or time for one cycle) is 1/60th of a second.

As you can see from the animation below, the rotation of a finite line around a fixed point (in other words, a circle) is directly proportional to the periodic sine. Now, apply this concept to an electric motor. When the sine wave is replaced with a square wave or a modified square wave, the 360 degree cycle is corrupted. The motor will not run properly and could even be damaged. If you are using a linear power supply, be aware that transformers also depend on the same 360 degree cycle and will similarly not run as well as they would on true 60 Hz power. Switching power supplies do not have transformers and are not as heavily dependent on sine function.

This admittedly is a very basic definition of the trigonometric sine function. If any Off Grid Ham reader is a math whiz and would like to write a guest article explaining these concepts in plain language, please reach out and we’ll set something up.

Square wave inverters are the least desirable of the bunch. Electric motors do not like them because motors depend on a 360 degree sine cycle to run properly. When operated with square wave power, which as we already know is really just pulsing DC, motors are prone to overheating and reduced capacity.

Square wave inverters are considered obsolete technology. I could not find any new units for sale, but there may be a lot of them on the used market. There is almost no good reason to choose a square wave inverter. If you are considering a used inverter and cannot determine the type of output, pass on it unless you can verify the output with an oscilloscope. Do not rely on the word of the seller because they may not even know what they have. 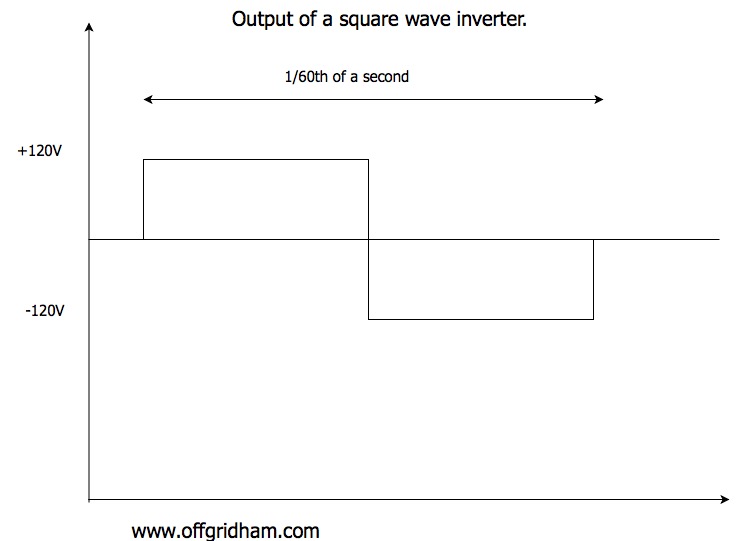 Modified square (sine) wave inverters are the most popular; you can find them for sale all over the place. Switching power supplies tolerate them well. Electric motors and linear power supplies will probably tolerate them well depending on the situation. Modified square wave inverters are a good balance between price and performance, so if you’re on a budget and/or don’t need a high end inverter, these units are for you.

Pure sine wave inverters are of course the most desirable. All devices including electric motors and linear power supplies will run normally. The difference in price between them and the modified square waves has tightened in the last few years. If you are looking at MSW inverters due to budget concerns, consider that a pure sine wave is typically only a few dollars more.

As always, beware of cheap junk.

The internet is overflowing with inverters for sale at prices that seem too good to be true. We’ve covered this before many times but it never seems to fully sink in, so let’s go over it again. Don’t buy cheap off brand junk. It is seldom worth it.

Regular readers know there are only two situations when buying cheap gear is Off Grid Ham approved. One, when you just want to dabble & experiment without making a big commitment. Two, when you need the equipment for a non-essential occasional or single-use purpose, such as a kids’ science project or to use once a year on Field Day. If you do not fit into one of the criteria above, then it’s assumed you need an inverter for mission-critical applications.

Life-supporting medical devices deserve special mention. Heck, I could do an entire article on this alone. I am astonished at how many people are using $29.00 discount store inverters as backup power for their CPAP machines, cardiac telemetry, renal dialysis, oxygen generators, etc. Cut corners somewhere else; this is not the moment to be a cheap bastard. If you need off grid power for medical purposes then shop as if your life depended on it, because it does.

So what is a “good” inverter?  I personally use only ExcelTech and Samlex pure sine wave inverters. ExcelTech is the “Rolls Royce” of inverters and has a price tag to match, but you truly will not find a better, more reliable unit anywhere. These superlative inverters are made in USA and built to last decades. They are often used in government and military installations.

Samlex is not on the level of ExcelTech, but it’s a very solid, reliable, well made inverter with a clean & stable output. They are at a price point that’s within reach of most off grid hams. If you can’t afford an ExcelTech, then get a Samlex. Samlex makes both modified and pure sine wave inverters, so pay attention to what you are buying.

These Off Grid Ham articles from 2016 go into a lot of technical detail about inverters:

Would you like to see an article about off grid power for medical devices? It’s not really within the realm of amateur radio, but if there is enough interest, I’ll do it. Leave a comment below or reach out through the contact page.