One of the hardest problems to understand.

Amateur radio is full of difficult challenges, but few of them approach the hair-pulling level of radio frequency interference, or RFI. It’s a hard issue to address because there are so many variables. For example, sometimes moving a piece of equipment just a few inches will eliminate (or worsen) the problem. Or maybe rearranging a coax cable changes things dramatically. RFI is a two-step problem: First you have to identify the source, and second, you have to resolve the interference.

Successful RFI resolution requires some preliminary homework. Is the problem only on one band, or maybe when a certain piece of equipment is in use? Does the RFI show up only during certain times of day? Unless you already know the source of the RFI, it will take some trial and error to figure out the origin.

It could be a solar controller, inverter, or power supply. The RFI might not even be in your own house. A power company transformer could be the culprit. In any case, you have to know the characteristics of the RFI before you can fix it.

There is a lot of trial and error involved. One time I made an RFI problem disappear by plugging an electric motor into an outlet that was not on the same circuit as the radio. I was just guessing but it worked. It really was that simple. Sometimes you get lucky, and sometimes you struggle and go nowhere.

Common sources of RFI to off grid amateurs include but are not limited to:

Be honest. How bad is the problem?

In my experience, hams have a tendency to treat every case of RFI as if it was a disaster for radio communications. Step back and make an objective evaluation. For example, suppose the interference is caused by an appliance that is used only a few minutes a day. How much effort is that worth? Be realistic about how serious the trouble is. Don’t feel like every random buzz, pop, and hum in your receiver is a mountain to be conquered. Some problems don’t need to be solved.

So you’ve identified the source of the RFI and decided that it’s serious enough to warrant mitigation. Now what? Start with the easy stuff first. Is it possible to put some space between the interference and the radio? Space is usually the most effective solution. Most ambient RFI does not radiate out that far. It may be as simple as moving equipment around.

If that does not work, then look carefully at your installations. Are all the bonds and grounds correct? Did you identify and eliminate any ground loops? A ground loop occurs when the connections between two pieces of equipment allow current to travel in a circular pattern. Also, be aware that bonding and grounding are not the same thing. 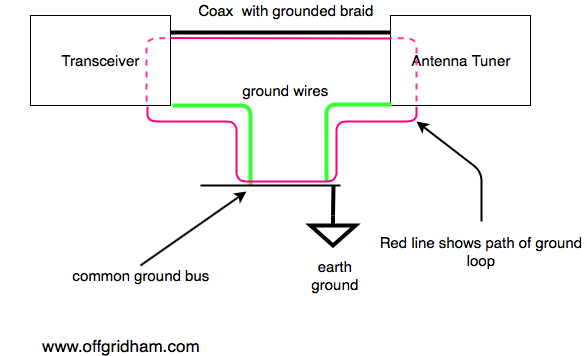 Bonding is when two devices are physically connected together so they both have the same charge or potential. Grounding is when a device is connected to earth ground. Many interference problems are attributable to incorrect grounding or bonding.

Next, check your power connections, both AC and DC. A loose connection can arc. This is not only an unsafe condition, it also can generate a lot of stray RF. The earliest radio transmitters were a “spark gap” design. It’s exactly what it sounds like. A very high voltage would arc through the air between two conductors. The resultant RF would be routed to an antenna and that would be the signal. Spark gap transmitters were for the most part effective as far as communication goes, but would splatter noise all over the band. This wasn’t such a big deal in the days when receivers weren’t that good and there weren’t many of them anyway. Today, such a transmitter would be totally illegal as they are just massive noise generators.

A few weeks ago I was running field tests on my portable off grid gear. My Samlex inverter was introducing horrible noise on the 40 meter band. I found this strange because I’ve had this inverter for years and it always ran clean. A quick check revealed that an over looked ground connection was letting the noise in. I secured the ground and the RFI disappeared.

We’re not there yet.

Making sure all your connections are solid with everything properly grounded and bonded is just good technical practice even if you don’t have an RFI problem.

Suppose all the connections in your station are up to standard and everything else checks out, but the noise persists. RFI chokes for your cords are very inexpensive and usually work. At the other end of the price scale, MFJ sells a $240.00 USD “Noise Cancelling Enhancer”. I’ve never used one; it appears to be a glorified notch filter. It seems kind of gimmicky, but the limited information I can find indicates that it’s an effective device. For that kind of money, it had better be! You’d have to be pretty desperate to spend $240.00 to get rid of RFI, and at that price point I would expect miracles.

When you are the source of RFI.

We’ve talked about eliminating interference in your equipment, but what if your equipment is interfering with someone else’s stuff? That’s a whole different bucket of trouble.

Back when CB radio was a fad, RFI problems were common. You might think it would be hard for little 5 watt radios to cause big trouble, but they did, all the time. Most of it was due to the cheap construction of analog electronics of the day. CB radios were not particularly “dirty.” To save on production costs TV’s and stereos had no meaningful built-in RFI protection. If you’re old enough to remember when car alternators would create a whine in the stereo, or when an electric appliance would fuzz out the TV, you understand how easy it was to mud up a signal. Luckily, those days are for the most part behind us.

Today’s hams have it much easier. Interference from amateur radio signals to non-ham devices is rare. Improvements in receivers and digital technology has a lot to do with it. Over-the-air TV broadcasts are also in a digital format, so opportunities to interfere are just not there like they were in the analog days.

If you do get complaints of RFI, there is a very good chance that you’re not at fault. Hams get blamed for everything, right? Still, be diplomatic. In the interest of goodwill, you should help the “victim” resolve the issue anyway. You might even want to give them some RF filter chokes and similar supplies. The small cost is worth it to keep the peace.

This Off Grid Ham article from 2019 discusses bonding, grounding, and ground loops in detail.

Jim Brown, K9YC put together this very, very detailed and thoroughly researched fifty-nine page PDF about RFI. The document was published in 2007, but it is still relevant. It explains RFI far better than I can.

Rick Lapp, KC2FD has this twenty-seven page PDF also describing radio frequency interference and possible solutions. If K9YC’s paper is too deep and geeky for you, this article will explain it more in practical layman’s terms. He also goes into grounding & bonding and ground loops.

8 thoughts on “Getting Out of the RFI Maze”