DC to AC voltage inverters are possibly one of the most misunderstood devices an off grid ham will ever deal with. It does not help that retailers are often less than forthcoming about the specifications and abilities of their products. In this article we will bring some clarity to a tricky topic by going over the different types of AC inverters so radio amateurs can make intelligent and safe choices. A second follow up article will be a how-to about safely installing and connecting your inverter.

All power inverters perform the same basic function: Turn DC voltage into AC voltage. Early on this was done by feeding the DC into an analog push-pull oscillator or similar circuit, which in turn was connected to a step up transformer to produce the higher voltage AC. Today, inverters use digital oscillators on packaged chips, and heavy iron core transformers are unheard of. Modern inverters do not all produce the same kind of AC, and in many cases it’s not really alternating current at all. There are three types of inverters: Square wave, modified square wave, and sine wave.

Square wave inverters are the least expensive, and as you might guess, the least desirable. These are the low priced inverters you see at auto parts and hardware stores. They do not produce true alternating current. Instead, they produce DC that pulses between positive and negative. The oscilloscope display in photo 1 below is the output of a square wave inverter. There is no mathematical slope from one cycle to the next; the voltage just slams back and forth between two extremes. The display in the upper right corner shows a line frequency of 61.5422 Hz, a deviation that isn’t good but still within the window of acceptability. The back and forth pulses are close enough to actual 60 Hz AC that it can be used to operate most devices. 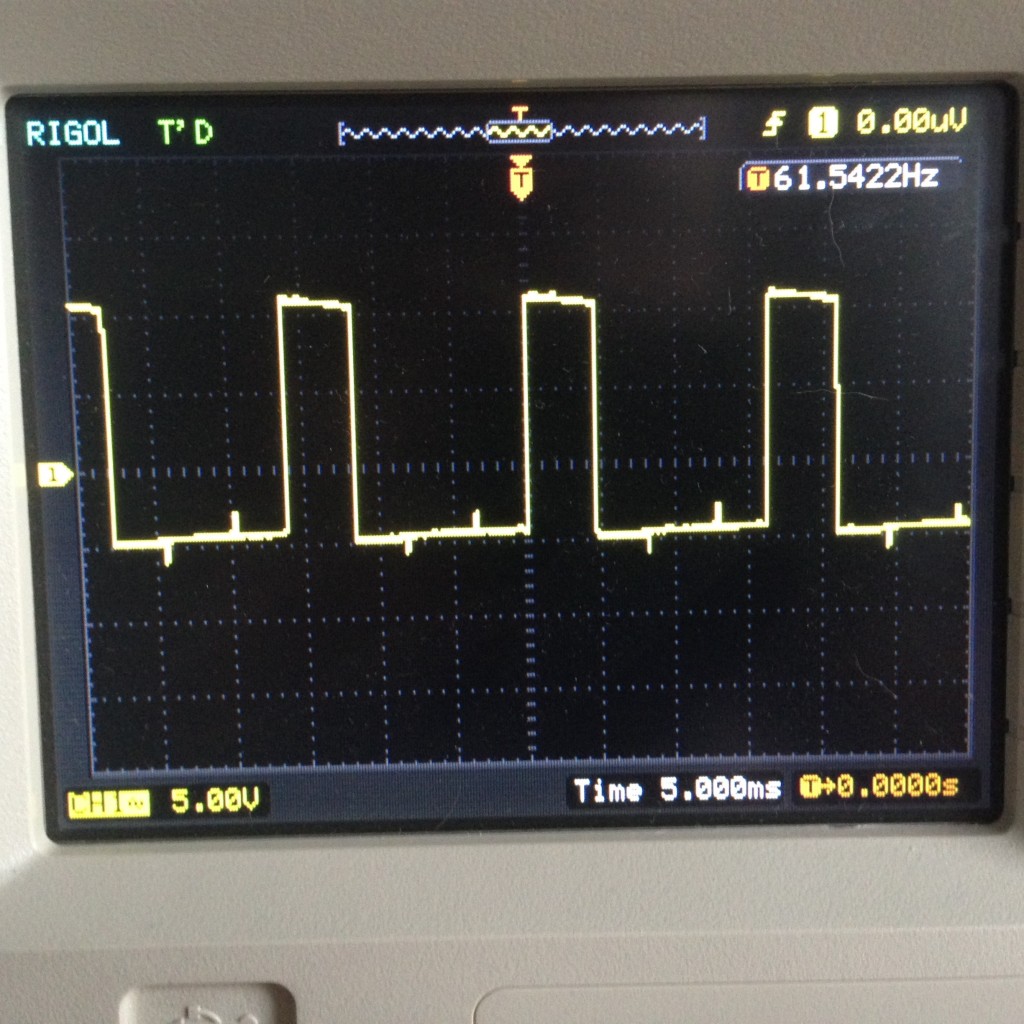 What you need to know: Square wave inverters work best with purely resistive loads such as an incandescent light bulb. It is often suggested that they should not be used on sensitive electronics; keep in mind there is no accepted definition of “sensitive electronics.” Most consumer electronics use power supplies that convert the AC to DC. The power supply acts like an isolator between the device and the not-exactly-AC current. The power supply may not like the square wave AC being fed to to it, but the device itself should not be damaged.

Most electric motors (ie, reactive loads) will grudgingly run on square wave. Expect them to run a little slower, hotter, and make a different noise than usual. Electric motors depend on the 360 degree sine cycle to operate properly, and when it isn’t there, will not run the way they should. Some motors will not run at all.

In general, square wave inverters will work on most devices, to a degree. The power they produce is less efficient than true AC and will shorten the service life of nearly anything plugged into it. Don’t take that as a dire warning. The damage occurs over time so occasional use is not particularly risky. You do not want square wave inverters as a permanent or long term power source.

Square wave inverters with line conditioners and filters:
Many radio amateurs use power strips with integral filters and conditioners to protect their equipment from power spikes and hash on the commercial AC lines. For starters, when you are off grid there are no commercial AC lines for power spikes to enter through, and it’s very unlikely any will be generated within your system. Second, a line conditioner is not going to make square wave AC any more palatable to your equipment, and could possibly make things worse because it will keep trying to “fix” a square waveform that it perceives as an electrical impurity.

Photo 2 below is the output of the same square wave inverter used in photo 1, except this time it’s through a common off the shelf AC line conditioner/filter/surge protector. Notice that two blips of inconsequential electrical hash at the bottom of each cycle in photo 1 are now two very significant voltage spikes (the scope probe is set to x10 attenuation) . A device that is supposed to protect equipment from spikes is actually making them worse! Even more disturbing, look at the frequency count in the upper right corner of the oscilloscope display. The voltage spikes are large enough to be interpreted as extra cycles, effectively doubling the usual 60 Hz to 123 Hz. One caveat: My non-conclusive test results were from one type of line conditioner and it’s possible that other models will not so profoundly mess up square wave AC. Finally, to bring an element of common sense into this, anyone who is that concerned about the integrity of their AC power should not be using square wave inverters in the first place. 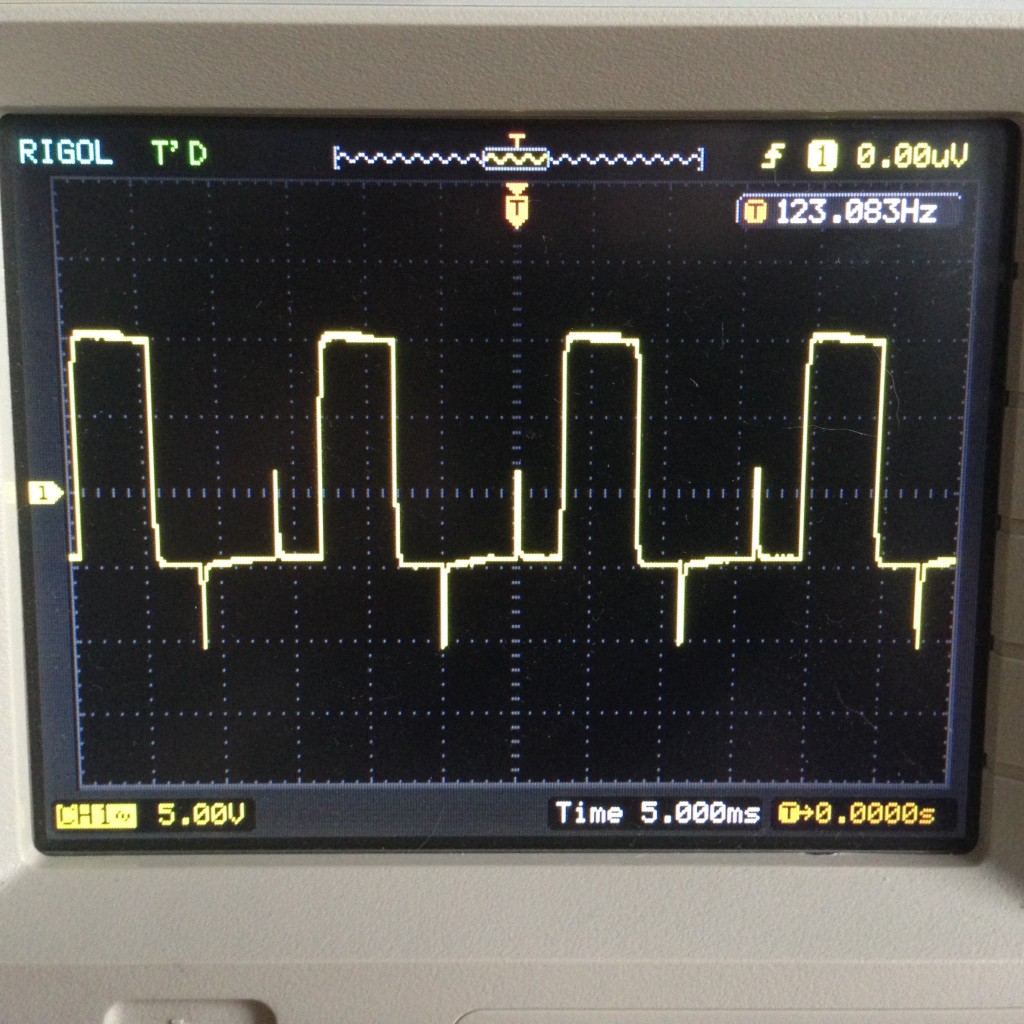 What you need to know: MSW inverters can often be found on sale for the same price as their square wave counterparts. How compatible they are with equipment involves some trial and error, but expect noticeable improvement over square wave. Keep in mind that you are still using a version of pulsating DC, so reactive loads may not operate normally. As before, the use of line conditioners/filters is not recommended. MSW inverters offer a good cost vs. performance balance and many hams use them without a problem. 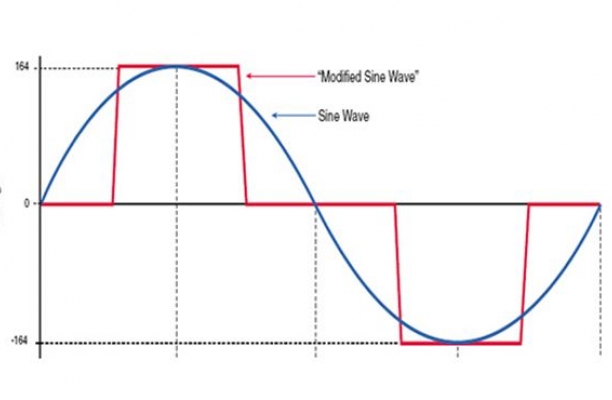 Sine wave inverters, also marketed as pure or true sine wave inverters, are at the top of the inverter pyramid and of course have a price tag to match. They will produce an exact (often better) replica of what the power company sends to the outlets in your house and will not cause problems for reactive loads or “sensitive” electronics.

What you need to know: There is little to talk about here. Sine wave inverters are the best albeit most costly option for the off grid ham. They are totally worth the money. In my less experienced years I’ve owned a few of the low end square wave inverters; today all of them are in in storage as “desperation spares” or barter/trade items for when shit hits the fan (SHTF). As the maxim says: Buy once, cry once. I now use pure sine wave inverters exclusively. There is anecdotal evidence that sine wave inverters introduce noise into amateur equipment via their oscillators, but it’s never happened to me or anyone I know. Sine wave inverters are themselves a form of “line conditioner.”  The use of a separate conditioner/surge protector will not negatively effect the output, but it has no meaningful benefit, either.

Photo 3 below is the output of the Exceltech XP1100 sine wave inverter I use every day in my off grid system. The waveform is laboratory grade perfect, with a frequency of 59.9844 Hz (upper right in photo), which is only a 0.016 Hz (0.0003%) deviation from the 60 Hz standard. This is flawless AC that’s better than what comes from the power company. That’s what the extra money buys. 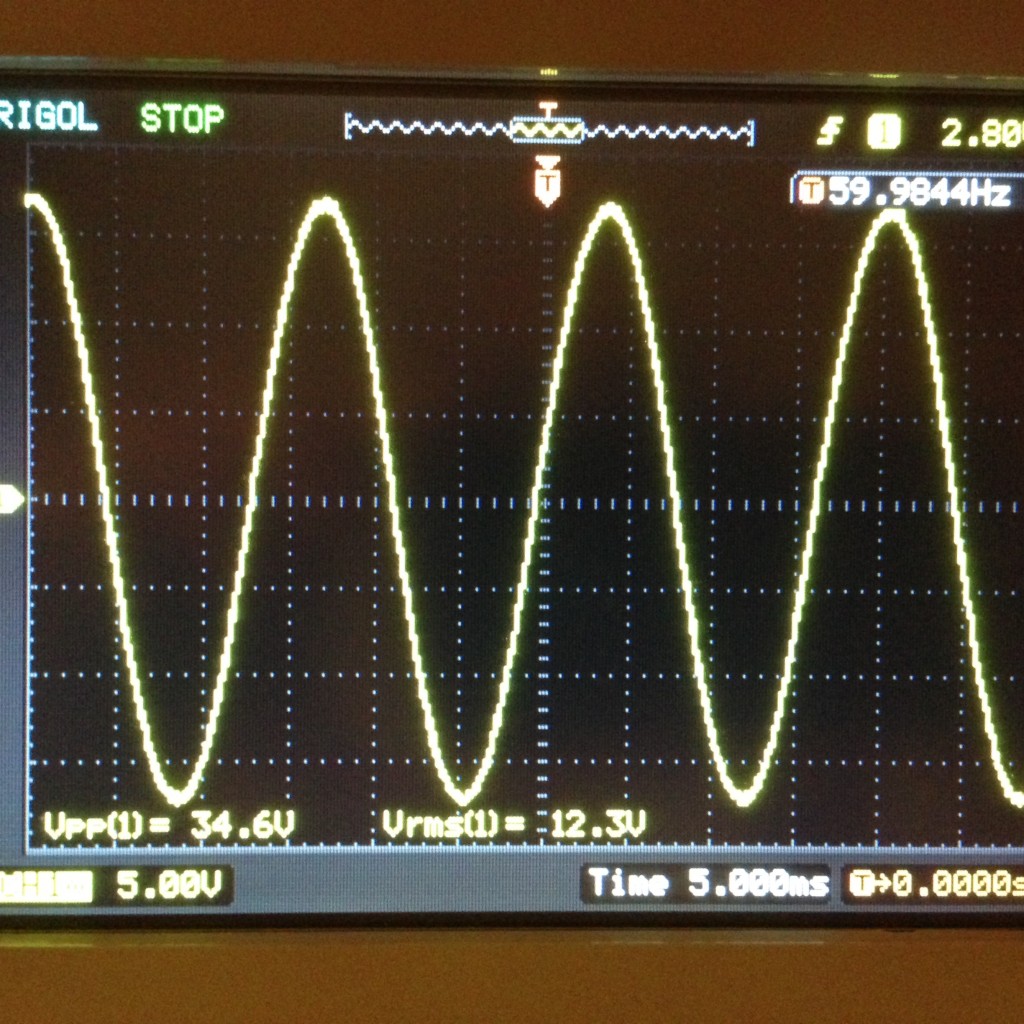 PHOTO 3. THIS IS WHAT THE OUTPUT OF A QUALITY SINE WAVE INVERTER SHOULD LOOK LIKE. PROBE SET TO 10X ATTENUATION. OFF GRID HAM ORIGINAL PHOTO © 2016

Battery-inverter-load relationship.
Ohm’s Law states that current is inversely proportional to voltage, and this relationship presents unique challenges when using inverters. Since the 120 volt AC inverter output is ten times greater than the 12 volt DC input, the current will have a similar inverse ratio.

In rough numbers, this means that every amp at 120 volts AC will require 10 amps from the 12 volt DC source. This adds up to a lot of amps! For example, a household appliance that draws just 2 amps at 120 volts is going to pull 20 amps from the DC source through the inverter. The off grid ham will have to plan for the reality that even lightly loaded inverters require a substantial battery bank or other DC power source capable of delivering high current at low voltage.

Using square wave & modified square wave with amateur radio equipment.
In addition to difficulty with reactive loads, square wave and modified square wave inverters have the potential to introduce harmonics into your ham gear which can cause all kinds of things to happen, such as noise in the audio (both transmit and receive) and distortions on the radio’s screens and displays. It is easier and more efficient to avoid the inverter altogether and run your equipment directly from the 12 volt source. To again call up some common sense, there is no point in changing 12 volts DC to 120 volts AC with an inverter, then change it back through a power supply (a switching power supply is, literally, an inverter in reverse). Use the inverter only on equipment that cannot be powered any other way.

What You Need To Know-Key Points

reactance or reactive load: A form of opposition to electron flow found only in AC circuits where current and voltage are out of phase. For the purposes of using an inverter, this means a current spike with a corresponding large voltage drop when a device is initially turned on, and dependance on the 360 degree sine cycle for the device to operate properly. This cycle is disrupted by square or modified square wave inverters. Common examples of reactive loads are AC electric motors and anything with a transformer or coil.

resistance or resistive load: opposition to electron flow where current and voltage are always in phase; can occur in AC or DC circuits. For the purposes of using an inverter, a device that is purely a resistive load is not effected by square or modified square waves. Common examples of resistive loads are incandescent lightbulbs and simple soldering irons  (not electronically controlled or powered by a transformer).

Due to the substantial power requirements and complexity of inverters, careful planning and energy management is needed to get the most out of them. Now that we’ve gone over the different choices and their pros & cons, in my next article we’ll learn how to properly set up and use inverters.

9 thoughts on “AC Inverters For Off Grid Power, Part 1.”