Many amateurs badly want off grid capabilities, but cite financial concerns as the main barrier. Can off grid amateur radio be done on the cheap? The answer is subjective, depending on how one defines “cheap” and how much power is needed, but in general, yes, it’s doable and I’m going to offer some solutions.

Setting expectations.
I set the budget at $150, which accommodates those with limited funds while still having enough to make something useful. But let’s be real here: This level of cheap means you’re not going to push your 1500 watt linear. In most cases you’re not even going to push your 100 watt HF rig. But you can support several handheld radios, cellphones & small electronics, a QRP radio, and with conservative use, a higher powered VHF/UHF radio. Going cheap comes with hard compromises, but that does not mean you can’t get a lot of bang for the buck, nor does it mean settling for poor quality junk. We will focus on what can be done rather than what can’t.

As always, these suggestions are based on my own observations and experiences. Off Grid Ham does not accept free stuff in exchange for promotional mention, nor do I sell anything. The links are for reference purposes only; you may find better prices elsewhere.

Cheap solar Panels.
This Renogy 100 watt solar panel ($124.00) is one of my favorite things! Very well made and the perfect balance of size vs. power, if you can have only one panel, this is an excellent choice. Adding a charge controller and battery (both required) will put you over our $150.00 goal, but with some creativity you should still be able to keep it reasonably cheap.

This Mercury 27 watt folding solar panel ($109.00) is also a personal favorite. It fits in a backpack and does not require a charge controller. Added bonus: it has USB plugs built in. I use mine as part of my “go box” and it’s very effective. It will power an FT-817 QRP radio and easily have enough juice leftover to charge handheld batteries, cellphones, iPads, etc. Team this panel up with the Portable DC Power Pack and you’ll have excellent –and cheap– off grid capabilities.

GIARIDE offers a 21 watt folding solar panel very similar to the Mercury above. It normally sells for $79.00 (which itself is a very good deal) but as I write this this article it’s on sale for a too-good-to-pass-up $49.00. Do the math: It costs substantially less than the Mercury but you’re only giving up six watts. A lot of bang for the buck in this one.

There actually is a good, cheap generator.
I know Harbor Freight has a well deserved image as low end, throwaway junk, but they do have a few jewels out there. One of them is this little 700 watt gas powered generator. It’s relatively quiet, has acceptable fuel efficiency, and is about as small and lightweight as a practical generator can get. It’s also probably the only off grid power source under $150.00 that can comfortably support a 100 watt radio. The generator normally sells for around $110.00 but I’ve seen them on sale for $80.00. You’re not going to get a million hours runtime from this thing, but it does perform well above its price tag. If there are concerns about AC hash getting into your radio gear, then just use this generator to charge batteries and power your radio from the batteries. There is a way around everything. One caveat: It requires 2 cycle fuel, so make sure you keep some 2 cycle oil in stock. 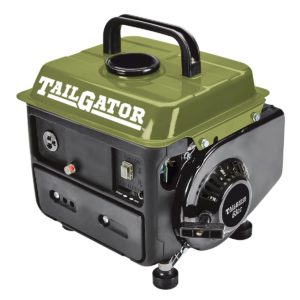 While we are on the subject of generators, there are a lot of good used units to be found at deeply discounted prices. Many homeowners will rush out and buy a generator for an upcoming storm, and as soon as the storm passes and commercial power is restored they want to get rid of the generator. This is really poor foresight, but it creates a favorable buyers’ market. Two major hurricanes recently hit the mainland USA, so in the next few months there will be a glut of barely used generators up for sale. Most of them will have low hours and were recently purchased new. Check Craigslist, eBay, local yard sales, etc. There will likely be plenty to choose from at bargain basement prices.

Charge Controllers.
The internet is loaded with cheap (as in junk) solar charge controllers, some for as little as $10.00. A ten dollar controller may be ok for experimenting or a kids science project, but you probably don’t want to trust one for anything that really matters.

Morningstar has several great controllers that can be trusted. The SunSaver 10 ($50.00) and the SunSaver 10L ($62.00) are 10 amp PWM controllers. The PWM function can be converted to Slow Switching System technology if the PWM generates RF noise (this problem is very rare). The only difference between the 10 and the 10L is that the 10L has a low voltage shutoff feature that will automatically disconnect the load from the battery if the battery voltage drops too low. This used to be a standard feature, but now they’re charging an extra $12.00 for it.

Samlex also makes charge controllers in the 6-10 amp range that are competitively priced with Morningstar. I have not personally tried them, but Samlex is a highly respected brand.

All of these controllers satisfy our cheap, but not cheap junk requirement.

This Off Grid Ham article describes solar charge controllers in more detail, including what PWM technology is and how it works.

PHOTO COURTESY OF THE MORNINGSTAR CORPORATION.

Basically, any solar panel under 20 watts usually does not need a charge controller. In the 20-30 watt range, you may get away without a controller depending on the characteristics of the panel, the load, and how strong the sun is. And over 30 watts, yeah, you definitely need one. The 27 and 21 watt folding panels mentioned previously do not need a controller as they are designed as stand-alone units.

If you are not sure what you are getting into, or just want an abundance of caution, there is a quantifiable method for determining if solar panel will need a controller:

This test assumes a 12 volt system and is a cheap & easy way to tell if a controller is needed. It’s especially useful if you have a panel of unknown wattage, or a used panel that may have lost some of its electrical capacity over the years.

What about batteries?
I’m not going to suggest specific cheap batteries because there are so many on the market and there isn’t a lot of difference between them. AGM (absorbed gas mat), also known as SLA (sealed lead acid) batteries are the least expensive and most common. Lithium batteries are very lightweight and have far more power density than AGM, but they are also extremely expensive and require special chargers. The prices have been coming down recently, but for now if you want it cheap lithium is not an option.

Generally, the “sweet spot” is to have about 1 amp-hour of battery for every watt of solar. This can be a problem in portable applications. You may not want to lug around a 30 amp-hour battery, or even an 18. Make your own call on this one. I use a small 7 amp-hour AGM battery with my 27 watt solar panel and it is more than enough to run my FT-817 and cellphone. The catch with a smaller battery is that you will not have as much reserve power for times of weak or no sun. Ahhh yes…there’s one of those tradeoffs again!

A buffet of stuff! But you do the cooking.
Instead of a detailed explanation on how to make a specific project, this time I’m going to make you all sweat the details yourselves. This list of ideas can be mixed & matched to individual needs and offers a basic framework to build on without a lot of step-by-step handholding. It’s a great way to learn! With $150 and some creativity any modestly skilled amateur should be able to assemble an effective & practical off grid power system.