Inexpensive gas generators are a big favorite in the amateur radio community. Everyone seems to love these effective albeit cheaply made power plants! As they became more popular, the law of averages kicked in and there was an unfortunate but not unexpected increase in accidents and deaths related to small gas generators. In some instances, this might be considered as a wrongful death because it could have been easily prevented. There are loads of attorneys out there for people who experienced a wrongful death, but we are here to try and stop that from happening. In an effort to prevent a tragedy, we’ll be going through gas generator safety. I’ll also show you how to more effectively use your generator.

Have a plan before you need a plan.
Most accidents occur due to haste or lack of planning. Don’t be the mall ninja who just buys stuff and stashes it away. Plan out how you will use your generator and run practice drills as often as needed to make sure your plan will actually work.

Issues that need to be addressed include: Where will the generator be stored, and where will it be used? How easy is it to move from one spot to the other? Do you have the correct length and type of cords to power your equipment and where will these items be kept? How much fuel can you store and how will it be dispensed?

Imagine that it’s the middle of night and the grid goes down during a heavy storm. It’s pouring rain and the basement will quickly flood if you don’t get the generator on line real soon. This is not the time to be running around looking for an extension cord, or digging the generator out from under all the clutter stacked on top of it, or realizing the five gallon fuel tank has about two cups of gunked up old gas in it.

While none of these things are an inherent generator safety hazard, they do incite haste & carelessness, which in turn increases the probability of an accident. No one wants to be running around in a storm trying to solve problems that with some simple forethought could have been avoided in the first place.

So the first step to generator safety is to be prepared. Decide where your generator will be stored. If the storage spot is different than where it will be when running, then consider how easy it is to move between the two places under adverse conditions.

Cables, cords, and other generator supplies should be centrally located and easily accessible. I store mine in a large plastic tote. These items are dedicated to off-grid generator use only and are not “borrowed” for any other purpose. When the need arises, I can grab the tote and be confident that I won’t have to hunt around for anything. I also suggest having a supply of motor oil, a spare spark plug, a spark plug wrench, and an air filter.

Having everything staged and ready to go will eliminate the anxiety that comes from disorganization and reduce the opportunity for an accident. In a grid-down situation you’re going to be plenty stressed without added distractions.

Making the right connections.
The easiest way to use your generator is to simply plug into the outlets on the generator and go. Extension cords are fine as long as they are used within their rated load limits. Stringing two or more extension cords together is not acceptable generator safety practice! 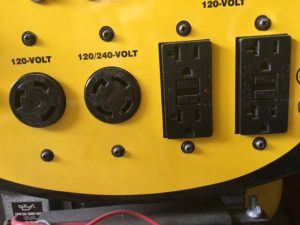 Your generator should have a ground lug somewhere on the frame. It is not necessary to ground your generator unless it is connected to a transfer switch

Transfer switches.
Installing a hard wired transfer switch in your house provides an additional layer of generator safety because it eliminates the need to run extension cords all over the place. The other big benefit transfer switches offer is that all the outlets and devices in your house will work as they normally do. Transfer switches cost from a few hundred dollars for basic manual models up to the thousands for a fully automatic version. Also, factor in the cost of wire & materials beyond the switch itself.

A six-circuit transfer switch. A 240 volt feed is split into two 120 volt branches with three circuits on each. OFF GRID HAM ORIGINAL PHOTO ®2017

Installing a transfer switch often requires a building permit. The rules vary depending on where you live, but in general, a permit is not needed for a transfer switch if it A) is manually operated, and B) will be used on a portable generator that is not permanently connected to an electrical circuit. This is the legal loophole I used to install my transfer switch without getting the government involved.

I did my own switch install, but be warned this kind of project is not for the casual do-it-yourselfer. Transfer switch installation requires advanced skills; if you want to go this route and you’re not completely fluent in home electrical wiring, including working around hot circuits, do yourself a huge favor and hire a pro. Part of generator safety is knowing your limits and not exceeding them.

As always, do not rely solely on internet advice, even if it does come from a credible source such as Off Grid Ham! Do your own due diligence and comply with local codes and/or NEC standards. Never take shortcuts with electricity. The electricity will always win.

Power cables for transfer switches.
A standard extension cord cannot be used to connect a generator to a transfer switch. Expect to spend good money for a correct cord.

Most transfer switches use an L-series NEMA male plug with either three or four prongs, and most larger generators have a corresponding female plug. Shop carefully because there are different types of connectors in use, and you may need a different type of connection on each end. The nomenclature works like this: 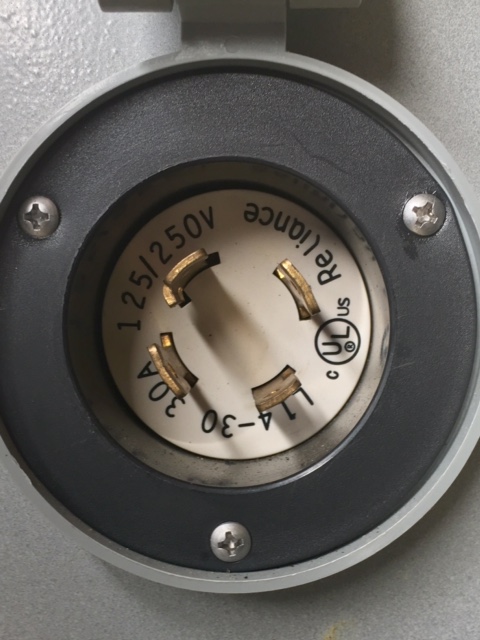 The “Big C”: Carbon monoxide.
According to the Consumer Product Safety Commission, over 80% of non-fire related carbon monoxide (CO) deaths are from the improper use of gas generators. That’s not a typo. Generators alone cause four times more CO fatalities than all other CO hazards combined!

One would think that running the engine in an outdoor, well ventilated area is as instinctive as breathing itself, but as the CPSC statistics show, a lot of people are not listening to their inner voice. Every time there is a large storm that causes widespread power outages, reports of carbon monoxide deaths increase dramatically due to failure to follow this most rudimentary & obvious of generator safety guidelines. The fatalities are 100% preventable.

We will not spend many lengthy paragraphs discussing this because there should be no need to. Use a little sense! Generators should never be operated in attached garages (even with the door open), enclosed porches, crawl spaces, or near open windows, doors, or air intake vents.

Since I know a lot of my readers are going to ignore this generator safety advice, please at least have one or more carbon monoxide detectors in your home so you will have early warning when your lack of instinct catches up with you.

Can you hear me now?
Generators are low priced because the manufacturers cut corners. One of the most obvious shortcuts they take is at the muffler. With only a few exceptions, generators are dangerously LOUD! Hearing protection is inexpensive and very effective, so there is no good reason not to use it when near a running engine. Hearing loss from excessive noise usually occurs incrementally, sometimes over many years, and is irreversible. You may not notice until it is too late.

Many radio amateurs lack awareness of hearing conservation as it relates to generator safety, but the problem is very serious and also easily 100% preventable.

“Clown Cords,” or, things you should never, ever do.
There are two common DIY connection methods that technically work, but are so outrageously hazardous that it’s hard to believe that people actually do this:

Trick #1 ”The Cheater Cable : This is a custom made extension cord with a standard household NEMA 5-15 male plug on both ends. One side plugs in the generator, and the other plugs into any outlet in the house. The power will then be backfed to every outlet in the house connected the same breaker panel.

The danger is one end of the cord will have exposed energized contacts. On top of that, the power from the generator will also backfeed into the main power grid and endanger electrical workers trying to restore service. The hazard to power company employees can be eliminated by shutting off the main breaker, but anyone who would use a “cheater cord” is probably not going to care enough to take that precaution.

Trick #2 “The Jack In The Box”: A custom cord is made with a male plug on one end and bare wires or spring loaded clamps on the other. The cord is plugged into the generator, and the bare ends/clamps are terminated on the main bus in the breaker box. I’ve even heard of people doing this with automotive jumper cables! This trick creates the same problems as #1.

There are a variety of other shortcuts and questionable solutions. If it looks and feels unsafe, it probably is. All of these hacks are extremely dangerous and are among the worst generator safety violations out there. If anyone gets injured or killed from a “clown cord”, the responsible party will for sure be in a world of legal trouble in addition to the emotional trauma of having been the cause of a totally avoidable accident.

If you plan with the right stuff, there will be no need to resort to the wrong stuff!

Key Points-what you need to know.

This Off Grid Ham Article from 2015 gives additional info about generators.

For the truly nerdy, here is a PDF report from the Consumer Product Safety Commission about carbon monoxide fatalities.

Here is a printable info-graphic about generator safety that can be distributed at a ham radio club meeting or hamfest.

Generator safety & use is admittedly not the most exciting topic in the world, but it is important. The rules are not complicated or hard to follow. A power outage elevates the possibility of an accident; the competent off grid ham will have the right equipment, the right frame of mind, and the right plan to get through it without becoming their own safety hazard.

4 thoughts on “Generator Safety: Power Up Without Getting Knocked Out.”