You did your homework, absorbed all the great advice here on Off Grid Ham, and put together an off grid amateur radio setup that works well and serves your needs, at least in theory. What now? To continue with a theme from my last article about Winter Field Day, here’s the part where we move from the theoretical to real-world practical. Ham radio training can come in many forms, so let’s go over the options.

Beware of “mall ninja” syndrome.
In survivalist/prepper vernacular, a mall ninja is a term of ridicule for someone who acquires a high-end, expensive weapon and tons of accessories to go with it, and then thinks by virtue of them being able to afford all that trendy hardware they are a badass “expert”. 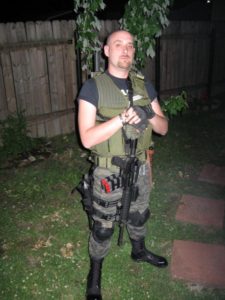 I’m tossing this dude a favor by not including a photo credit.

With a closet full of big-buck gear that they barely know how to use, assuming they use it at all, mall ninjas are all about appearances and making themselves feel good. See also: tacticool.

The concept can also apply to amateur radio. If you have amassed an impressive inventory of radio and off grid power equipment, but seldom if ever actually use the stuff or do any ham radio training, then you’re not a ham radio hobbyist. You’re not a prepper or survivalist. You’re just a collector/mall ninja.

There is a cure.
If you read the preceding and were a little embarrassed to realize “oh wow, he’s talking about me,” don’t worry. This problem can be fixed. And if you are already walking the talk, keep reading because there’s something in this for you, too.

There are several paths to off grid amateur radio proficiency. Ham radio training usually involves participation in organized groups but there are other options If groups are not your “thing”. Either way you’ll come out the other end a better radio amateur. In no particular order, here are my suggested prescriptions for avoiding mall ninja status:

Community Emergency Response Team (CERT): CERT is probably the largest and most well known organization for emergency preparedness. Although technically a federal creation via FEMA, CERT is organized into local teams with a lot of autonomy to set their own priorities and training goals. CERT is not a radio-centric group. Their main purpose is to respond to disasters and emergencies and amateur radio is only a component of that larger goal.

SKYWARN: Also a child of the federal government, SKYWARN is a large operation. Volunteers are trained to identify, track, and report threatening weather conditions. SKYWARN does not perform relief or rescue functions, nor are they “storm chasers”. They are strictly an observe-and-report organization.

SKYWARN is very popular with hams.  As a SKYWARN volunteer you’ll probably meet a lot of other amateurs. From there you can network and make connections that will hopefully open up opportunities that might not otherwise happen.

Amateur Radio Emergency Service (ARES): ARES is run by the ARRL and is not a government entity, although by their nature they work closely with public agencies. It is primarily intended to be a communications network in times of trouble; ARES volunteers do not perform relief or rescue functions although they sometimes take on ancillary duties such as directing motor vehicle traffic. Out of of every group on this list, ARES is probably the best opportunity for ham radio training,. Like CERT, ARES is a national organization but delegates most operational & training decisions to local groups who best know their own specific needs.

Radio Amateur Civilian Emergency Service (RACES): RACES is closely related to ARES. It is less of a traditional organization and more of a list of hams who have identified themselves as available for emergencies. Due to a really weird and archaic rule, RACES nets and on-air drills are limited to only one hour per week unless special permission is granted. RACES is not heavy on ham radio training; you won’t do very much until there is an actual incident.

Military Amateur Radio Service (MARS): Founded in 1925 and peaking in popularity during the cold war years, MARS was originally designed to supplement the military comms system by using hams to pass personal messages to stateside families of service members stationed overseas and assist with military radio traffic as needed. With satellites and the internet now available pretty much everywhere, there is no longer much rationale for radio amateurs to get involved.

The Navy and the Marine Corps dropped out of MARS in 2015. I suspect the other branches will soon pull the plug as well, effectively dirtnapping the MARS program. The relevance of MARS is fading but for the time being it is a viable ham radio training opportunity.

Radio Emergency Associated Communications Teams (REACT): Back in the 1970’s and 80’s when CB radios were the “cellphones” of their day, REACT was peerless among radio-related volunteer service groups. It’s hard to overstate the vast breadth and depth the REACT network had at the time. A motorist or trucker in distress could “break channel 9 for REACT” from literally any inch of highway anywhere in the USA, at any time of the day or night, and get a reply. When CB radio flamed out, so too did most REACT teams. The holdouts who stayed moved to ham radio or other comms modes.

While researching for this article I discovered that the REACT national website had a lot of broken links and incomplete/obsolete data. A REACT representative who contacted me after I posted about these concerns on an internet forum stated that the organization is run entirely by unpaid volunteers, including the folks in charge of the website. They are going through some staffing changes but are aware of the glitches and REACT’s on line presence should improve soon. If you can find a nearby active team you will be offered plenty of ham radio training options and sincere, dedicated citizens trying to make their community a better place. While no longer an omnipresent giant, REACT is still a classy and highly respected organization.

Local ham radio clubs: Joining a local ham radio club is one of the best ways to get to know other amateurs and learn the craft. Clubs can vary quite a bit in enthusiasm and participation, but as a member you’ll have a voice in what direction the club goes. It’s an excellent venue to meet like minded individuals and create your own ham radio training programs. Some clubs focus on SKYWARN or contests or other sub-specialties that may not line up with your priorities, so shop around and find a good fit.

Operational Security (OPSEC) and why it matters.
In simple terms, operational security (OPSEC) is keeping keeping knowledge of your lifestyle, habits, and physical assets private so anyone with ill intent cannot use the information against you.

By joining any group, especially one connected to the government, you out yourself to some degree about your off grid communications capabilities and other personal details. Carefully weigh the information you will give up against the benefits gained from the being part of the group. I do not want to scare anyone away from what could be a great experience, but it’s worth pointing out that OPSEC is always an issue when you raise your hand and volunteer.

What to do if you don’t like any of the previous choices.
Maybe, like me, you’re just not much of club/group/organization person. That’s fine, but you’re not off the hook for getting serious about your ham radio training. Here’s some ideas:

Nets and Contests: Nets and contests allow you to advance your skills without the long term commitment of being in a club or group. You should be able to jump on a net almost any time. Participating in contests requires a little more planning ahead but are very doable even for the busy amateur. In either case, nets and contests are a rich opportunity for ham radio training on your own terms.

Just Do It/Fly Solo: Those who don’t want to get involved with a group or conform to a schedule can simply develop their own ham radio training program and do it on their own. As I have mentioned numerous times on this blog, you don’t need a special occasion to practice your skills. Flying solo requires a lot of self-discipline and motivation because there will not be any organization’s rules & goals to prompt you along.

The JDI/FS option is my personal favorite. I take it upon myself to practice and experiment regularly. Sometimes I hop on a net from my home station. Sometimes I set up my portable HF rig on the back stretch of my property or in a nearby wilderness area. Other times I operate mobile. Occasionally I will take my portable HF radio out into the field and purposely operate during lousy weather just to get myself used to the idea that the need to communicate does not always occur when it’s sunny and nice.

The goal is to keep trying, keep practicing, and learn from mistakes. I’ve gained more wisdom from experimenting on my own than I ever would have in any traditional setting. The Flying Solo track is not for everyone. Some people do better in a structured group environment. Know thyself and act accordingly.

What you need to know.
Sitting around admiring a hoard of nice equipment that rarely gets used may give its owner a warm feeling, but that warm feeling will vaporize fast when reality hits and a lack of ham radio training leads to the unhappy ending that awaits every mall ninja. It does not matter how you practice or with whom. Whether you join a club, or any of the numerous organizations, or wing it on your own, get out there and go for it. Experience and knowledge cannot be purchased and stockpiled on a shelf.