One of the primary concerns of radio amateurs who operate with alternative energy is something I call communications efficiency, or, getting the most signal you can for the input power. A lot of fuss, maybe too much, is spent on squeezing every last watt out of our solar panels, generators, and batteries, but not much thought is put into how well our chosen transmission mode uses that power. Some HF transmission modes are inherently more efficient than others. In particular, the amateur radio data modes deliver a very high “bang for the buck” and that is why off grid hams should learn them and incorporate them into their station operations.

Today we will discuss the rationale for operating amateur radio data modes, the pros and cons as they apply to the off grid ham, and factors to consider before getting started.

Also in the mix is some legal stuff. Per 97.113 of the FCC rules, one cannot transmit “secret codes,” ciphers, or encrypt a transmission with the purpose of obscuring the meaning of the information. Amateur radio data modes are technically “obscured” in the sense that they cannot be decoded without special software. My non-attorney layman’s take on it is that since the protocols & standards used in the amateur radio data modes are very well publicized, and the software needed to decode the data is easily available to anyone, then there is no “purposeful intent” to obscure the meaning of anything.

Why data modes are worth it for the off grid ham.
The typical off grid ham has two concerns that on grid amateurs don’t think much about: 1) Conserving electrical power, and 2) keeping technical complexity to a minimum. Running amateur radio data modes appears to go against both of these goals.

The computer will consume energy that is in limited supply, and the entire data mode setup (computer, interface, software, cables) adds many additional points of failure. This could be a huge problem in a SHTF situation. Survivalists & preppers in particular like to keep things simple and inherently have an elevated risk aversion. There is also the issue of having to lug extra gear along if you are running a portable station.

All these concerns are valid but I believe amateur radio data modes are still worth it because their ability to get a signal out, through poor band conditions, with low transmitter power, more than negates the disadvantages. The extra power for the computer is offset by running QRP. The data modes are so well adapted for low power that it’s an unofficial but widely accepted convention that no more than 25 watts of transmitter power be used. Using more is not illegal, but it’s considered rude, lid behavior.

A laptop computer plus the interface and a radio transmitting QRP draws less combined power than a standard 100 watt HF radio alone, and if the computer crashes or there are other technical difficulties related to sending/receiving data, one can always fall back on SSB or CW. For the off grid ham, what you give up for what you get is a net-plus.

The most common data protocols are: PSK31, RTTY, JT65, MFSK, Olivia, and PACTOR. Of these, PSK31 is by far the most popular and the mode where you’ll find the most activity. RTTY and PACTOR have been around for decades. Back in the day they were dominant on the bands; now they are infrequently used.

Jumping into the pool.
It can seem a bit confusing at first, but only a few elements are needed to operate amateur radio data modes: A radio, a computer, an interface between the radio and computer (which also includes some cabling), and software.

Most hams already own two of these items –the radio and the computer. Pretty much every HF radio made in the last 25 years has a data port that greatly simplifies things. If you have an old tube radio or a radio that does not have a data port, then there is a way to run through the microphone and headphone jacks, but it does not always work. Many of the older rigs have slow relays and audio circuitry that was not designed for data service. Some hams do successfully run data through old radios. That’s beyond what we’re doing here but there are plenty of on line resources for those who want to “go there”.

One important caveat: If you have a CW-only radio, I’m sorry but you’re out of luck as far as amateur radio data modes are concerned. The computer can’t interface with the audio/microphone because CW-only radios have neither.

Interfaces demystified.
As in most things ham radio, it’s all about how much you have to spend and how many extra goodies you want. Basic interfaces start at about $60.00 and go up into the hundreds. West Mountain Radio and SignalLink are the two names that come up most often and account for a majority of the market; I use a SignalLink and get great performance from it.

Some interfaces connect to the microphone and headphone jacks on your computer and others go through a USB port. There is no particular advantage or disadvantage to either method; it’s largely a matter of personal preference. Also, you will probably have to buy the data cable separately from the interface. Have information about your radio’s data port (socket type, number of pins, etc) when you go shopping.

Don’t get too hung up over choosing an interface; they are all basically just glorified sound cards anyway. For the adventurous, there are tons of articles and plans on the internet for DIY versions. 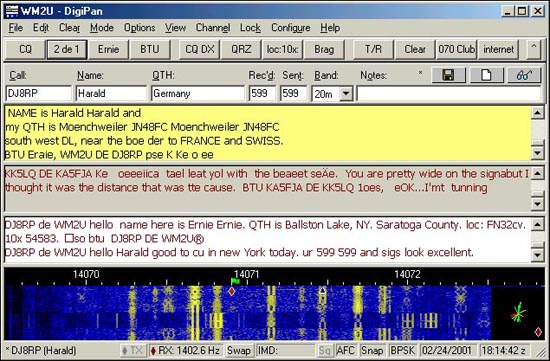 Software Buffet.
Of course amateur radio data modes need some kind of software to make it all happen. The good news is that there are many choices out there, and most of them are free. Fldigi and Digipan are two popular free platforms. Ham Radio Deluxe is not free ($100 after a 30 day free trial), but it does much more than just handle on air data. It can also control your radio, antenna rotator, and automatically log your contacts. I use it myself and it’s an impressive, full-feature suite of software with clean, easy to read graphics. Still, it’s got a significant learning curve and not everyone will want or need that level of functionality.

All of the popular programs for amateur radio data modes have a wealth of on line documentation and discussion forums if you run into trouble. If you’re not sure what software you want, download all of them and try them out. You’ll eventually settle into one you are comfortable with. As with interfaces, this is not a decision you need to agonize over.

Getting everything going.
This is where amateur radio data modes can be a bit frustrating. The biggest beginner’s hurdle is getting all your computer sound card & microphone settings right, as well as your software options and the interface too. Trust me, this can be a rage-inducing experience, but stick with it. The best advice I can give is follow the user manual . Go through the settings step by step and do not skip anything or take shortcuts no matter how much of a computer wizard you think you are. It also helps if you read through the instructions first and familiarize yourself with the process.

One maddening problem I experienced when recently setting up my new computer for amateur radio data modes is that a lot of the documentation is written for older operating systems and was never updated. Most of the screens and settings do not match up with what the manual directs. If this happens, you may have to do some guesswork or dig around online user forums. Free programs are public domain so you won’t get and should not expect professional support. At the other end of the scale, I paid good money for the Ham Radio Deluxe software and was not happy that their documentation is two operating systems behind the times. To be fair, HRD offers free call in and email support for paid users.

Once everything is working, you’ll be exited to see that it really works! I suggest starting off with PSK31 as it is the most popular digital mode. This YouTube video from K4REF is somewhat lengthy but gives a great overview of setting up amateur radio data modes:

Let’s confront the ugly.
Ham Radio Deluxe recently went through a high profile controversy where one single user on an internet forum accused HRD of purposely “hacking” his computer in retaliation for a disagreement he had with the company. As expected, the forum quickly descended into hundreds of “me too!” responses of questionable validity and a lot of pissing back and forth over side issues that had little to do with the original topic.

On the internet, things tend to get amplified beyond far their importance. I was ambivalent about even mentioning this incident out of concerns of calling additional attention to a subject that already got way more exposure than it deserved. I ultimately decided to include the information because this very public altercation is likely to come up in your reading elsewhere anyway, as evidenced in the “comments” section at the end of this article.

Ham Radio Deluxe has without equivocation admitted to the problem, made whole those who were negatively effected, and made appropriate internal changes to prevent it from happening again. It’s also important to note that the “hacking,” if that’s what it can be called, was caused by an individual HRD employee who was acting on his own and not out of any corporate policy or management group decision. This individual is no longer with the organization. In my opinion, HRD is an inherently honest operation that was thrown under the bus by the unethical acts of one person. Enough already! They have satisfactorily made amends and do not deserve to be bashed ad infinitum over this issue.

Click here for the formal statement from Ham Radio Deluxe.

What you need to know.
Getting started in amateur radio data modes requires some expense & effort but once over that hump you’ll find that it’s a useful & fun medium with a very high communications efficiency. I’ve worked more DX with five watts of PSK31 into a simple wire antenna than I ever have or will on full power voice or CW. The technical complexity and power requirements that hold back some survivalists/preppers and off gridders should not be a deal breaker; the payoff is well worth it. And while the digital modes cannot be considered “secure” comms, the fact that most hams don’t have the means to decode the data does offer an informal level of privacy compared to in the open voice transmissions. As always, it’s best to learn these skills well in advance of an urgent need.

(Correction: On 3/31/17 this article was updated to address Ham Radio Deluxe controversy)

8 thoughts on “Getting Started In Amateur Radio Data Modes.”