Considered obscure & expensive technology less than a decade ago, lithium batteries are are all grown up now and can be found in pretty much everything. Even the cheap $29.00 off brand handheld radios come standard with lithium batteries. Often forgotten in the mix is absorbed glass mat (AGM) batteries. They’re very adaptable for off grid use and have a lot of overlooked advantages. Amateurs who thought the choices were expensive lithium batteries or cumbersome flooded wet cells should look into AGM batteries as a worthy alternative.

Filling in the battery gap.
Lithium batteries are common only in smaller applications such as portable radios. For off grid radio amateurs who need larger/higher capacity batteries for general purpose electric needs, lithiums are still a very expensive proposal. A 100 amp-hour lithium battery can cost nearly $1000.00 not including specialized charging systems and controllers. Comparable traditional flooded batteries can be found for less than $100.00. AGM batteries fall in between, checking in around $225 for a 100 amp-hour unit.

Flooded batteries are cheap but come with their own list of disadvantages: They’re really heavy, produce explosive hydrogen gas, can leak caustic acid, need to be replaced more often than most other batteries, and require ongoing maintenance that can be a real hassle.

AGM batteries are a practical compromise between these two points. They’re more expensive than flooded batteries, but nowhere near what lithiums cost. AGM batteries do not produce dangerous gasses nor will they leak acid if broken or turned at an odd angle. They are slightly lighter and do not require a lot of upkeep.

The architecture of an AGM battery.
The major feature of AGM batteries is that a mat or pad, often made of Fiberglas but other materials are sometimes used, is placed between the plates. This is the “M” in “AGM”. The purpose of the mat is to act as a sponge to hold the electrolyte in place and keep it from sloshing around. 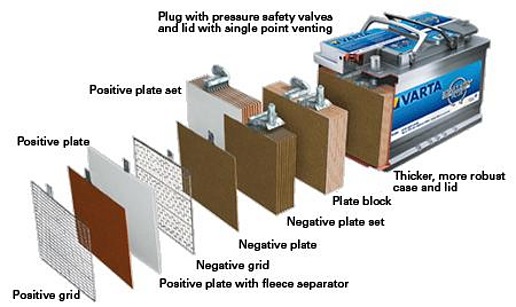 One of the more unique properties of AGM batteries is that their chemical process is recombinant. In conventional flooded batteries, hydrogen is pulled out of the electrolyte (which is mostly water). This breakdown is why flooded batteries occasionally need to be topped off with water and why the explosive hydrogen must be safely vented away. The AGM battery will recombine the hydrogen and oxygen to put water molecules back together inside the sealed system. The hydrogen that would otherwise be gassed out as an unwanted byproduct is effectively “recycled”. It’s a highly efficient process; over 99% of the hydrogen is recovered. This is how AGM batteries get away with never needing outside water added after they are sealed at the factory. They can literally make their own water.

AGM batteries have a safety valve that will release pressure if the battery becomes dangerously overheated but you may never get that far. They will generally show clear signs of their imminent death long before the valve gives way. If your battery feels excessively warm, develops a bulge on any side, or is making crackling/bubbling/ticking sounds, immediately disconnect it, let it stand for thirty minutes or so to stabilize, and discard it in an environmentally ethical manner. After you have cleared the trouble that caused the battery to fail (usually overcharging), go shopping for a new battery!

Are AGM and SLA/VRLA the same thing?
The short answer is yes. The long answer is that AGM is a variant of SLA with a slightly different internal structure and charge requirements. We could have a whole separate discussion about SLA batteries but it would mean getting pretty deep and nit-picky, so we won’t go there. Think of AGM batteries as a upgraded version of SLA.

Gel cell batteries: In gel cells, the electrolyte is mixed with a powdered silicon media so that it has a paste or gel consistency. Gel cells have many of the same outward physical characteristics we’ve already discussed (sealed, maintenance-free, can be used in any position, etc.) but they are not the same as SLA/VRLA/AGM batteries. Gel cells are often mistakenly classified as SLA/VRLA/AGM.

Charging AGM batteries.
AGM batteries will want a slightly higher charge voltage than traditional flooded cells. If you have a AC-powered battery smart charger with an AGM setting, all you need to do is push the appropriate button and let the charger figure out the rest. Most of the better solar charge controllers also have a setting for AGM.

If you’re doing it manually, a deeply discharged AGM battery should initially be charged at 14.6-14.8 volts, then reduced 13.6-13.8 volts for a float charge. A 100% charged, unloaded AGM battery should have an open circuit voltage of 12.8-13.0 volts, descending down per the chart below. AGM batteries are very intolerant of overcharging, so monitor your voltages carefully.

It is strongly recommended that an AGM-compliant smart charger be used. If you don’t already have one, it would be a very wise investment for your off grid capabilities. I have a Black & Decker VEC1093DBD that I picked up about six years ago. It’s a great unit that I use regularly. Unfortunately, it looks like it’s been discontinued. All I can suggest is to read the reviews on other models and make an informed purchase.

Going deep on “deep cycle”.
The issue of what exactly is a “deep cycle” battery came to my attention recently when Off Grid Ham reader David sent in an email asking about it. This seems like a good moment to clear the air.

“Cycle” refers to how far a battery can be discharged, usually expressed as a percentage. This is important to radio amateurs because we typically want a battery that will release a small amount of energy over a long period of time, as opposed to, for example, the battery in your car that releases very large but very short burst of electricity. It’s two totally different purposes therefore two totally different batteries.

“Deep cycle” simply means a battery can be run down very far numerous times and still be fundamentally undamaged. There is no formal definition of what is considered “deep,” but in general a battery that can be chronically discharged at least 50% would satisfy the requirement.

Deep cycle is an adjective used mostly on flooded batteries to distinguish them from engine start batteries. If you regularly discharged your car battery 50% or more, there is a very good chance you’d need to replace it a lot sooner than you’d like. It’s just not made to be drained that far that often. Many deep cycle batteries can be safely discharged down to 20%.

Keep in mind that no battery lasts forever and every charge-discharge cycle puts you closer to the end. Although you can run AGM batteries down to a 20% charge, it’s better that you don’t. Adding additional batteries to spread the load out will help avoid this issue. Even though it may cost more on the front end, over time you’ll recover a lot of that investment in the form of longer battery service life. No matter what type of battery you choose, never go with just the bare minimum capacity. 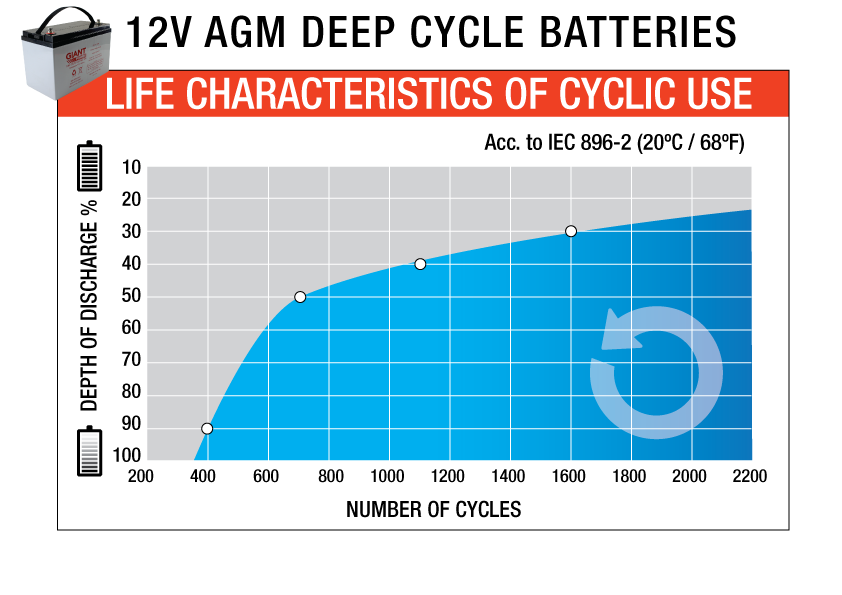 What you need to know.
Very few radio amateurs can afford to use lithium batteries exclusively, nor do they want to be limited only to flooded batteries. Absorbed gas mat AGM batteries are an excellent compromise. Although the they are more expensive, they offer a lot of advantages and are still within a price range most amateurs can accept. Maintaining AGM batteries for successful long term service is not that hard: Just mind your charge voltages and have enough battery capacity so that you do not regularly discharge them too deeply: Two batteries routinely discharged 40% each will last longer than one battery discharged 80%. More often than not, the middle of the road option is the best choice.