A follow up to my November 2017 article about electromagnetic pulses (EMP) was not in the plan. Then Off Grid Ham reader “Charles” hit my email inbox with a bounty of information related to this topic that was too good to keep to myself. I’ll respect his request not to be publicly identified for this article, but I want to thank him for his generous contribution of knowledge.

I’ve gone through everything Charles sent and came to the conclusion that EMP has been overlooked by the ham community to a much greater extent than originally thought. And amateur radio leadership, such as it is, has not produced or sponsored any meaningful data about EMP in over a generation!

Addressing the unknowns of a DIY Faraday cage.
As we discussed last November, home brew Faraday cages are an unknown because all the ideas out there are basically guesswork designs. None have been exposed to an actual EMP or tested in a lab for EMP shielding effectiveness. Charles’ experiments answer some of the questions.

He built a Faraday cage and also took the time to test it and document the results. In his version, he completely covered a cardboard box with an overlapping layer of aluminum foil and sealed it with metallic tape, then placed that box in another box (“nesting”) and covered it again with foil. He states that it is very important that the foil generously overlaps (3.00″ minimum) at the seams and makes good electrical contact with itself.

With a single layer aluminum covered box, he got -50 dB attenuation on a spectrum analyzer across the tested frequencies, which itself is pretty good. After adding the second shield layer he measured -80 dB attenuation or better, which meets military standards:

Charles’ testing demonstrates that the most effective EMP shield has the following qualities: 1) more than one layer/container (“nesting”), 2) make sure the layers/containers are insulated from each other, and 3) make sure none of the shields are grounded. A galvanized trash can & lid or metal file cabinet with the seams, cracks, and openings carefully sealed with metallic tape could count as one of the layers.

There is an important caveat to Charles’ findings: Although he went though a lot of careful effort to test his system accurately, and I am satisfied that he controlled for all the variables to an acceptable margin of error, his experiments were not performed under recognized test conditions and across all possible frequencies. To be clear, what Charles has done is far, far better than guessing & hoping, but it’s important to point out it wasn’t a level of research that would be done by professionals in a lab. Until the ARRL or some other group produces properly calculated data (more on that in a moment), this is as close as we’re going to get. 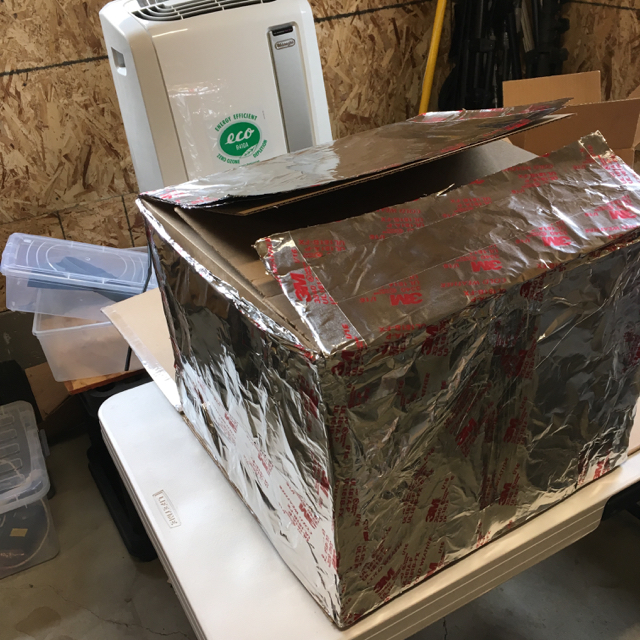 Charles’ home-brew EMP Faraday cage. This box alone tests at -50 dB attenuation across most frequencies. Note the generous use of metallic tape. Place this box in another aluminum-covered covered box and the attenuation goes to -80 dB. OFF GRID HAM READER SUBMITTED PHOTO ©2016

The EMP library.
Unfortunately, there are very few credible books and articles that address EMP in a way that is useful for amateur radio or off grid energy. Charles tipped me off to two, one of which hits the mark perfectly. The other falls short but can still be harvested for ideas.

EMP-Hardened Radio Communications by William Prepperdoc is well worth the money and offers real-world solutions for protecting your gear from EMP. More importantly, it describes how to protect the everyday equipment you are not storing in a Faraday cage, including your solar panels and inverters. After all, you want to use your stuff, right? You can’t hide everything in a can forever, but you don’t want to leave equipment vulnerable to EMP. Prepperdoc gives plenty of options. All of his suggestions can be implemented inexpensively and without advanced technical knowledge. He wraps up his book by discussing issues & strategies related to communicating after an EMP strike. At about $10.00 for the print version or $4.99 on download, this book is an excellent value.

The only criticisms I have are very mild ones: “William Prepperdoc” is an obvious pseudonym and this is a self-published/independent book. No specific information is given about the author’s qualifications other than stating he is “an engineer, ham, and physician” (the latter of which is impressive but has nothing to do with being an authority on EMP). Furthermore, self published/independent books are an automatic red flag. I’m not at all saying the guy doesn’t know what he’s talking about. I’m only saying there is no way to vet his qualifications and he doesn’t exactly inspire confidence in his work by being deliberately ambiguous about his professional background. The reader is left to take it on faith that Prepperdoc is a true expert.

On a related note, I am a stickler for verifying the credibility of information and the people who produce it, whether it’s for a personal project or researching an Off Grid Ham article. You should vet your sources too. It’s the internet age where anyone can appear as a very convincing “expert”.  Most have honest intentions but simply don’t know the material as well as they believe. A few are genuine experts.  The rest are willful frauds and pretenders.

The second book on the reading list has the lengthy title, EMP – Protect Family, Homes and Community: First in a Series on Nuclear Electromagnetic Pulse Protectionby Don White. I could not find any subsequent books in the series and Mr. White is now deceased, so I assume Volume One is all we’ll get.

White’s qualifications as an engineer are extensively documented. His book is more conceptual than practical and spends an inordinate amount of time discussing EMP shielding methods that the average person would have neither the skill nor the money to do (such as shielding an entire house). If you enjoy theory, statistics, geeking out with IEEE standards, and math, this book is for you. A motivated hobbyist could adapt White’s material to everyday use but it would take some patience to wade through it.

The book does offer a lot of background information that is outside the realm of amateur radio but is nonetheless useful, such as how geography effects EMP survivability and the lack of government and industry interest in addressing EMP threats.

White’s book is somewhat expensive. The print edition is about $23.00-$35.00 depending on where you buy it. I don’t think it is worth that much to the average radio amateur. I went for the downloaded electronic version on Amazon for $9.75. At that price point, it’s worth having.

The ARRL has been totally sitting this one out.
One party that has been glaringly absent on this topic is the ARRL. The last published information about EMP produced by the ARRL is from 1986! It was presented as a four part .pdf, and three of the four parts are no longer online. Our contributing reader Charles recently contacted the ARRL and got no reply when he suggested they update their decades-old advice. His thoughtful correspondence to them reads in part:

“…my reading of articles and blog comments leads me to believe that many radio amateurs are confused about this subject and are basing their preparations on incorrect information from Internet sources or technically misinformed hams or disaster preparation sites.”

Wow, Charles sure got that one right! The ARRL has completely blown off an important subject about which many radio amateurs are seeking guidance. Having no other options, hams must fend for themselves with unverified & untested methods. It is both surprising and disappointing that the premier organization for amateur radio in the world has said nothing about EMP since long before the internet was as common as indoor plumbing and microprocessor electronics creeped into every detail of our lives.

I’m hoping somebody in the ARRL executive suite reads this article and takes action to give radio amateurs something to work with besides a 32 year old document that is missing 75% of the original text. In the meantime, if the ARRL’s excuse is that they didn’t know anyone cared, then the radio amateur community can easily fix that misunderstanding via emails, letters to the editor, online forums, and on air conversations.

What you need to know.
I am deeply grateful to Charles for coming forward to share his important experiments, insights, and book recommendations. Through this kind of collaboration and spirit of service, we can advance the amateur radio avocation.

The topic of EMP is not nearly as glorious or fun as other aspects of amateur radio but I urge hams to take measures against this very real threat even if the methods are of unknown effectiveness. We also need to pressure the ARRL to catch up with the times and provide meaningful, credible data that hams can use.

17 thoughts on “EMP Protection for the Radio Amateur, an Encore.”