Off Grid Ham first discussed perovskite solar cells in February 2017. This still-emerging technology uses perovskite-structured crystals to pull energy from different colors of light. Silicon panels by comparison make electricity from a narrow band of light. The process for making perovskite solar is also cheaper and more environmentally friendly than silicon. Lastly, perovskite is over 25% efficient versus 13%-17% for conventional panels.

But nothing is perfect.

One of the components of perovskite solar is lead. As most everyone knows, lead is a heavy metal that cannot be released uncontrolled into the environment. A broken or otherwise compromised perovskite solar network is a serious contamination hazard to soil and water. This is (or rather, was) one if the biggest obstacles to making perovskite solar a real product that can be placed on the market.

Scientists at Northern Illinois University in DeKalb, IL. have developed a plastic film that will absorb and sequester the lead in the event that the panel is compromised. From the NIU report:

“The lead toxicity issue has been one of the most vexing, last-mile challenges in the perovskite solar cell field,” said Xu, an NIU professor of chemistry. “We think we have a highly promising remedy to this problem—and it could be a game-changer.

“In the event of a damaged cell, our device captures the great majority of the lead, preventing it from leaching into groundwater and soils. The films that we use are insoluble in water.”

When we’ll be able to buy perovskite solar is still not determined, but with this development that day may come a lot sooner. The benefits of perovskite cannot be oversold. When this product hits the market, it’s going to be a game changer. 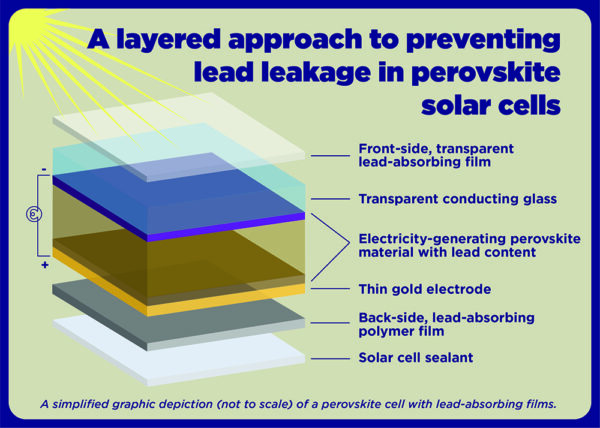 On a personal note, I am an NIU graduate (I got this tip from an alumni social media page). I am excited and proud that my alma mater is making significant contributions to advance renewable energy.

Off Grid Ham will post updates on this and other renewable technologies as they become available.