Has it really been that long?

I didn’t realize it’s been over three years since the last time Off Grid Ham specifically addressed go boxes. If the internet discussions and on air chatter are any indicator, it’s a very popular way to operate. It’s way past time to revisit the humble ham radio go box and come up with some fresh ideas.

In the last three years I’ve noticed an uptick in ham radio go box deployment. There are even entire social media pages dedicated solely to go boxes (or bags or whatever your thing is). I think there are several reasons why. Many operators live under homeowners’ association rules that severely limit having a fixed antenna. Theses operators may have no choice but to hit the road. Others want something they can take camping, for SHTF purposes, or EMCOMM. The various special event stations from parks and other significant places may be driving the trend too. There’s also new equipment manufacturers offering low cost gear. This opened possibilities to people who could not otherwise afford a dedicated go box.

As before, this is not going to be a step-by-step how to on building a ham radio go box. There are too many variables and too many individual choices for me to come up with a plan that works for everyone. Instead, we’ll go over some concepts to consider and questions you’ll need to answer before you begin.

What is the Number One priority for your ham radio go box? It it portability? DX-capability? Data modes? Keeping the cost down? Before you can construct a go box, you have to decide what trait is the most important. From there you can work in secondary needs. As with everything, there will be compromises, and some things are mutually exclusive.

The main reason ham radio go boxes do not live up to expectations is because they were not built to expectations in the first place. Or possibly, what you thought was a Number One priority turned out to be not such an urgent issue after all. Years ago my first go box was a huge fail because my Number One priority, cost savings, meant giving up so many other smaller things that they made the cost savings not worth it. 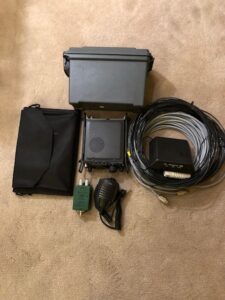 The main parts of my new & improved, much lighter ham radio go box. Left is a 27 watt folding solar panel. Top is a DC power box which includes a 13 amp-hour lithium battery and the charge controller. Right is a random wire antenna. Not shown: Alpha Antenna FMJ.

I used an old Yaesu FT-757 GX II radio. I also dug up an inverter, a solar controller, an FT-2900 2-meter radio, a 100 watt solar panel, and some various plugs and connectors. All of this stuff I already had. I built a nice wood box to mount everything in. My out of pocket cost for the entire project was less than $100.00, and most of that was for a 35 amp hour SLA battery. It looked impressive. I felt like a boss!

Well guess what? I achieved my goal of keeping the cost down, but my ham radio go box was so clunky and heavy that I didn’t care. Between the battery, the wood box, and all the other stuff, I could barely move that beast by myself. There wasn’t much “go” in that go box, unless I invested in a forklift too. I thought saving money was my Number One priority but I gave up too many other attributes to make it worthwhile.

That was my lesson in not only defining priorities, but also considering what else I have to give up to attain that priority. I inadvertently buried the cost savings under all the other problems. I used that go box only once or twice, then dismantled it.

After admitting defeat in my first attempt at a ham radio go box, I reexamined my priorities. I decided that having something light and truly portable was what I really wanted. Not necessarily “backpack portable,” but at least nimble enough to be carried a reasonable distance (say, a mile or so) by one person and still have enough power and functionality to be a practical, working radio station. This criteria would also have to include the antenna and power source. And speaking of power sources, I wanted off grid battery charging capability.

The FT-757 all by itself weighs over 11 lbs./5.20 kg. It had to be jettisoned from the project, along with that 35 amp hour battery. On my second attempt, I traded transmit power for less weight by getting a Yaesu FT-817 QRP radio. I then matched the rig with a DC power pack and random wire antenna.

The entire package came to under 20 pounds/9.10 kg and fit in a backpack. My new ham radio go box (or go bag, if you will) worked beautifully! Earlier this year I invested in an Alpha Antenna HD-FMJ vertical and I upgraded the DC power pack to lithium batteries. The antenna added bulk and weight, but did not negate the spirit of the project. I was much happier and got better results than when I had the abominable ham radio go box from hell.

I’m not going to sit here and tell everyone about how my setup is the perfect ham radio go box because, well, it’s only perfect for me. And quite honestly, nothing is truly “perfect” anyway. You are your own person with your own needs, priorities, and budget. While it’s fun and informative to glean ideas from others, in the end you are the only one who has to live with your creation.

One priority that should be built into every ham radio go box –no matter what else is at the top of your wish list– is flexibility. It’s very likely your needs will change over time. Unless you are wealthy enough to start from scratch with all new equipment every time the whim hits you, it’s a good idea to make your box scalable and reconfigurable. As much as I like my current setup, I’m already plotting my next iteration of radio-to-go. I like to experiment and change things up, but I’m not rich, so I make my go boxes with the assumption I will be repurposing the gear at some point.

The goal of this mental exercise is to encourage amateurs to put a lot of serious thought into their ham radio go box before they start spending money and assembling everything. I made the mistake of only looking at the bottom line and because of that shortsightedness my first go box was a huge fail. Experience is a a good teacher; other’s experience is an even better teacher!