If you are an off grid ham, you probably have a gas powered generator. And if you are a conscientious off grid ham, you have at least a few day’s worth of fuel stored. Does gas have a shelf life? Are all types of fuel the same? Are you unknowingly damaging your equipment by using improper fuel or improperly stored fuel? Have you ever even thought about the importance of fuel selection, storage, and handling? Understanding the gas that goes in your generator and getting the most out of it is a complex balance of chemistry, fuel management, and parsing myths and facts.

To answer the first question, yes, gasoline absolutely does have a shelf life. Over time the chemical components will begin to separate out and turn into a varnish-y slime. And for gas with alcohol added, which these days is pretty much the standard, this is particularly a problem because water is attracted to alcohol (more about this later). Very few of us use our generators every day. That means your reserve supply will very likely go stale before it is used.

The most straightforward way to avoid “stale gas” is to rotate your supply. Gas additives like Sta-Bil and Sea Foam will extend the shelf life of gas, up to a point. These products combine with the components in the gas and will retard –but not completely halt– the chemical breakdown process. Use them because they are effective, but don’t expect it to be a magic pill.

How you store your gas matters a lot. Gas cans should be kept 95% full, be tightly sealed, and stored in a dry place. The idea is to keep moisture out. Air carries water with it, so maintaining a minimum air volume inside the container reduces the opportunity for water to condense and accumulate. This is also why you should keep your generator fuel tank nearly full. Old school metal gas cans are still available and are better suited for fuel storage than the more common and less expensive plastic jugs.

The best gas can is…your car?

Another way to keep gas current is to use your car as the “storage container”. Since most people drive their car a lot more than they run a generator, your stock will rotate on its own so there are no concerns about “stale” fuel. 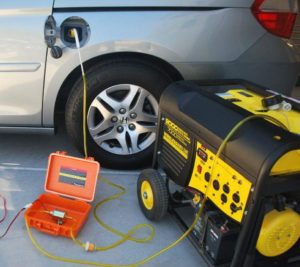 If you want to pull gas out of your car’s tank to refill the generator be aware that most cars have an anti-siphon/spill device in the filler pipe. I’m not going to drift into a detailed how-to, but there are tons of YouTube videos and internet resources out there that will guide you around this problem. There are also devices on the market that will defeat the anti-siphon/spill valve and let you remove gas from your car. These cool gizmos come in both electric and gravity feed versions and are an excellent accessory for the off grid ham. You can literally turn your car into a rolling mini-gas station.

If you think of it in terms of not having to keep several gas cans sitting around, not having to buy gas preservatives, plus not constantly having to deal with rotating gas (and the related expenses), transfer pumps/siphons are an investment that pays for itself. My vehicles can hold nearly fifty gallons of gas between them. That’s way more than I could realistically store in individual cans and the rotation issue takes care of itself. I can simply fill a small 2 gallon can as needed or pump gas from my vehicle directly to the generator.

Going through the corn maze.

For many decades, gas was gas. It didn’t require a lot of thought. You just fill ‘er up and go. Today there is pure gas, 10% ethanol, 85% ethanol, and soon-upcoming 15% ethanol. What is all this, and what does it mean in terms of fueling your generator?

In the USA, ethanol, or grain alcohol, is primarily made from corn. You’ve probably heard of “moonshine” or “corn squeezins.” Yeah, in its base form the ethanol in your tank is essentially the same 200 proof stuff famous for making people ripping drunk. Starting around the year 2000 manufacturers started adding ethanol to gasoline. It’s a renewable resource and the United States has a breathtaking capacity to produce enough corn to make billions of gallons of ethanol. Ethanol is not exactly a “green” energy source. It is carbon-based and produces pollutants both in the production phase and as a byproduct of combustion.

American gasoline is classified as follows: E0 (zero), which is 100% gas with no ethanol added. Then we have E10 (up to 10% ethanol), which is the most common. In third place is E85, commonly known as “flex fuel” and contains 85% ethanol. Lastly there is E15. It is, you guessed it, 15% ethanol. The EPA approved E15 for sale in the USA but as of right now it is not on the market.

Ethanol attracts and holds water. This is not such a big deal if the water concentration is small and the fuel is cycled often. But when gas sits around, the alcohol attracts more and more water to the point that it actually separates out of the fuel. Chemists call this process phase separation and it is real bad news if it happens.

Normally the water will bond with the ethanol, be combusted in the engine and blow out the exhaust as steam with no issues. But if phase separation occurs, the water is no longer bonded to the ethanol. It’s just pure water not bonded to anything. Of course, if pure water gets sucked into the engine, you are done.

Another attribute commonly cited as being a problem for ethanol blended fuels is that the ethanol accelerates the decay of plastic and rubber parts used in small engines. This is not nearly as true as it used to be. Any engine made in the last 15-18 years or so was designed with ethanol in mind and should be ok. The problem is that there are a lot of generators and power tools older than that still in circulation.

The last bit of bad news: Since alcohol does not have as much energy as E0 gasoline, you’ll need more E10 to produce the same power you would get out of an equal amount of E0.

So what should you use as generator fuel?

If you have a generator less than 15 years old, then using E10 is probably ok as long as the fuel is not allowed to go stale. In general, the problem with E10 fuel is not so much the ethanol itself, but the fact that it attracts and holds water. The only way around this is not to let it sit around long enough to do any damage. Do not use additive products such as STP or HEET as they are nearly 100% alcohol. Introducing more alcohol into your engine will just attract more water.

There is almost universal agreement that any gasoline over E10 should never, ever be used in a small engine unless that engine is explicitly designed for the higher ethanol concentration; some manufacturers are going well out of their way to warn consumers. E15 is not widely available yet, but once it is, pay attention to what you are buying. The same goes for E85. If you live in the state of Maine you have it easy…gasoline with an ethanol content greater than E10 is not permitted for sale there.

If you insist on using only “real gas” for your generator, E0 is available but you will have to hunt around for it and expect to pay a premium. One filling station near my house sells “high performance racing fuel” for about $4.00/gallon. It’s really just ordinary E0. Some hardware stores sell gallon cans of E0. Most marinas and all airports have it too. You might also want to ask your local fire department or public safety agency if they know where to get E0 because many of them will not use E-anything in their power tools.

The only way to avoid the E-stuff and fuel stabilizers and rotating and all the associated drama is to not use gas at all. Generator fuel does not have to be gasoline.

Gas generators can be adapted to run on propane or natural gas. Propane & NG will not go stale, do not need to be rotated, and will not leave gunk in the guts of your engine. If you do not already have a generator, when you go shopping consider spending and extra $100-$200 for a dual fuel or tri-fuel version. Dual/tri-fuel engines can easily switch between fuels. If you already have a gas generator, fairly easy DIY tri-fuel retrofit kits are available on line. Other than the added up front cost, the only downside is that you will need to do some plumbing work in your house to use the natural gas side.

Diesel generators also offer an escape from gasoline hassles. Diesel fuel does not have any ethanol (yet) and is much more shelf-stable. The bad news is that diesels in the 2000-10,000 watt size that off grid amateurs like are hard to find and very costly.

14 thoughts on “Gas Up The Generator? It’s Not That Simple.”