It came a little late for some of us, but spring and warm weather has finally arrived. If you were laying low and avoiding radio activities over the winter because of the weather, then your chance to get out and do some portable off grid ham radio operating has arrived.

Operating portable is the most popular version of off grid ham radio. Many amateurs cannot regularly operate off grid from their home stations due to A) financial concerns, (they cannot afford a dedicated fixed system); or B) logistical concerns, (they do not have physical space to install a system or are restricted by ordinances/homeowners’ association rules). For the majority of hams, going portable is the only off grid option they have.

Defining “portable”.
Portable off grid ham radio means different things to different people. For some, it’s operating from an RV or motorhome, or maybe from a club communications trailer. For others, it’s as simple as a chatting on a handheld radio while walking the dog. For the purpose of this discussion, portable is defined as HF through VHF capability (possibly UHF) where all the equipment, antennas, and power source can be carried by one person.

Operating HF to VHF portable off grid ham radio in the “carry it with you” sense necessarily means QRP. There are very few practical ways to have a 100 watt radio and a reasonable power source in a carry-portable configuration. And before you all start peppering me with links to YouTube videos & blogs of people who have done it, I am already aware of them.

Here’s my analysis of these projects: High-power carry portable setups are often quite clever and do work, up to a point, but they all come with the same two weak links: The power source and overall size and weight. For example, one very popular YouTuber has a 100 watt radio mounted on a backpack frame with a 10 amp hour battery. To her credit it’s a well put together rig that incorporates many great ideas. The catch: With only 10 amp-hours on the battery, she’s not going to push a 100 watt radio for very long, and her otherwise thoughtful design has no provisions for recharging in the field. After a few short contacts she’ll be trekking back down the mountain with that thirty-plus pound beast to look for a place to plug in.

So our goal will be to come up with a practical, working, carry portable off grid ham radio station, not a glorified science fair project and/or YouTube showpiece. Our portable station will ideally come in under 20 lbs. That circles us back to QRP. Running reduced transmit watts means smaller, lighter radios and batteries plus a realistic way to recharge in the field. By breaking free of the “cult of 100 watts” we can scale everything down and avoid a lot of roadblocks and expense.

First things first…the radio.
In an earlier Off Grid Ham article I suggested that to enjoy QRP you could simply turn the transmit power down on your full power radio and go for it. That’s fine for operating from home with the stuff you already have, but for true portable off grid ham radio, you’ll have to commit to a QRP-specific transceiver. The expense is probably the single greatest barrier to entry, but there are ways to mitigate this problem.

Let’s be honest: Amateur radio can be an expensive hobby. Not everyone has $1245.00 to drop on a dedicated-portable Elecraft KX2 (and for that price you still have to put it together yourself!). However, there are very clean, modestly priced used radios such as the TenTec Argonaut. MFJ has a a partially-assembled QRP radio kit for less than $100. It only works on 40 meters, and only on CW, but for the money it’s a heckofa bang for the portable off grid ham radio the buck! If you’re trying to set a record to get on the air for the least amount of money, there is a single-frequency transceiver kit for less than five dollars!

Ebay and Amazon have a good selection of relatively inexpensive rigs that will get you into portable off grid ham radio for not too much money. The reputation of some of these manufacturers does not exactly inspire confidence, but it’s an option worth exploring. Personally, I’d rather spend the same money (or less) on a used TenTec Argonaut than some obscure off brand import.

After years of rumors, Yeasu has released the FT-818, the successor to the legendary FT-817ND QRP radio. The 818 has not been out long enough to know what effect it will have on the price of new & used 817ND’s, but expect to see some good deals real soon. Like all things technology, when a new gizmo comes out the value of the old gizmo usually goes down.

The bottom line is that to run portable off grid ham radio, you’ll need to come up with a rig that’s small and light enough to carry along and does not consume so much power that you must also lug a hulking battery and the means to charge it.  If you have the funds, then jump right in with a KX2 or FT-818. Those of more modest means will need to do some homework, but there reasonable options.

Cliff Batson, N4CCB has a fantastic YouTube channel that covers QRP radios is great detail. If you’re not sure what you want or which direction to go, spend some time watching his very well done videos and you’ll come away with a lot more insight. Cliff also has an active blog that provides a lot of supplemental information.

Antennas for portables.
The second hurdle to portable off grid ham radio is the antenna. Although there are many options, antennas come in two basic formats: Home made and commercially produced.

Home made antennas are the least expensive and provide a great learning experience while building them. They’re so inexpensive that you can have more than one for different portable situations. There are literally thousands of books, web sites, and YouTube videos on how to make your own “porta-tenna”. The disadvantages of home brew antennas are few but meaningful:

Home made antennas can be tricky to build and perfect. Even established designs are going to have quirks that require patience to work out. Because they are made from common materials, the size and weight of the finished product may be greater than you’d like.

If you do make your own, don’t follow anyone who is trying to reinvent the wheel, or drift too far off task yourself. If you want to be an antenna experimenter, fine, it’s tons o’fun, but that’s a separate adventure. For our goal of getting into portable off grid ham radio, we need a proven, low-drama antenna that is not in danger of becoming a project unto itself.

Lastly, many home made antennas will require an antenna tuner, which adds expense to the project and will take up space in your carry gear. QRP-sized antenna tuners are not particularly expensive nor big and heavy, but this is something to keep in mind.

With commercially made antennas, all the guesswork is done for you. There is no lengthy testing, tinkering, or frustrations. They really are a “plug and play” affair. You can be on the air within minutes after the box arrives at your door. Factory built antennas are usually easier to transport and set up than homebrews.

The big disadvantage is cost. They can run several hundred dollars, maybe more than what you’ll pay for a radio, and you get performance that is about the same as a cheap DIY version. Be careful and know what you are really buying. Some are just jazzed up versions of antennas you can easily make yourself. DX Engineering, Chameleon, and MFJ are the three most popular brand names.

Whether you build your own antenna or buy one already made, remember that antennas for portable off grid ham radio are always a compromise. I use this portable antenna for HF connected to my FT-817ND and experience great results with it. I used to deride commercially made antennas as overpriced and gimmicky; lately I’ve been reconsidering that position. I still can’t justify the cost, but every ham has to make their own decisions.

The power source.
A power source is the probably the easiest & cheapest part of the portable off grid ham radio experience. A QRP radio will run all day on a small solar panel. Add a 5-7 amp hour external battery and you’ll really be set. I use the Portable DC Power Pack. Between that and a 27 watt folding solar panel I never have to plug my 817 into the grid. If needed I can leave the power pack behind and run straight off the solar panel.

There are a variety of all in one solar “kit systems” and “solar generators,” but most are overpriced and more than you’ll need for QRP operations. Don’t overthink or over do this. There is no reason to spend $200-$500 or more to support a five watt radio and a few accessories.

Putting it all together.
So you’ve assembled all the components needed for a portable off grid ham radio station. Now you have to decide how you’re going to package everything so it is neat, organized, and ready to go. Unfortunately, there are no tricks here. It’s a very personal decision and you’ll probably experiment with different methods before you find one that works for you. I use a backpack, but sometimes switch to a plastic tote box.

Be sure to include extras such as spare fuses, adapters & connectors, nylon ties, maybe a few hand tools, and whatever else you may need to solve small problems in the field. 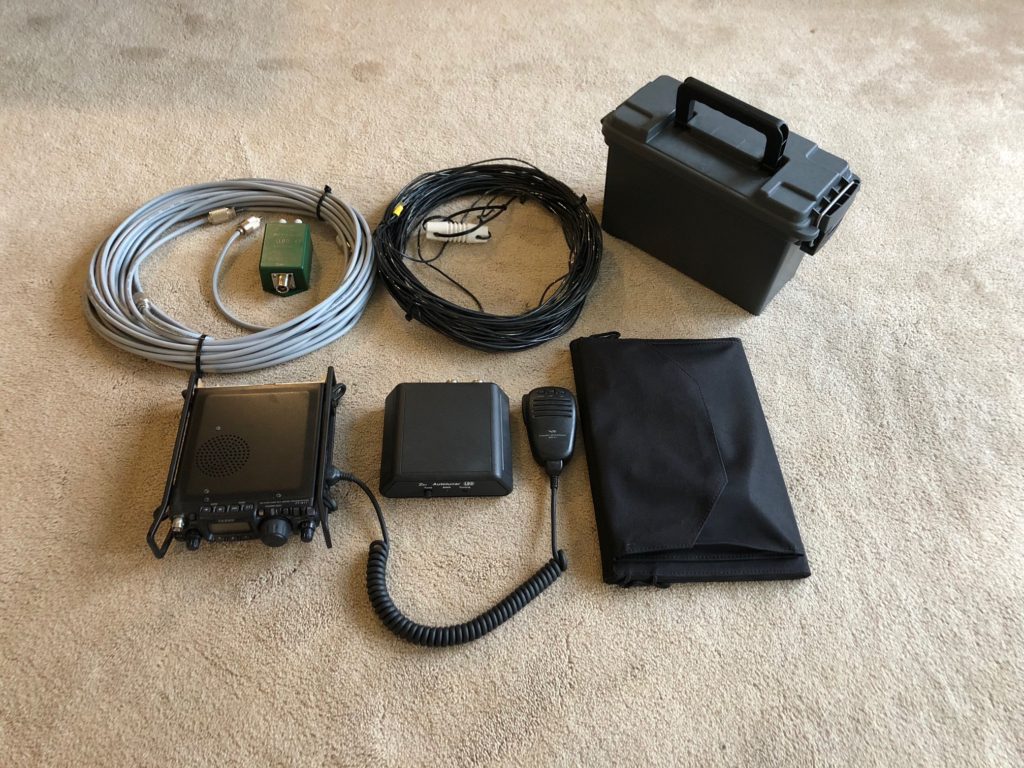 The photo above is my entire portable amateur radio station capable of HF-UHF. Bottom row: FT-817ND, Z817 automatic antenna tuner, 25 watt folding solar panel. Top row: Coax with unun, random wire antenna with counterpoise, battery box. Not shown: extra fuses & supplies. There’s one important point: You need a place to string up the antenna. If no trees or other existing support points are available, I have PVC pipes that can be staked in the ground. This makes the setup a lot less “portable”. 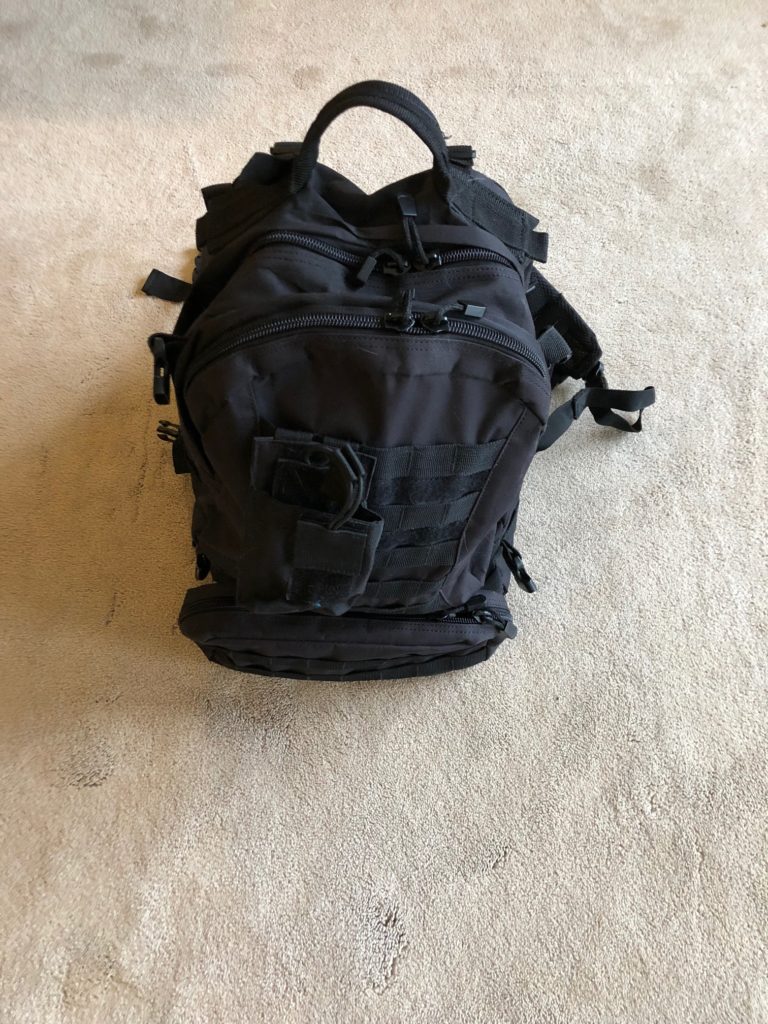 My portable radio station fits in this backpack and weighs a little over 21 lbs. That’s still pretty heavy, but I can cut that weight almost in half by bringing a shorter coax cable (currently it’s 50 feet) and excluding the battery box and running the 817ND straight off the solar panel.

What you need to know.
Portable off grid ham radio requires some money and commitment, but the overall experience and learning gained is priceless. For some, it’s a great excuse to get outside and enjoy fresh air and radio. For survivalists/preppers, it’s an important exercise in real world conditions. To anyone, it can be like having Field Day whenever you want. Running portable does not have to be complicated. Don’t worry about getting everything right the first time. It is meant to be fun and enlightening.

An introduction to QRP

Some additional thoughts about go boxes and portable operation

From elsewhere on the internet:

Here is a lengthy but hardly comprehensive list of popular QRP radios.

7 thoughts on “Portable Off Grid Ham Radio: The Basics.”