It’s a given that a multimeter is one of the radio amateur’s best friends. The device is so fundamental that you can’t be a serious ham without one. Yet, most hams don’t know much about their multimeter, or how to select a good one. I will explain the various aspects of multimeters, what to look for when buying, what to avoid, and what a multimeter can do.

For the purpose of this article, we will define a multimeter as an instrument that will measure AC and DC voltage, AC and DC current, resistance, and other electrical properties as described below.

Analog Meter Ohms-Per-Volt: The first meter attribute a radio amateur needs to be concerned with is accuracy. In most analog multimeters this is given as an ohms-per-volt rating, which is an expression of how much the meter itself alters the reading it is trying to take. The technical minutia of ohms-per-volt is beyond the scope of this article, but this well written piece from All About Circuits does a great job of explaining the concept. Suffice it to say that you want as high an ohms-per-volt metric as possible.

Here’s why it matters: The instant the meter probes touch the points being measured, the meter itself becomes part of the circuit under test and places a load on the circuit that if unaccounted for can significantly effect the accuracy of the reading. The less internal resistance the meter has, the more inaccurate the reading will be. This factor was very important in the days when all meters had analog displays and resistor multipliers to produce the various measurement ranges. Analog multimeters rated at 20,000 ohms-per-volt and up are considered acceptably accurate. Photo 1 below is a classic analog multimeter commonly used by radio amateurs. In the lower left side of the meter face it indicates a DC accuracy of 25,000-50,000 ohms/volt depending on the range. 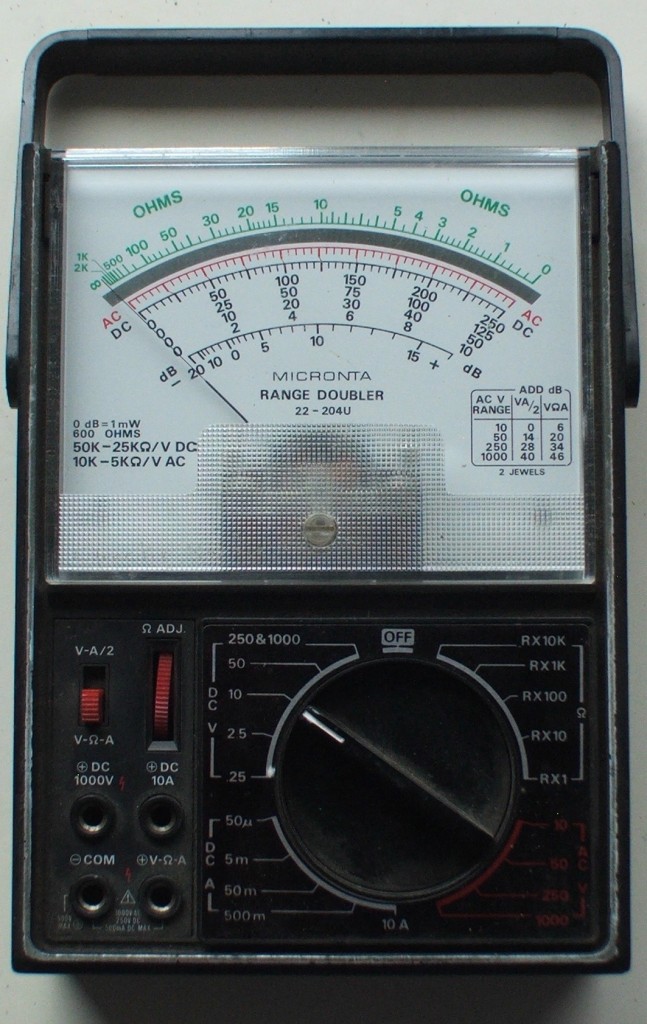 Enter The VTVM: The vacuum tube voltmeter (VTVM) was an early effort to improve accuracy. The principle was simple: Instead of a network of resistors, the input voltage was fed into a vacuum tube amplifier that in turn produced a voltage output to a mechanical analog meter. This resulted in excellent accuracy because the amplifier tube’s very high resistance placed almost no load on the voltage being tested, and the current needed to physically move the meter indicator pointer was no longer a factor. For many decades, VTVMs were the most accurate meter available outside of a lab. Although they are no longer in production, clean used models are easily found at swap meets for little money and many old timers still swear by them. A big VTVM drawback is that they need a 120 VAC power source, so they are not considered portable.

Today’s Digital Multimeters: Modern digital multimeters have a microprocessor controlled amplifier-converter that replaces the old vacuum tubes, with thousands of times more accuracy. Where old analog meters were considered good if they had 20,000 ohms/volt, digital meters often rate at ten million ohms/volt. They place no meaningful load on the test circuit. Digital multimeters are seldom advertised with an ohms/volt specification anymore. Instead, they have an accuracy expressed as a percentage of the indicated voltage. Digital multimeters typically have a DC voltage accuracy to within a few thousandths of a volt.

Multimeter Resolution: Somewhat related to accuracy is resolution. This attribute determines how small a reading the meter will take or how many decimal places out a multimeter display will go. Analog multimeters will go only to two decimal places (and that’s if you have really good eyesight) unless it is specially designed to measure very small voltages. This is due to practical considerations more than technical limits: Only so many calibration lines will physically fit on a dial face.

Features You Do Not Need: Many digital multimeters will come with extras that look attractive but are either not truly needed or do not add enough value to make them worth having. Transistor testers, capacitor checkers, and decibel measurement are all on the useless junk function list. Anything with a lot of extra gizmos are what I call a “Swiss Army knife multimeter:” They can do all things sort-of well, but no one thing exceptionally well. If you need a transistor tester or a capacitance meter, buy them separately. Photo 2 below is an example of a Swiss Army knife multimeter. Besides voltage, current, and resistance it can also measure capacitance, conductance, plus test transistors and capacitors. It all looks so impressive but there is just too much going on in one box for this meter to have real life usefulness. In my thirty-plus year career as a ham and a professional technician, I never, not once, had a need to measure siemens (conductance).

In addition to accuracy, resolution, and features, you should look for sturdy physical construction and solid test leads. My personal favorite, the Fluke 115, (Photo 3 above) has a heavy plastic enclosure that by itself would be perfectly acceptable, but the multimeter is further protected by a thick removable rubber collar. I’ve dropped it, dropped stuff on it, and done things that would have killed anything else. It just keeps going. Notice the simple single dial control and absence of lame “Swiss Army knife” fluff. This multimeter also measures to three decimal places on all the lower ranges and has a display backlight. Lower end multimeters have brittle plastic enclosures and test leads that will not hold up under even modest use. I have broken more test leads on cheap multimeters that I can count but still have the original leads on my Flukes. Another great extra to look for on a digital multimeter is a hold butten.

A multimeter is as important to a ham operator as a hammer is to a carpenter. You are going to use your multimeter all the time and depend on it to troubleshoot and stay on the air. It’s likely you’ll need more than one multimeter. Do your homework, choose carefully, and you’ll be happy with the results for years to come.