A while back we took a dive into Kirchoff’s Current Law. It’s just one of dozens of scientific principles that explain how and why electronic circuits work. Though one does not need to have deep knowledge of these principles to enjoy amateur radio, having a basic understanding makes one a better amateur. It’s the difference between someone who truly knows the how and why of electronics and an “appliance operator” who simply memorized answers to test questions. Ohm’s Law is arguably the most fundamental of electrical principles, so we’re going to pick it apart and talk about what it really means. Countless textbooks and entire college engineering courses are dedicated exclusively to studying Ohm’s Law. We cannot cover everything in one blog article, so you are encouraged to study further on your own.

The man behind the name.

Georg Ohm (1789-1854) was a German mathematician, teacher, and physicist. In 1827 Ohm published The Galvanic Circuit Investigated Mathematically. This now-landmark publication described what is universally known today as Ohm’s Law. Ironically, Ohm ended up resigning his faculty position at Jesuit College due to the school not taking his work seriously. It was only afterward that his discovery was validated. His research is considered the birth of modern day circuit analysis.

Ohm was not the first to propose a relationship between voltage and current. Scientists before him studied the phenomenon too, but Ohm was the first to prove and document it. Ohm died in 1854 at the age of 65 in Bavaria, now Germany. 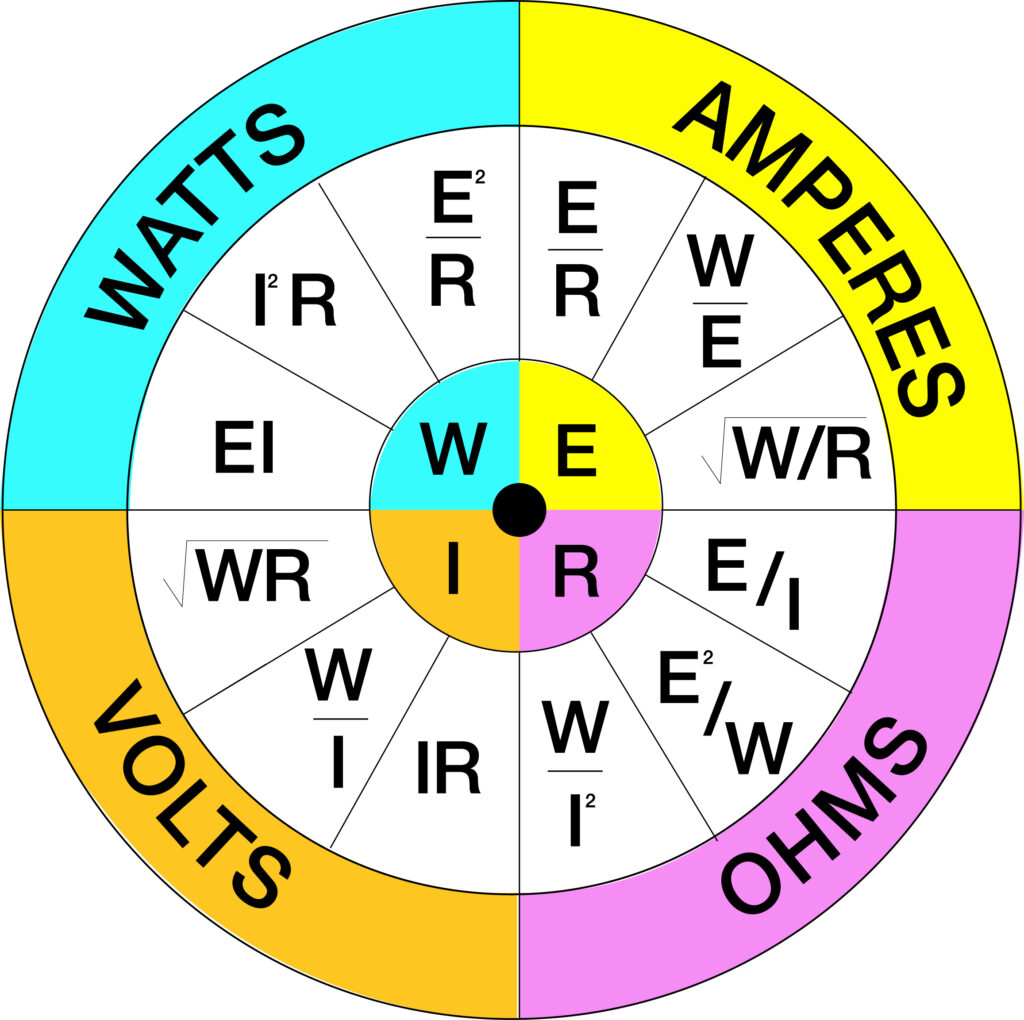 What is Ohm’s Law?

The unit of resistance is named after Ohm, but it may surprise many that Ohm’s Law is not directly about resistance. Ohm’s Law states that current is directly proportional to voltage. Resistance is of course a controlling component of that dynamic. Ohm’s Law only applies if the other physical characteristics of the circuit remain constant. In particular, temperature can effect the electrical properties of conductors. 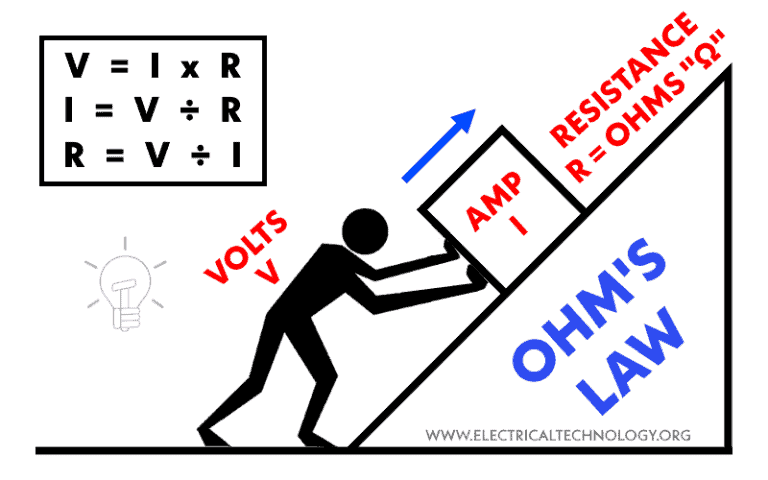 Plugging in the numbers.

Let’s take the example of an ordinary incandescent light bulb. The resistance of a light bulb filament is very small. I checked a 60 watt lightbulb and it is only 17 Ohms; that’s almost a dead short. If we do the math using the face-value resistance, we get numbers that don’t make sense: 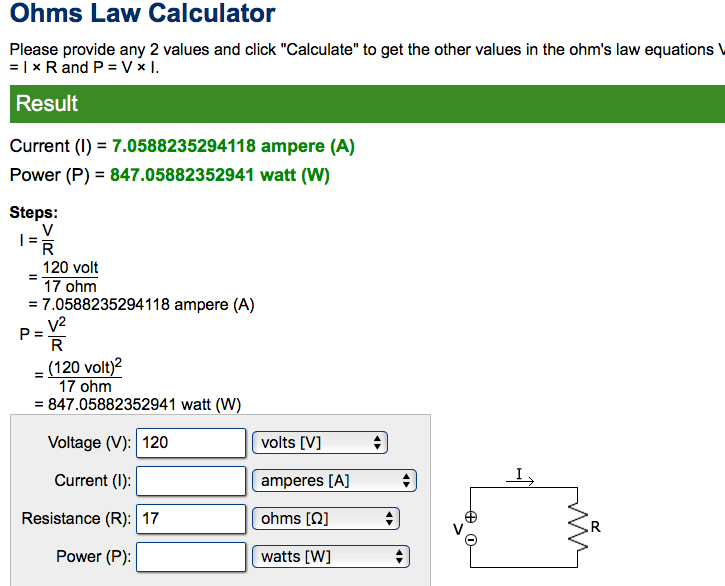 As we can see in the screenshot above, a 17 ohm load at 120 volts (standard North American commercial line voltage), is a whopping 847 watts and just over seven amps of current! We all know that in the real world a “60 watt” light bulb does not drink that much juice. What’s going on?

What’s going on is that 17 ohms is the value of a cold, unpowered filament. When the bulb is turned on, the filament heats up from the current running through it. Heat changes the resistance of the filament. If we punch in the numbers using the known wattage of the light bulb, we get very different results: 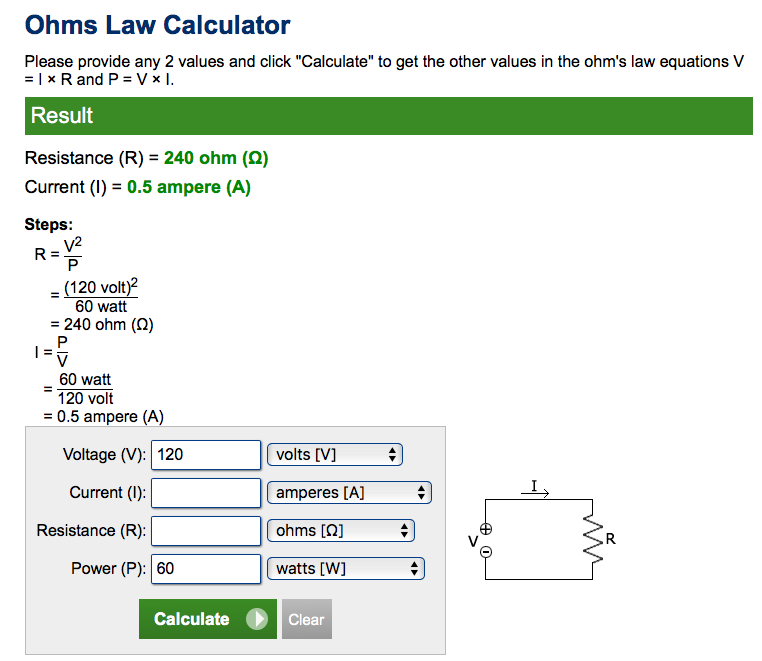 In our second calculation, the resistance of the powered up light bulb suddenly increases to 240 ohms. The current is a reasonable 0.5 amps. All the numbers make sense. This illustrates how temperature can effect resistance and vastly change the characteristics of the circuit over what it looks like at face value.  Although an incandescent light bulb violates Ohm’s Law (because the physical properties of the filament do not remain constant), Ohm’s Law is still useful for analyzing the electrical behavior of the bulb circuit.

Since we cannot directly measure resistance in an energized circuit, Ohm’s Law is key to calculating the value mathematically.

Good engineers will take temperature into account when designing circuits. All resistors have a temperature coefficient of resistance (TCR). TCR indicates how far the resistor will “drift” off its established value when exposed to heat. TCR is usually expressed as parts per million per degree centigrade (ppm/c) based on what value the resistor has at a standard of 25 degrees centigrade. So, for every degree above 25c, the resistance will change a known amount. In circuits where a very high level of precision is needed, the TCR helps engineers keep everything within tolerance.

There is such a thing as a “digital resistor” with active circuitry that will automatically compensate for temperature changes. Digital resistors are most commonly found in fiber optic communications gear. Another component, the thermistor, is an older-generation passive resistor that, as the name implies, can change its value with ambient temperature.

If  your radio gets wiggy in hot environments one of the contributing causes could be components drifting out of specification from excessive heat.

Ohm also applies to AC circuits, but there are some important distinctions.

Purely resistive AC loads, such as an electric heater, have a constant resistance so the current will always be proportional to the voltage as it goes through its 360 degree cycle. In engineering speak, the current and voltage are in phase. In a reactive load, there are other factors that effect the voltage-current-resistance dynamic.

Reactance is a version of resistance that exists in some (but not all) AC circuits. There are two flavors of reactance: inductive and capacitive. Both types can and often do exist in the same circuit. The geeky details of reactance are farther than we need to go this time around. What you need to know for now is that reactance is a form of resistance that can vary according to the power demand of the load, capacitance and inductance in the circuit, and the frequency. Examples of reactive loads are AC electric motors and of course radio circuits.

The mathematical formulas used to calculate inductive and capacitive reactance were not developed by Ohm, but they do have a pedigree back to him.

A knowledgable radio amateur will have a grasp of Ohm’s Law without necessarily doing any math.

Problem: You are setting up a solar array that produces 25 amps at 12 volts (300 watts). The wire run will be 50 feet. All you have is 6 gauge wire, which is unsafe for this application. With your knowledge of Ohm’s Law and without doing any calculations, what can you do to make the system work? Explain why.

Solution: Wire the solar panels to produce 24 or more volts. The resistance of the wire is constant no matter what the voltage may be. Therefore, when the voltage goes up, the current will go down (Ohm’s Law) to a level that is safe to run through 6 gage wire. An MPPT controller will convert the 24 volts to 12 volts for your radio.

If the voltage is doubled then the current is halved but we still get the same 300 watts: This thought process can also be applied to batteries and power supplies. With a little knowledge and experience you can “eyeball” solutions to simple circuit problems without crunching any numbers. lastly

Lastly, this wire gauge calculator will help you determine the proper size wire for any application.