As basic as it gets.

If you do not own at least one good multimeter, you’re not a serious off grid amateur. If you’re new to amateur radio, ok I’ll give you a pass. For everyone else, multimeters are such a fundamental tool that there isn’t any wiggle room on this. It really is that straightforward.

Luckily, multimeters are easy to use and relatively inexpensive. If you do not have a multimeter, this article will teach you what the various terms mean and what to look for when you go shopping. If you already have a multimeter, stay with us. You’ll pick up some additional insight  and a few ideas to pass along to others.

We all know multimeters measure three basic values: Voltage, resistance, and current. Some instruments measure other values (we’ll get to that soon), but for now we’ll focus on the “big three”. Beyond the “big three”, what do you need to know?

Accuracy is the difference between what the meter indicates and what the value actually is. There is more than one way of defining accuracy. First, as a percentage. If a multimeter has an accuracy of 2%, that means the actual voltage will be within two percent of what is indicated. For example, 100 actual volts may be read by the meter as between 98 and 102.

Another expression of of accuracy is a percentage of the full scale. This attribute if found only on analog meters. For example, if an analog meter’s accuracy is 2% of full scale and you are on the 600 volt range, the actual voltage in your circuit can be 12 volts either way. This is different than 2% of measured voltage.

It’s important to know that on all multimeters, the accuracy will not necessarily be the same across all ranges and values. Accuracy can vary depending on the design of the device, skill of the user, and other variables. Even ambient temperature can affect accuracy.

Meter resolution is how many decimal places the meter is capable of indicating. A multimeter that measures to 1/1000 (or 0.001) is more accurate than one that only goes to 1/100 (or 0.01), or at least it would appear so. Technically, the former is ten times more accurate than the latter. Some manufacturers market their multimeters this way, but it’s a scam.

Here’s how the hustle works: A multimeter can have any number of decimal places but that does not say anything about accuracy of the data. Using our previous example, 2% is 2% no matter how many decimal places are displayed. That two percent does not improve just because there’s an extra digit in there.

I’ve seen low end multimeters that go to three decimal places and it was obvious that the manufacturer was being deceptive. By going out to 0.001 they could say they were selling “high resolution” devices, and that would be an honest statement. The deception is when they imply resolution equals accuracy. The average consumer sees this and thinks, “it goes to three decimal places! It must be good!” Off Grid Ham readers are more savvy than the average consumer, right? Resolution and accuracy are not the same thing! Marketing hustle is alive and well in the electronic instrument industry.

In the old days when everyone used an analog meter, sensitivity was a big concern. Modern digital multimeters, even cheap ones, are so far and away more sensitive than their analog elders that end users don’t even really concern themselves with sensitivity anymore. Still, it’s worth knowing because you will see it pop up from time to time.

The instant the meter probes touch the points being measured, the meter itself becomes part of the circuit under test and places a load on the circuit that if unaccounted for can significantly effect the accuracy of the reading. The less internal resistance the meter has, the more inaccurate the reading will be. This was very important in the days when all meters had analog displays and resistor multipliers to produce the various measurement ranges. Analog multimeters rated at 20,000 ohms-per-volt and up are considered acceptably accurate.

Digital multimeters are many, many times more sensitive that analog. The reason is simple. Digital multimeters use integrated circuits that themselves present almost no load to the circuit under test because they do not need voltage or current from the circuit to power a mechanical display. Many manufacturers do not even list specifications for sensitivity on their digital multimeters because it’s so good, it’s not even an issue. Digital meters have the equivalent of millions of ohms per volt, sometimes over ten million.

Meter count is not something that off grid amateurs need to be too obsessed with, but it helps to have a basic understanding. When using a digital meter, have you noticed that the the number of decimal places displayed goes down as the range goes up? This is controlled by the meter’s “count” and it’s related to resolution.

“Count” refers to the upper limit that a meter can display in a given range not including the decimal point. For example, if the count is 2000 and you are measuring one volt, the display will show 1.000. When the measured value increases beyond 1.999 volts, it will now show 2.00 volts (the last digit must drop off to keep the count under 2000). This is why digital meters will have fewer decimal places as the voltage range goes up. No matter what, the meter will not display any number greater than than 1999 in any range (decimal notwithstanding), so it has to move the decimal around to stay below that parameter.

A count of 2000 is adequate for most amateur radio applications. The better quality meters will have a count of 6000 or more.

Your digital meter does not make continuous measurements. Instead, it takes a sample reading at predetermined time intervals and that’s what you see on the display. The shorter the time between “reads” the more up to date your data will be. For example, my favorite Fluke meter takes a reading four times every second. If you have a cheap meter that seems slow to respond to changes in the circuit, it’s may be due to having a slow read or update time.

This is one area where analog meters have an edge on digital. Analog meters will change their output in real time; there is no delay. This is also why analog meters are preferred when monitoring changes is important, such as when aligning the an old tube receiver.

Should you have a digital or analog meter? Ideally, you should own both. If you can afford only one, then get the digital. Keep in mind that one good meter is better than two junky ones. 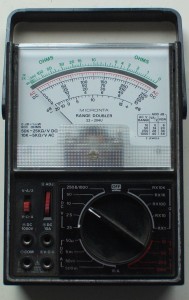 Digital multimeters are much more sensitive and accurate and are generally a better value for the money. Analog meters can serve the same functions but using them properly is something of an art. If you are into working on antique tube radios, an analog meter is a requirement. Part of servicing those old rigs is monitoring changes in voltage and that’s hard to do with a digital meter as we just discussed.

Fluke multimeters are not inexpensive but not totally out of reach either. You will buy it only once. For my off grid & amateur purposes I have a Fluke 115 and it is everything I need. My analog meter is the venerable Radio Shack 22-204U that I’ve had for over thirty years and it still works perfectly. I’ve built up a large collection of other meters and amp-clamps over the years, but the Fluke 115 or the Radio Shack are my go-to 99% of the time.

The used market is full of really nice analog and digital multimeters. An older generation used Fluke 77 digital meter is less than $100. Radio Shack 22-204U analogs sell in the $15-$35 range. Both are a fantastic value! Do the math: For about $100 you can buy these excellent used units and have two meters that still have many years of reliable service life left in them.

For new analog meters, Simpson is still around and still made in USA but they will cost you serious money. Used Simpson analog multimeters go for $50-$100. If money is an issue, you’re better off with an old used Fluke or Simpson instrument than almost any of the cheap new units sold at hardware stores.

If your’e wealthy and into bling, the Fluke 83V might be for you. I have one of these, although technically it’s not “mine” because my employer bought it for me. My job requires the accuracy and resolution the 83 offers. It’s way more than an off grid ham would ever need, but if you have money and insist on a professional-grade instrument, the 83V is a great pick.

For under $200 Fluke offers new digital multimeters perfectly suited for off grid use, with the 115 and 117 being the “sweet spot” of performance, quality, and price. B&K Precision and Siglent also make very high quality instruments. 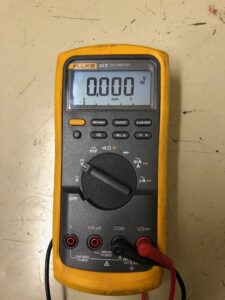 The Fluke 83V is a professional-grade multimeter. This unit will set you back over $400. OFFGRIDHAM.COM ORIGINAL PHOTO ©2020

Many digital multimeters will come with extras that look attractive but are either not truly needed or do not add enough value to make them worth having. Transistor testers, decibel measurement, and other obscure functions are all on the useless junk list. Anything with a lot of extra functions are what I call a “Swiss Army knife multimeter:” They can do all things sort-of well, but no one thing exceptionally well.

If you need specialty functions (and you likely don’t), buy instruments for your specific purpose. The photo below is a Swiss Army knife meter. Besides the Big Three it can also measure capacitance, conductance, and test transistors. Heck, why not throw in a bottle opener too? It all looks so impressive but there is just too much going on in one box for this meter to do all these tasks well. In my thirty-plus year career as a ham and a professional electronics technician, I never, not once, needed to measure siemens (conductance).

10 thoughts on “The Secret Life of Multimeters.”