Most radio amateurs have never even heard of Edison batteries. Edisons been around for over 100 years, and while they enjoyed some early popularity, they more or less left the scene by 1910. Lately though they’ve been getting more attention from the off grid community. So what’s the deal with Edison Batteries? What makes them different than the rest? Are they for you? Here we go….

Edison batteries, also known by the common noun nickel-iron (NiFe) batteries, were patented by Thomas Edison in 1901. This seems odd because Edison did not actually invent the device. That credit goes to Swedish researcher Waldemar Junger in 1899. The nickel-iron battery was supposed to be an improved version of the nickel-cadmium battery, which Junger also invented. He was never able to develop his nickel-iron battery into a practical technology so he abandoned the idea entirely, although he got far enough to earn a patent. Along comes Edison who brought his own ideas to the product, resulting in separate patents for what became the proper noun Edison battery.

Edison batteries were popular in early electric cars, then quickly faded into obscurity as gas engines took over the automotive market. For many decades after that, only niche applications used iron-nickel technology. Edison-branded batteries ended production in 1975 while other manufacturers continued to make generic versions in limited quantities to serve the few clients who still used them.

For the purpose of this article I will use the terms “Edison” and “nickel-iron” interchangeably. 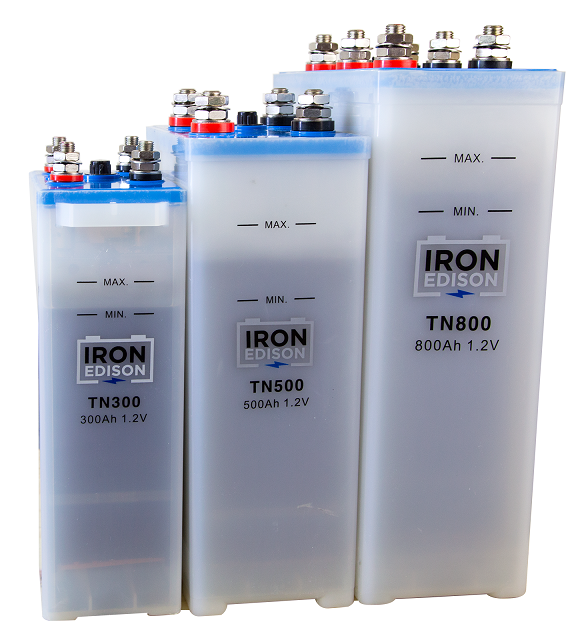 Are Edison batteries a good choice for the off grid ham?

There is a lot to consider before jumping into nickel-iron batteries. Whether or not they are a good option for you depends on your situation, needs, and budget. More importantly, are you willing to give up the battery technology you’re currently using and replace it with something totally different? Laying out all the pros and cons may help you decide.

Very long service life: This is probably the biggest selling point of nickel-iron batteries. They can last decades with simple maintenance. You’ll probably hand them down to your children and possibly grandchildren. These batteries are usually rated for a 30 year service life, but this is an understatement. There are 60-plus year old units still out there chugging along! It is likely the last battery you’ll ever buy.

Survivalists/preppers planning for a complete societal collapse logically also believe the collapse will end commercial battery production. Therefore, what you have when SHTF is likely all you’ll ever have and procuring replacements will be difficult if not impossible. If this is your mindset, nickel-iron batteries should be a very serious consideration.

Deep discharge capability: Up to 80% discharge is not harmful to nickel-iron batteries. This is comparable to modern lithium batteries and far superior to lead acid flooded batteries.

High self-discharge: Edison batteries will self discharge at a rate of 1% per day. This effects the overall efficiency of the battery (which we’ll address in a moment). It does not sound like a lot, but cumulatively that’s a lot of energy you’ll have to account for just from your batteries sitting there. Think of self-discharge as a hole in the bottom of a water bucket. The bigger the hole, the harder it is to keep the bucket full.

Low charging efficiency: Charging efficiency is another manifestation of the hole in our “bucket”. Nothing is 100% efficient. You’ll never get as much out of any battery as you put into it. Edison batteries run about 65% efficient when charging. If your battery is being fed by a 100 watt solar panel, thirty five of those watts will be lost right off the top. This is above and beyond any other system losses.

Mechanical complexity: Edison batteries are manufactured as 1.20 volt cells, so to get 12 volts you’ll need to connect ten of them in series. You’ll also probably need to buy or build a rack to hold them.

In addition to the cost of the actual battery, amateurs should consider adding more charging capacity to offset the low charging efficiency. The table below compares the characteristics of common battery types with iron-nickel. The numbers are rounded/averaged due to variations between manufacturers. The weight measurements are for a 100 amp-hour battery:

Things that may not matter, depending on your situation.

There are a few things about nickel-iron batteries that can be either pros or cons, or may not matter one way or the other, depending on your needs and priorities:

Low energy density: This may not matter if you have a lot of storage space and do not require portability. As illustrated in the table above, nickel-iron batteries are quite large and heavy for the energy they produce. It’s more than double the weight of a flooded lead battery of the same capacity, and about five times that of lithium!

True cost of ownership: When amortized over their service life, the real cost of Edison battery ownership is comparable to conventional batteries. It’s also a hedge against inflation. But for the average off grid ham, it’s quite a stretch to justify laying out thousands of dollars today in exchange for a payback spread over decades.

Very high up-front cost: Prepare for massive sticker shock. In 2020 a standard 100 amp-hour flooded deep cycle lead battery costs, oh maybe $100.00 or so? A lithium is around $875.00. A similar capacity nickel-iron version will hit you for over $1000.00. That’s not a typo. On the upside, the Edison battery may last beyond your lifetime. Off grid hams have to decide for themselves if the long term savings is greater than the one time front-loaded cost.

Where do we go from here?

Jumping into Edison batteries requires a great deal of careful thought and calculation. My honest opinion is that very few off grid amateurs would benefit from them. In my mind, exceptionally long service life and tolerance for abuse does not supercede the high initial cost and other compromises inherent to nickel-iron batteries. After all, there is a reason why this technology has not been mainstream for over 100 years and is now used only in very specialized applications.

But that’s me. Your situation may be different. No matter which side of this you may fall on, you now have some clarity on which to base a decision.