The off grid amateur radio world seems to revolve around solar. There’s a good reason for that: Solar has become easier, less expensive, and the required equipment is relatively hands off once it is installed. The other options have shown incremental improvements as well, but none have matched solar in terms of what you get for the money and effort. For the off grid radio amateur who wants to expand beyond solar, is wind energy the next likely step?

Why wind energy never quite caught on.
Off grid hams and survivalists have not embraced wind energy with the same enthusiasm they had for solar. For commercial applications, it’s a complete reversal: In 2015, industrial wind energy production in the United States outpaced solar 8 to 1 based on total kilowatt-hours. It’s not even close, and the gap is growing.

Why do very few off grid hams use wind energy? While the average radio amateur can implement solar on some level, wind is still comparatively expensive and complicated. In addition, wind energy is simply not practical below a few hundred watts. If all you want is to charge a handheld radio or run QRP, a five or ten watt solar panel is cheap, easy, and effective. There is no wind equivalent, although there are a few experimental/prototype models out there that show promise. Wind energy definitely benefits from economy of scale and that is one reason why large commercial installations are more common than small home units.

Also in the mix is considerable physical & structural requirements. Solar panels can be fitted almost anywhere, but wind energy hardware needs a sturdy mounting in a wide open space away from interfering objects. One also has to consider building codes and zoning ordinances. All of this makes wind a less attractive choice for off grid ham radio.

The market is flooded with small home wind mills (more accurately called wind turbines) priced from a few hundred dollars all the way up into the thousands. It can make a first timer feel overwhelmed and lost. Don’t worry. It’s not as complex as it seems and can be reduced down to a few basic principles.

Three phase power.
In my last article about inverter generators, we talked about the efficiency of three phase AC power and the many advantages it has over single phase AC, and by extension, straight DC power. It’s the same deal with wind energy.

A wind turbine will need a rectifier to change the three phase AC into a steady DC current that can be used to charge batteries or feed an inverter. These easy to install devices are sometimes included with a new AC wind turbine or can be bought on line for less than $25.00.

A three phase AC wind turbine will squeeze the most electricity per blade revolution and at lower wind speeds. It can use smaller wire from the turbine to the control electronics; many off grid hams use an ordinary inexpensive extension cord for this purpose. Some turbines have the rectifier integrated into the generator housing. Although these turbines are technically & operationally three phase, the net output will be DC and come with the caveat that thick, heavy (expensive) wire is needed in order to offset the high line loss built in to DC systems. Also, when the rectifier is integrated, it is much harder to replace if it fails. 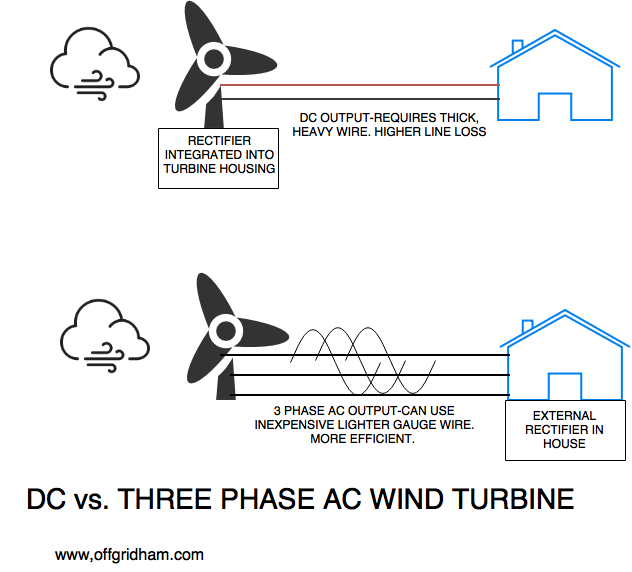 Although I strongly prefer AC over DC turbines, many off grid hams are very satisfied with their DC versions. The biggest factors in your decision will be: Is this for serious wind energy, or it is just an experiment/hobby? How much are you willing to spend? Can you make a DC turbine work even with the limitations?

Photo 1 shows the guts of a small home wind turbine. The square black device in the center is the integrated rectifier. The three wires connected at the top are the three phases coming off the yellow generator. The two wires on the bottom is the DC output. I suggest going with an external rectifier so you can take advantage of using smaller, less expensive wire between the turbine and your control point. By using an integrated rectifier, you give up some of the benefits of a three phase system.

Wind turbine placement.
Unlike solar panels, a wind turbine is a lot more tricky to install because physical barriers can make optimal placement problematic. A tree or building hundreds of feet away can drastically effect how much wind energy your turbine will produce. In general, you need your wind turbine placed well above and away from any obstructions.

Placement is usually the greatest barrier to effective wind energy production. Many if not most radio amateurs simply do not have enough open free space for a turbine to operate.

The laws of physics and why it matters.
Wind energy is cubed as the speed increases. This means a 20 mph wind speed does not produce twice as much energy as a 10 mph breeze; it’s actually eight times more powerful! Even small differences in wind speed can result in dramatic changes in net electrical energy.

The problem is this principle also works in reverse. It may seem sensible that a site with an average wind speed of 15 mph is not significantly better than one with an average speed of 12 mph…except that it is significantly better. A 3 mph increase can more than double the potential power. This is why a nearby obstruction that slows the wind down even a little can be the difference between an efficient, high-yield system and one that fails to meet even basic wind energy needs. 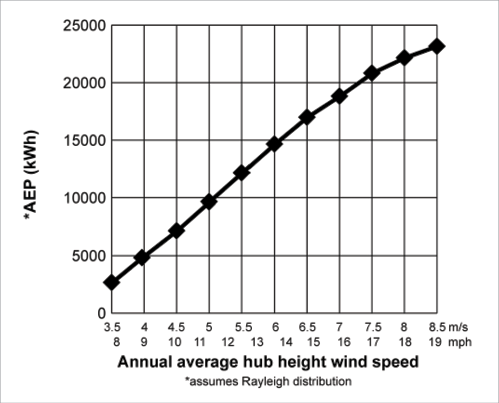 Can’t I just stick a turbine on my roof and call it good?
The short answer is no. Some off grid hams know they have a far less than ideal site for wind energy, yet they install a wind turbine anyway and hope for the best. Don’t do it! The installation will never convert enough wind energy into electricity to justify the cost and effort.

Those who want real-world useful, cost effective off grid power and do not have the proper physical space to install a wind turbine should not take any “shots in the dark.” Abandon the idea altogether and focus on expanding solar or upgrading other resources. I am loathe to talk anyone out of using wind energy, but here at Off Grid Ham we deal in the practical, not the conceptual. Wind energy just for the sake of having it is a dead end.

Wind turbine noise.
If you google “wind turbine noise” you’ll get a huge buffet of information and commentary. Wind turbine noise has even become heavily politicized. The good news for the off grid ham is that most of these issues involve large commercial wind farms. It needs to be understood though, that all wind turbines, even small home units, will make some kind of noise. Reading published research and watching YouTube videos showing examples of wind noise is somewhat helpful, but you really won’t know what you have until your installation is complete.

So where do you start?
The best way to take advantage of wind energy is to use it as a complement to solar. Since most off grid hams already have solar, much of the work is already done. You can usually run your wind turbine through the same charge controller your solar panels are already on. The only extra parts you will need other than the wind turbine itself and associated mounting hardware is a rectifier (if not already included) and a “dump load”.

Solar panels can sit in the sun indefinitely with no load on them but a wind turbine cannot be allowed to spin uncontrolled. So what to do once the batteries are charged but the wind keeps blowing? That extra power can be routed through a dump load to disperse the energy. Dump loads can be large resistors or a heating element that goes inside your water heater. In either case, it assures that your wind turbine always has a load on it.

Do not buy a wind turbine from retail home improvement stores or any of those tool retailers famous for cheap throwaway junk. Find a dealer who specializes in renewable energy. Most of these folks are very friendly and will gladly give advice specific to your situation. They may not be the least expensive, but you will get a good value for your dollar. The resources section at the end of this article lists some of my favorite dealers.

Contractors and dealers: The old cliché “buyer beware” is true.
I’m sometimes asked how to determine if a renewable energy dealer or contractor is reputable. Because wind energy is in the nascent stages of becoming mainstream, there isn’t a large history of experience to draw from. The best advice I can offer is to check on line reviews and ask the contractor direct questions about how many installs they have done and how long they have been in business. If possible, get references.

Some contractors will imply that their membership in trade & professional organizations is assurance that they are knowledgable and reputable. What you need to know is that anyone can plop down money and become a member of one of these groups. Simply being a member of an industry advocate group is not a verification of competence, nor proof that a business is honest. Likewise, having no affiliations with industry organizations is not an automatic red flag.

I am personally aware of someone who is a member of a very well known renewable energy trade group; he even uses their logo on his website. He markets himself as an “engineer” and “consultant” even though he has absolutely zero formal training or industry experience. Be very circumspect. The hustlers are out there.

About DIY wind turbines.
There are a lot of articles and videos on how to make your own wind turbine. Many of these projects are very effective and can produce a lot of electricity. If you are not on a tight timetable and like to tinker, then DIY might be worth your while. Off grid hams who do not want to reinvent the wheel and just want to get into wind energy quickly should stick with commercially made turbines.

Key points –what you need to know.

The Small Wind Certification Council has unbiased ratings for home wind turbines and compares them on equal terms.

The American Wind Energy Association is a trade group that serves the commercial wind power industry, but their website has excellent general background information for radio amateurs.

This great article from Homepower gives additional advice and information about wind energy.