In search of the “perfect” antenna.

A lot of off grid amateur radio involves compromises. We don’t have the same resources as grid-connected hams. Many off grid hams operate portable stations, which presents even more givebacks. One of the most common compromises is the antenna. When trying to go portable, having a “perfect” antenna is almost impossible. Even if you’re not portable, you probably have antenna challenges: Maybe you live in an apartment. Maybe you have to work within municipal ordinances or homeowner association restrictions. Maybe you have limited money (or an uncooperative spouse!). One way to make an imperfect antenna usable is with an antenna tuner. Antenna tuners are a misunderstood piece of hardware, especially in the realm of off grid amateur radio. Let’s try to sort it out.

What exactly does an antenna tuner do?

Every transmitter wants a specific value impedance load on its output. In this case the load is an antenna. Without getting too technical, impedance is a form of resistance where there is an opposition to current when voltage is applied. Impedance and its cousin reactance are found only in AC circuits (Yes, I know this is oversimplifying things. Please don’t pepper me with nit picky comments/emails). The unit is Ohms and the unit symbol is Z. For nearly all amateur equipment, the load (antenna) must be 50 Z for the transmitter to work properly. By the way, you’ll often see the symbol Ω (ohms) used to express impedance. This nomenclature is incorrect, but since it is so commonly (mis)used, it’s become unofficially accepted.

Sounds straightforward, right? Here’s the catch: Impedance varies with frequency. Even if you have the “perfect” antenna, it’s not going to be perfect everywhere on all bands. Impedance mismatches between the transmitter and the load (antenna) manifests itself in the form of a high standing wave radio (SWR). The farther you drift away from that “perfect” resonant 1:1 SWR frequency, the higher your SWR will be. SWR represents RF power reflected back to its source due to the difference in impedance between the energy source (transmitter) and the antenna. In extreme cases, the reflected power can damage the transmitter. This is the inefficiency an antenna tuner is designed to correct. 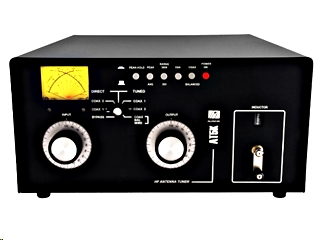 What an antenna tuner won’t do.

Way back when I was studying for my first ham ticket, an old Elmer wisely quipped, “all an antenna tuner does is lie to your radio!” He was absolutely right. Antenna tuners are not magic pixie dust for out of whack antennas. The deficiencies and compromises that existed before are still there. The only difference is that your radio will happily believe the lie and think it is transmitting into a perfect 50 ohm load, which technically it is.

An antenna tuner does not actually “tune” or make any electrical or physical changes to your antenna. All it does is create a correct 50 Z appearance for your transmitter no matter what the impedance of the antenna system really is. Think of it like the transmission on your car. You could not connect the engine directly to the wheels and expect the car to perform satisfactorily under all conditions. An an antenna tuner, like a car transmission, allows the power source to operate within a defined parameter even when the load varies.

I’ve seen a lot of inexperienced (or lazy) amateurs slap an antenna tuner on a compromised antenna and call it “fixed”. If you have no better options and must deploy a less-than-awesome antenna, then by all means use a tuner to make it good enough. It’s better than not being on the air at all! But to the extent that you can, fix the deficiencies at their source. Start out with the best antenna possible. 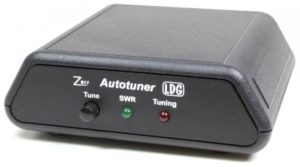 Even though automatic and manual tuners perform the same basic function, amateurs should understand some important differences between the devices. An automatic tuner is literally as simple as pushing a button. It calculates the match required for lowest SWR and adjusts accordingly. On a manual tuner you have to adjust the settings yourself.

An automatic tuner (at least the modern ones) typically do not have variable capacitors and inductors. They have banks of fixed value components. A microprocessor switches between different combinations of the capacitors and inductors. This is the ticking or buzzing sound you hear. Eventually the tuner finds the best combination to provide a 50 Z load. The ticking stops and you can proceed with your transmission. The process must be repeated for any significant change in frequency. The operation is seamless; just press a button.

The main disadvantage of automatic tuners is that there is a finite combination of possible settings. On a severely mismatched antenna system, your antenna tuner may have difficulty finding the 50 ohm sweet spot. Antenna tuners built into many popular radios are well known for this shortcoming. If the integrated automatic antenna tuner on your radio clicks and clicks but won’t pull the SWR down as far as you hoped, it’s because built in antenna tuners are only there to make minor tweaks. Anything more than that and you’ll need and external/outboard tuner as they typically offer a greater range of correction.

Manual tuners give you more flexibility. For example, if the “perfect” setting is between two fixed values in an autotuner, the computer cannot split the difference. It must choose one or the other. There will be a built-in factor of error. In a manual tuner, the operator can set the device to the exact best value. There is a natural level of refinement that cannot be duplicated by a computer because (theoretically) a manual tuner has an infinite number of settings.

Manual antenna tuners have the added benefit of making the operator feel like…an operator. It’s not plug and play. You have to know something and pay attention to what you’re doing. It creates a personal connection to operating radio that does not happen when you just push a button. Lastly, manual tuners are typically less expensive than comparable autos and do not require a separate power source unless there are other features on the device not related to the tuner, such as dial backlights or remote antenna switches.

There are not many disadvantages to a manual tuner other than you have to do the work yourself. I’ve used both manual and automatic antenna tuners and got good results from both. They each have their place; which is “better” depends on who you ask.