One of the perceived barriers to off grid amateur radio is the selection of solar panels. Most hams fall into one of two categories: Those who spend many hours researching the various options and end up more confused than when they started; and those who impulsively buy whatever is cheapest/easiest to find and end up with poorly chosen solar panels that do not meet their needs. This does not have to be hard. It’s time to cut the fluff and give radio amateurs the information they need to select solar panels that work for them and their wallet.

The Big Three.
There are three basic types of solar panels: Mono crystalline, poly (or multi-) crystalline, and thin film. The basic design of solar panels has been the same for decades. Advancements in the composition and purity of silicon, which is the main ingredient in solar panels, has made them more efficient. Improved manufacturing processes and economies of scale has made them cheaper. Solar panels that cost over $6.00 per watt a decade ago are now available for less than $2.00 per watt. Solar is on the cusp of becoming mainstream. If you don’t know much about solar panels, check out https://gienergy.com.au where you can learn more!

Monocrystalline Solar Panels.
Monocrystalline panels use the highest quality silicon cut into individual cells (thus the “mono” designation), which gives them their characteristic “cell” appearance. Because they use the highest grade silicon, they are also the most efficient and have the benefit of more watts per square foot. They are generally considered to be the “best” solar panels. As one might guess, they are also the most expensive.

Poly (or multi) crystalline solar panels.
Instead of cells being individually cut from a silicon ingot, the polycrystalline manufacturing process involves pouring melted silicon into a mold. They can have either a “broken glass” appearance, or look like one solid panel with thin wires to define the cells. The result is a less expensive but also less efficient panel. Polycrystalline solar panels are by far the most popular and account for a majority of the market. 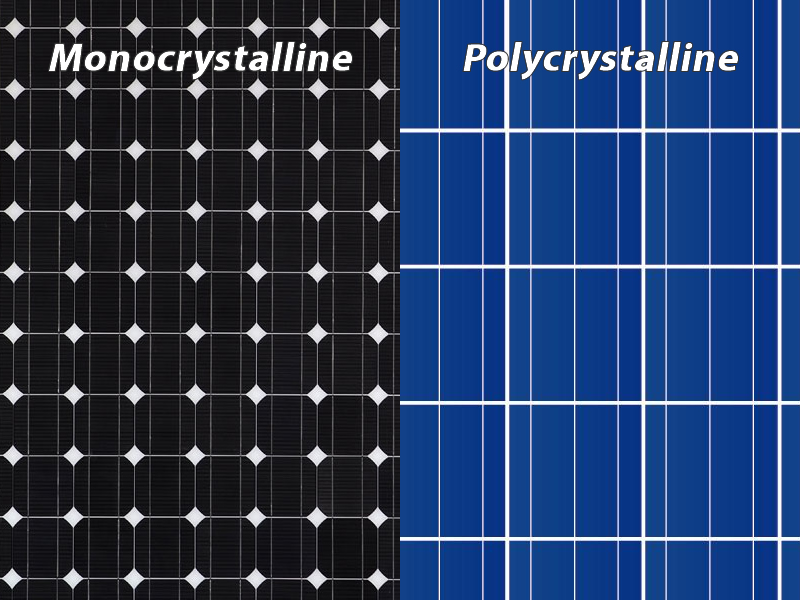 Mono vs. poly: “Better” is not what you think.
The technical differences between mono- and poly crystalline solar panels are very subtle to the radio amateur. Mono panels produce about 4% more wattage per square meter than polys, which makes them smaller for the same wattage output.

This sounds like it might matter, but with solar panels, better is not always better, especially when cost is factored in. Having good quality a deep cycle solar battery is also essential if you have solar panels.

Example: A 100 watt Renogy polycrystal panel commonly sold on line costs $124.00 and takes up 1055 square inches of space. Renogy also makes a monocrystal version of this exact same panel, except that it is $150.00 and 873 square inches.

Therefore, radio amateurs have to ask themselves: Is having a mono crystal panel that saves only 182 square inches over its poly cousin worth an extra $26 (per panel) for the same amount of power? Mono crystal panels also have a longer service life and a greater tolerance for extreme temperatures, but don’t read too much into the benefits: These low single-digit percentage advantages would mean something if you were building a 100 acre commercial solar farm, but for the off grid ham, what you get for what you pay in a monocrystalline application is very hard to justify.

Thin Film Solar.
The third major category of solar panels is thin film solar. These come in a few different variations, but the common theme is a silicon photoreactive semiconductor applied to a substrate, usually thick plastic. The fancy wording is simple in principle: They take the solar silicon material and use adhesive to stick it to a flat plastic base, kind of like a bumper sticker.

Most of the small panels sold in hardware and sporting good stores are from the thin film family. They can be identified by a flat black color in a lightweight (sometimes plastic) frame with wires forming lines across the panel.

Thin film solar panels have three big advantages: First, they are inexpensive when used at low power levels (more about that in a moment). Second, they are the easiest to find and can be bought almost anywhere. Lastly, they can be flexible and formed into many shapes. Portable fold up/roll up solar panels popular with campers & outdoorsmen are made with the thin film process. If you cannot lug around a hard, inflexible panel in an aluminum frame, then thin film is the solution.

The main disadvantage of thin film solar is low efficiency, usually below 10% as compared to 13%-19% for monos and polys. Thin film solar panels give diminishing returns as the power level goes up. At higher powers above 60 watts you could end up with thin film solar panels that are substantially larger and cost more than a poly or mono crystal; as the technology improves this dynamic is becoming less of an issue.

Although thin film is considered the lowest class of solar panels, do not take that as an automatic deal breaker. There are many applications where thin film is the only and best option.

So what should you buy?
What to buy is a personal decision because everyone’s needs are individual. If ultra-portability is not a major issue, then polycrystalline solar panels provide the best value for the dollar. I personally use only polycrystalline solar panels for my permanent home system. Because of their popularity, they come in many sizes and are very competitively priced. Their slightly lesser performance compared to monocrystalline panels is more than offset by the reduced cost.

If you must have the very best and don’t mind spending the money to get it, or your space is so limited that even a few square feet makes a difference, then monocrystal solar panels are for you. Keep in mind that “the best” is going to cost substantially more than second best and give you only very minor increases in performance.

If you need portability, want to fold or roll the panel, or if the panel will need to be formed into an unusual shape, then the only option is thin film. I use a 25 watt thin film panel to run my portable QRP radio and get great results. The panel folds neatly into a small package and fits in a backpack.

What you need to know–key points.

Most of the data about solar panels that’s out on the internet is not inaccurate, it’s just hard to figure out what matters and what doesn’t. Today we’ve cut through the chatter and focused on the big picture from an amateur radio operator’s perspective. The service life of a solar panel can run over two decades, so the decisions you make now will be around for a long time. With the right knowledge, you can make confident choices that you won’t regret later.

To learn more about other off grid ham radio solar options, check out my previous article, Solar Panel Kit Systems: Unwrapping The Package

13 thoughts on “A Radio Amateur’s Guide To Solar Panels.”