So you’ve had your fun with small single solar panels and are ready for a larger multi-panel system that can handle beefier loads. Hopefully you’ve read previous Off Grid Ham articles and have your system all planned & spec’d out. There’s one important detail we haven’t covered on this blog before: How should you configure your solar array? A solar array can be wired in series or in parallel. We’ll go over both and help you make the best choice for your situation.

What’s the big deal?
It may seem like an article on how to plug in a solar panel is over explaining a simple concept, but stay with me on this one. The physical act of hooking up a solar array actually is simple. But do you know the pros and cons of the two main methods? Is one method better than another? Why are you doing it that way? Just plugging stuff in will get the job done but it’s not necessarily instructive. We’re here to address the why, not the how.

Panels in series.
Wiring your solar array in series increases the voltage to the sum of all the panels. The current will go down, which means you can push more power through the same size wire (more on this in a moment). This makes for better efficiency, but an MPPT charge controller is required to convert your solar array voltage to 12 volts on your battery. The maximum voltage output of your solar array is limited only to what your controller can handle. Connecting the panels is very straightforward. Simply plug the positive of one panel to the negative of another and chain them together. 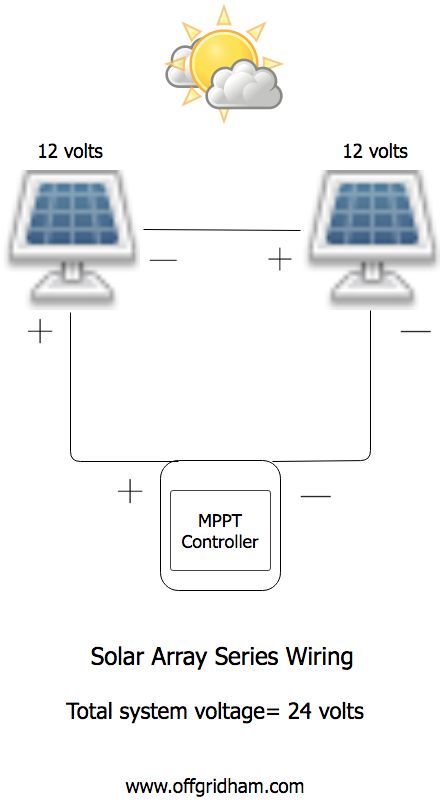 In it for the long haul.
DC power is inherently “lossy” compared to AC power when sent down a long wire. Bumping the voltage up by wiring your solar array in series will minimize the loss if the wire run between the panels and the controller is particularly long.

Can I wire mismatched panels in series?
The short answer is yes, but there’s a huge catch. Mixing solar panels of different capacities in a series array is going to have some very negative effects. Suppose you have a 50 watt panel and 100 watt panel wired together in series. At first glance it may seem the total system capacity is 150 watts. It doesn’t work that way.

The maximum current running though your series solar array will never be higher than the lowest capacity panel. This will not damage anything and it will technically work, but you are seriously hobbling your system. 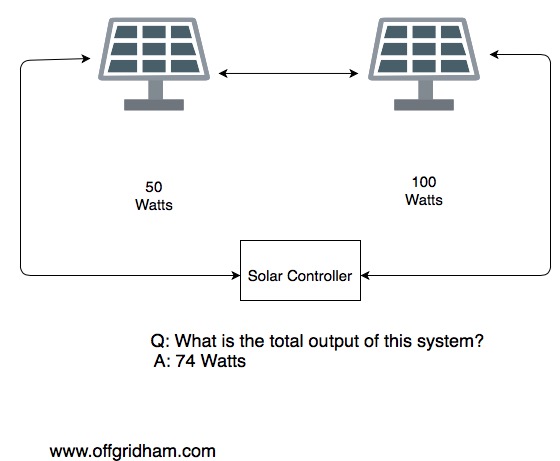 In electronics, current will always be the same at all points in a series circuit, and in this example the 50 watt panel tops out at 2.78 amps. So that’s all the larger 100 watt panel will do too even though it is capable of more.

If you want to geek out with the theory and math behind this, read up on Kirchoff’s Current Law.

Panels in parallel.
Parallel wiring is the other method you may want to consider for your solar array. All the panels have to be the same voltage, but unlike series arrays they can be different wattage/current because each panel is its own independent circuit. You will probably want to terminate the positive and negative wires from each panel onto a common negative and positive bus and then feed it to the controller. 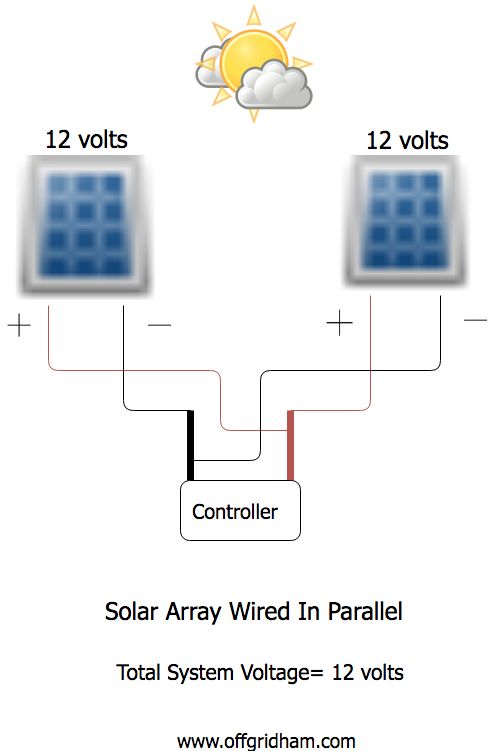 Built in backup plan.
One great advantage of the parallel wired solar array is that a failure in one branch will not disable the entire system. You will have reduced power, but at least you won’t be left completely without juice. In the diagram above, notice that a breakdown in either branch still leaves at least one panel with a complete circuit to the controller.

Another nice aspect is that expansion is as easy as adding another panel and terminating it on the bus. You do not have to change anything on your controller or break into the existing wiring.

What you need to know.
Knowing the why will help you determine the how. Series or parallel…there is no “correct” method, but you should go into it understanding the pros and cons of each and have a clear idea as to why you made your choices.