Few hams who use solar panels know how their panels work, or how they are made. Of course, it’s not necessary to know any of this in order to use them. Still, having a basic knowledge of solar panels makes one a more well rounded, technically literate radio amateur. If you’ve wondered what goes on inside solar panels and how they are made, this one’s for you!

Physicists define “matter” as anything that has mass (weight) and occupies space. Meanwhile, Albert Einstein stated that energy cannot exist in the absence of mass. Light does not have mass and is therefore is not matter. How can light have energy without mass? Doesn’t this bust Einstein’s theory? No.

Einstein’s E=mc2 equation applies only to “resting” or “invariable” mass. Einstein also had a second theory that applies to momentum, E=pc, where p is momentum. The equation basically states that momentum has energy even in the absence of mass. In other words, something that has momentum (movement) but no mass does indeed have energy.

Light may not weigh anything, but Einstein’s momentum equation explains how it can act as it if did. That is the essence of how solar panels work; we’ll go into the details shortly. The force (momentum) of light striking an object transfers energy to that object and “pushes” against it. This effect gives the practical effect of having mass. It is not the same as actually having physical mass.

The effect of momentum.

Suppose we had a scale that was super-ultra-sensitive and we placed it in a dark room. If we shine a light on the scale, it will register a weight. The indication on the scale would not come from the “weight” of the light,. It would come from the momentum of the light acting upon it. This is how light can have energy without having mass. Any object technically weighs less when it is in the dark compared to in the light due to the “pressure” of light acting on it.

This quickie explanation of Einstein’s theories obviously leaves out a lot of detail. There are scientists who have dedicated their entire careers to analyzing Einstein’s work, so we’re certainly not going to cover everything here. The main takeaway is that although light has no mass, it does have momentum and that is the origin of its energy potential.

So what does all this geeky Einstein stuff have to do with solar panels? In a word, everything. Solar panels are made from silicon, and silicon is a semiconductor. A semiconductor is a material that has an electrical conductivity value that is less than known common conductors and greater than known common insulators. It can be a conductor when it needs to be and an insulator when it needs to be.

Imagine a thin, flat slice of silicon. The electrons in the silicon are bonded to their respective atoms, but the bond is not particularly strong. It would not take much energy to knock electrons off those silicon atoms. Along comes a single particle of light, called a photon. That photon began its life on the Sun and travelled 93,000,000 miles to Earth. It slams into a silicon atom with enough energy to knock off one of the electrons. Now imagine this process being repeated over and over for every silicon atom in your panel. 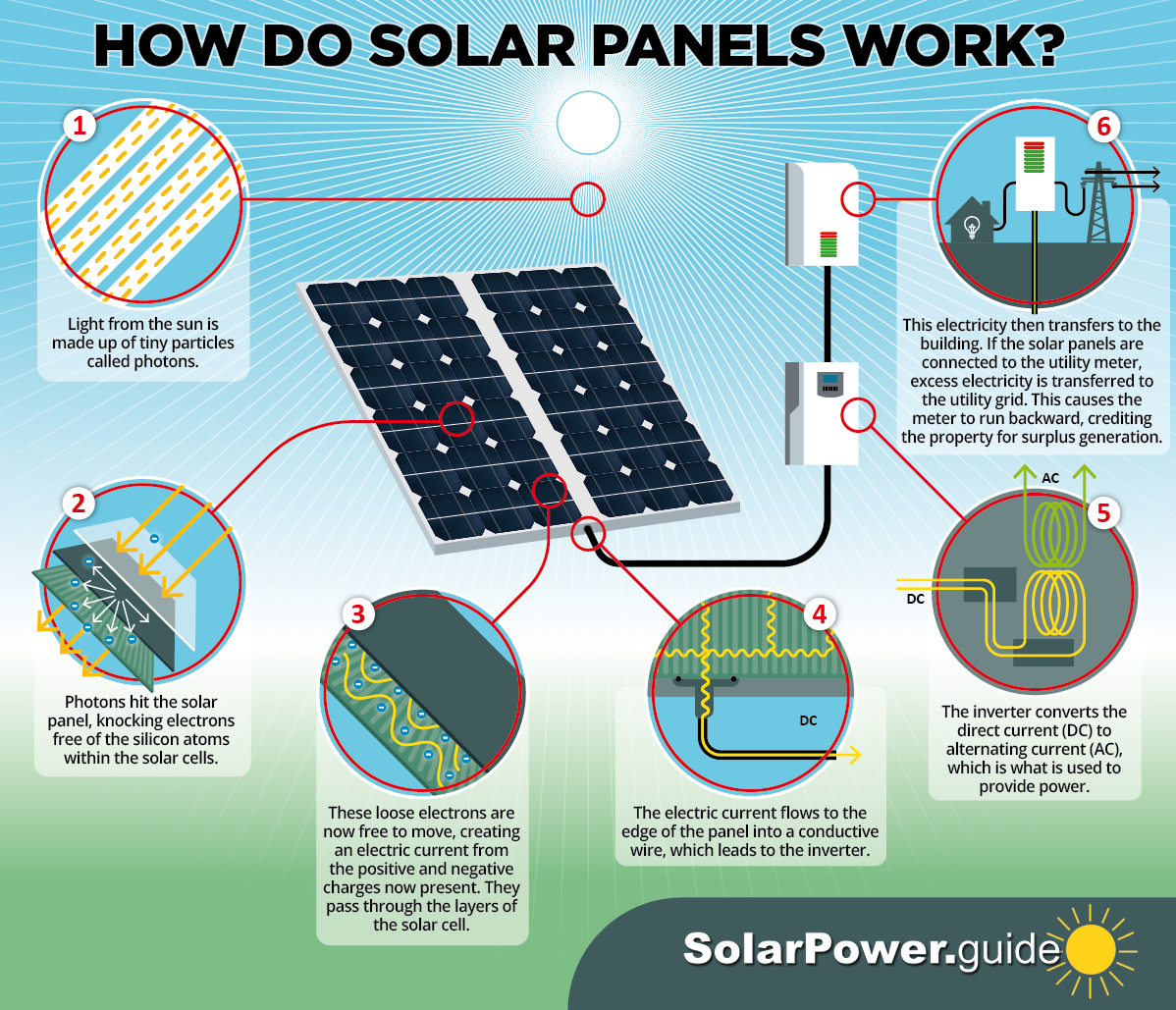 The loose electrons are free to move around. Collectively, they become a measurable electric charge or current. The current is ultimately routed to a battery for later use or to your radio for immediate power needs. None of this would be possible but for the principles of particle physics.

Atomic theory is cool, but how do we adapt it to something practical? First there is the issue of turning raw silicon into a useable form. This a good news-bad news proposition. The good news is that silicon is the second most plentiful element in the world, second only to oxygen. The bad news is the silicon has to be highly refined and purified under very high heat.

At some point in the process the silicon is mixed with additional elements, usually boron, phosphorous, gallium, or some combination of these. This creates the positive and negative charges that allow the silicon to pass current.

The melted mixture is poured into molds to form ingots. From there, the ingots are sliced into very thin wafers and treated with an antireflective coating. The panels themselves are made by arranging enough wafers or cells onto a substrate base to get the desired voltage. Then a clear plastic faceplate is fitted  to let the light in, and an aluminum frame to hold it all together.

Most solar panels are assembled entirely by robots and automation. When you buy a new panel, there’s a real good chance that you’re the very first human to touch it.

Where solar panels are made.

Asia is the source of a majority of solar panels on the market today. Mission Solar and some (not all) Panasonic panels are made in USA, as well as a few other niche manufactures. Unfortunately, it’s virtually impossible to get a truly 100% made in USA solar panel because even the domestic manufactures rely on globally-sourced materials.

The environmental impact of solar panels.

Although the energy produced by solar is “green,” the process for manufacturing solar panels comes with a lot of environmental baggage. For starters, silicon is refined in arc blast furnaces that consume an incredible amount of electricity. The aluminum used for the panel frames also require a lot of electrical power to produce.

Hazardous substances such as hydrochloric acid, sulphuric acid, nitric acid, hydrogen fluoride, and acetone are used in the manufacturing process. Thin film solar (the small flexible panels) are the “dirtiest” of all. They involve the use of gallium arsenide, cadmium-telluride, and other hazardous chemicals.

I could not find any reliable data on how much carbon and toxic waste is generated in the manufacture of solar panels. To get an accurate number, one would have to factor in the energy needed to mine & prepare the raw materials, transportation, and disposal of the waste products. I don’t know how this compares to conventional energy sources. Suffice it to say when taken in its entirety, solar does not exactly live up to its squeaky clean image.

The end of a solar panel’s service life also brings a few unpleasant truths. Recovering the clear plastic face, aluminum frame, and copper interconnections is straightforward. These materials are financially viable as scrap and can be easily repurposed. The silicon solar cells are another matter. There is credible data indicating that, as of 2021, it is cheaper and easier to mine & process new silicon than to recycle the old. After all, silicon is the second most plentiful element. It’s not like we’re going to run out. Stripping the silicon from old panels requires additional hazardous chemicals and energy with no meaningful cost savings vs. refining new product, so why bother? Some studies have determined that only 10% of retired solar panels are fully recycled.

If no reasonable process is developed for recycling silicon from old solar panels, we are just a few years away from being stuck with millions of tons of useless solar-related toxic waste. We are still in the early period of solar energy, so not enough solar panels are coming off line (yet) to make this a high profile problem.

Here is a really good plain language explanation of light and Einstein’s theories.

Here is an in depth article about the problems with recycling solar panels, including additional information about the unique issues around thin film solar.

10 thoughts on “The Secret Life of Solar Panels.”