Thanks to advances in technology, off grid power is a lot cheaper and easier than in the past. One area that barely changed for decades was generators. Since the time of Edison, it was straightforward: A mechanical power source turns a magnet inside a copper coil and creates electrical current. That changed with the introduction of inverter generators.

The earliest ancestor of inverter generators as we know them today was the Honda EX300, which came out in 1987. It had some shortcomings, the most notable of which was its square wave output. This limited its usefulness, and it was only marginally better than conventional generators. It took Honda just a year to correct the deficiency. In 1988 they released the EU9i which had a true sine wave output. Since then, the technology Honda pioneered has been replicated by dozens of manufacturers and inverter generators are now widely available. 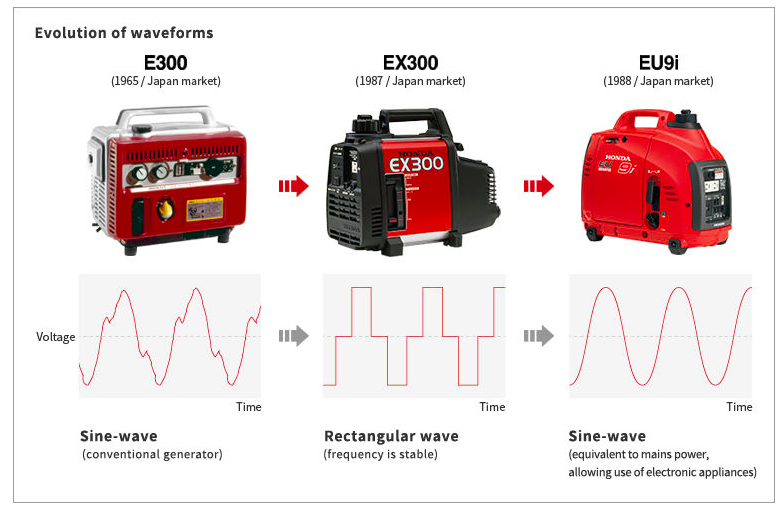 GRAPIC COURTESY OF THE HONDA CORPORATION.

How inverter generators work.
In previous Off Grid Ham articles, we discussed conventional generators and inverters. Inverter generators are a marriage of these two concepts. A mechanical engine still turns a magnet in a copper winding just like in the old days, except that in the case of inverter generators, the generator produces high frequency, three phase electricity which then goes through a two step process to become regular AC power like what you use in your home. 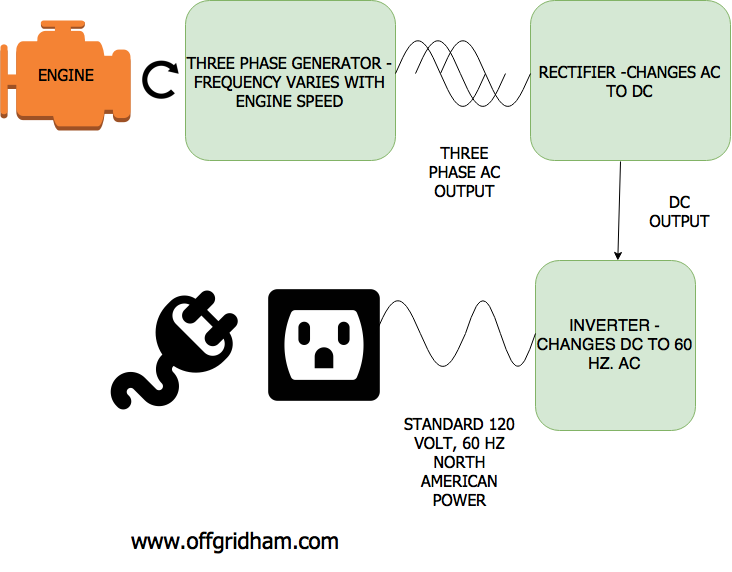 The three phase power is key to the function of inverter generators. The power in your house, and what comes out of inverters, is single phase. This term is just what it sounds like: A single sine wave that changes in a regular pattern with time and voltage.

Three phase power is three sine waves or electrical signals overlapping each other. This provides more power in the same amount of time and is much more efficient. Notice in the three phase waveform diagram below that the voltage never goes to zero. The declining voltage or “valley” of one phase is filled in by the peak of another. Many industrial motors are designed to run on three phase electric but it cannot be used for ordinary consumer applications.

Inverter generators convert the high frequency, three phase AC into DC current via a solid state rectifier, and from there the electricity goes into a conventional 60 Hz. full sine wave inverter not much different than what a lot of off grid hams already use. After that, you just plug your stuff in and power up. 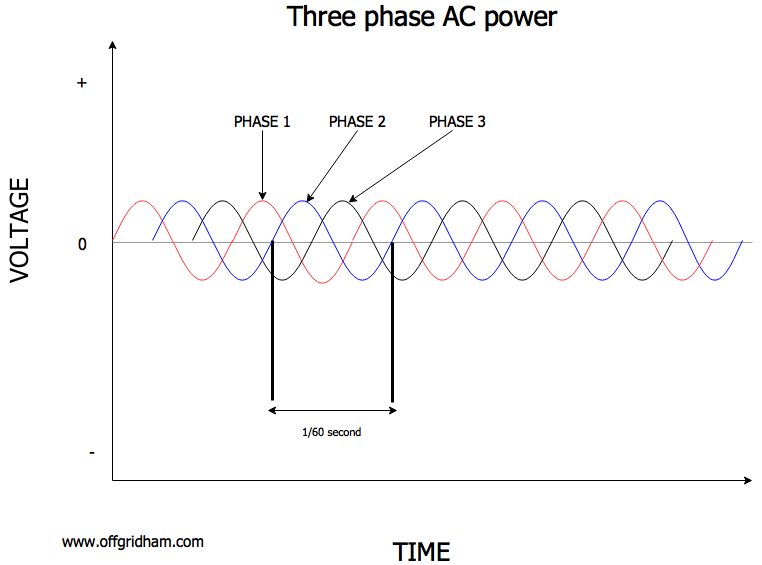 Inverter generators vs. conventional generators.
Standard generators depend on the speed of the engine itself to create the single phase 60 cycle sine wave that all North American devices use. Each rotation of the engine produces one cycle. To produce acceptable 60 cycle AC, we need sixty rotations every single second, or 3600 revolutions per minute.

Standard generators must maintain exactly 3600 RPM at all times, under all loads and conditions. This is usually done by mechanical governors that automatically adjust the throttle to maintain the speed. Some higher end standard generators have electronic engine controls or can run at slower speeds to get 60 cycles per second, but the basic idea of maintaining a constant RPM is the same across all versions of conventional generators.

The drawbacks to this system are obvious: The purity of the power depends largely on the mechanical properties of the generator, and the inexpensive gas generators on the market today do not instill much confidence in their ability to deliver stable & reliable long term electricity. Any drift from that 3600 RPM speed will mess with the frequency of the line current. In addition, a small engine turning at 3600 RPM all the time will consume a lot of fuel, make a lot of noise, and need more frequent servicing. Imagine if you had to hold the gas pedal of your car to the floor and race the engine at its limit no matter how fast you actually wanted the car to go. 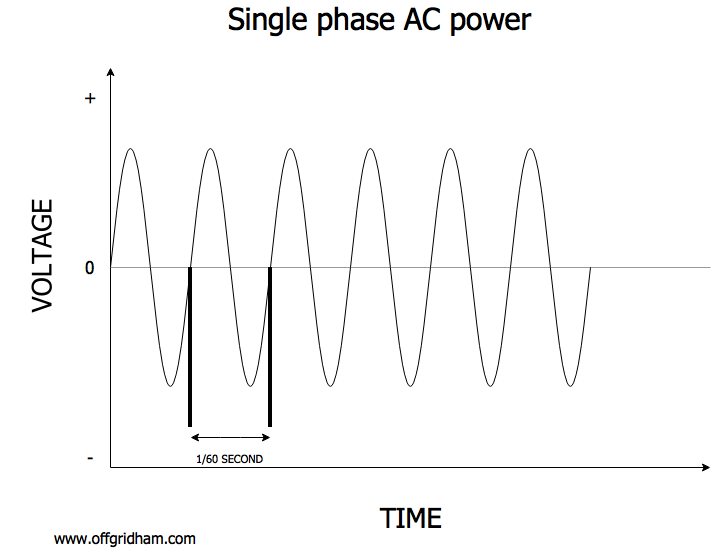 Inverter generators solve many of these problems. Three phase power produces more electricity for each rotation, so the engine can be substantially smaller for the same output. More importantly, the engine speed is not critical. As the load changes, the engine can power up or idle down to meet the need. A smaller engine not having to “scream” at 3600 RPM all the time runs quieter. Much quieter.

As the engine speed changes, the frequency of the three phase output will also change. As we already discussed, this would be a huge problem in a conventional generator, however, since inverter generators convert variable frequency AC into DC before going into an inverter, it does not matter. This is how inverter generators can produce a stable 60 Hz AC output even as the rotational speed of the engine varies.

The other big benefit of inverter generators is noise, or rather, the lack of it. Anyone who has ever used a small conventional generator knows they are obnoxiously loud! In a survival/SHTF situation where you do not want everyone for three blocks in every direction to know you have power, this is very problematic. Even under less critical conditions you’ll have to consider the personal comfort of yourself and others.

Because inverter generators have smaller engines that do not constantly need to run full blast, they are inherently quieter than conventional models. They are so quiet you often can’t even hear them running until you walk right up to them! If stealth is a priority, then inverter generators are your only real option.

Lastly, inverters have a significant weight and space advantage. With a smaller engine and more efficient three phase power production, inverter generators are substantially lighter and smaller than their conventional cousins. As an added bonus, parallel kits allow you to connect two small inverter generators together to act as one larger unit. This offers the flexibility of transporting the generators separately or leaving one behind if the power need is not great. With conventional generators, you’re stuck lugging that big single chunk of machinery around whether you need its full capacity or not.

The other side of the story.
Not everything about inverter generators is awesome. There are some disadvantages that the radio amateur will need to be aware of before making a decision.

Cost: There is no way around it. Inverter generators will cost at least twice and maybe up to eight times as much as comparable conventional units. The high tech used in the three phase system along with microprocessor controlled rectifiers and inverters all bump up the price point. The higher the power level, the greater the price disparity with 3600 RPM units.

The 3000-8000 watt “doughnut hole”: Somewhat related to the previous point about capacity, there is a gap between 3000 and 8000 watts where inverter generators are either too expensive or do not exist, and slow turn diesel generators that are not readily available. If your power needs fall within this doughnut hole, then you may have no option other than a conventional “screamer” generator.

Security/risk of theft: As an expensive power tool that is small, easy to carry, and has a high street value, inverter generators are a perfect cash crop for thieves. Stealing them is so common that aftermarket vendors sell antitheft kits specifically designed for inverter generators. If you own an inverter generator, be aware that you are a particularly desirable victim. Secure your assets and maintain strict operational security (OPSEC); do not shoot your mouth off to everyone about your cool stuff! They can’t steal what they don’t know you have.

So what should you buy?
Honda was first to market with an inverter generator and since then everyone else has been playing catch up. Their venerable EU200i is the uncontested king of the hill and the one all others try to emulate. Currently selling for about $1000 each, they are a major investment, but with basic maintenance they will run for decades.

Inverter generators are sold under literally dozens of brand names. Some are very competitive with the EU200i in price and build quality, but the market is also flooded with cheap knockoffs. All of them will work well initially. The difference is that the low end inverter generators will begin to have problems after even moderate use because manufacturers cut corners to keep the cost down. You really do get what you pay for. Because of the technical complexity of inverter generators, do it yourself fixes are difficult if not impossible.

My advice is to “buy once, cry once” and spend more on a solid unit that will not break down in the first place. There are tons of on line reviews and YouTube videos for pretty much every inverter generator on the market, so do your homework and don’t settle.

If you want to avoid hours of sorting through confusing reviews and data, skip to the end and get any of the generators in the Honda EUxxxxi product line. While you’re at it, also get an extra spark plug or two, a quart of oil, an air filter, and a fuel filter. With these modest provisions you should be able to keep your Honda running for years.

Key Points –what you need to know about inverter generators.

This .pdf by the ARRL gives additional background about inverter generators.

This Honda web page has an interesting history of inverter generators and explanation of their current technology.

Inverter generators are a big investment but when properly selected will provide years of quiet, reliable power. Understanding how they work and their advantages and disadvantages will help the radio amateur better plan for off grid power needs.

12 thoughts on “Inverter Generators: What You Need To Know.”